Rigondeaux: I Wanted To Show Critics I Can Fight at Short Distance

Eventually, that strategy did not play well for Ceja. Rigondeaux, a former Cuban Olympian, ended matters at 2:59 of the eighth round with a powerful left hook that detonated on Ceja’s chin to score a TKO victory in the WBC super bantamweight title elimination match.

“People were saying that I get on the bicycle and run a lot,’’ Rigondeaux said. “Well that’s not true so I wanted to show them I could fight in short distance and I wanted to get a couple of rounds in. Then that left hand came and ended the fight.” 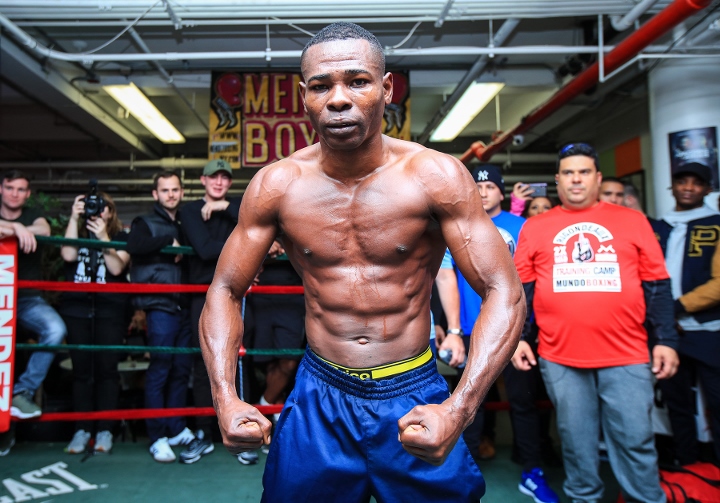 Rigondeaux’s punch landed cleanly, sending Ceja backwards on the seat of his pants. He got up to beat the count, but referee Russell Moore took one look into Ceja’s eyes, which were crossed, and waved off the fight to give Rigondeaux a thrilling victory.

"I knew I was going to catch him with the left, but it wasn't there in the beginning. I knew in the later rounds that I could use it and actually catch him. We practiced that every day and it paid off," Rigondeaux said.

With the win Rigondeaux gets a chance to climb back into the championship ranks. He is in line to fight the winner of the WBC super bantamweight title match between Rey Vargas and Tomoki Kameda.

Ceja rocked Rigondeaux with a pinpoint four-punch combination to the head in the sixth round. But Rigondeaux recovered quickly and fired his own combination. The back-and-forth action was so fierce that Moore took away a point from both Rigondeaux and Ceja for low blows during an exchange in the seventh round.

Idk why he fought the way he did. Screw what anyone thinks about how he fights.

[QUOTE=pesticid;19855720] In hindsight, going 2 weight classes up against a younger, bigger, stronger and more active Loma, Rigo simply didn't stand a chance. Has there been any other fighter at the lower weight classes that has fought in his late…

HE did not look good here. It's close to the end for him. He should not have been life or death with a guy of this skillset. It reminded me of Lara against Hurd.

I think his legs are gone

Nah, I don't think that was it at all. Rigo fought this way because this is the only way he can fight now. His legs are completely gone at 38. Same thing has happened to Erislandy Lara. Fighters like Rigo…