The final bell for his previous fight served as a sense of relief for Richardson Hitchins, not because he feared the outcome but more so of it being the end of a night he wanted to forget.

It wasn’t until he had begun preparation for the next one did he find appreciation in having survived a stiff test.

“I was down on myself after my last fight,” Hitchins (10-0, 5KOs) told BoxingScene.com of his Showtime-televised win over Kevin Johnson last November. “Looking back, though, I realized he’s a difficult guy to fight in the ring. His ring IQ and reflexes are sharp and he was scrappy. He came at me with a lot I hadn’t seen as a pro, which I should’ve known because he saw it as his big opportunity if he beat me.

“A lot of that played a part in the fight, but it forced me to offer something different. If I came with anything less, I would have lost. It was a clean win even though it wasn’t me at my best. But it’s a win where I learned a lot, which only makes me better.” 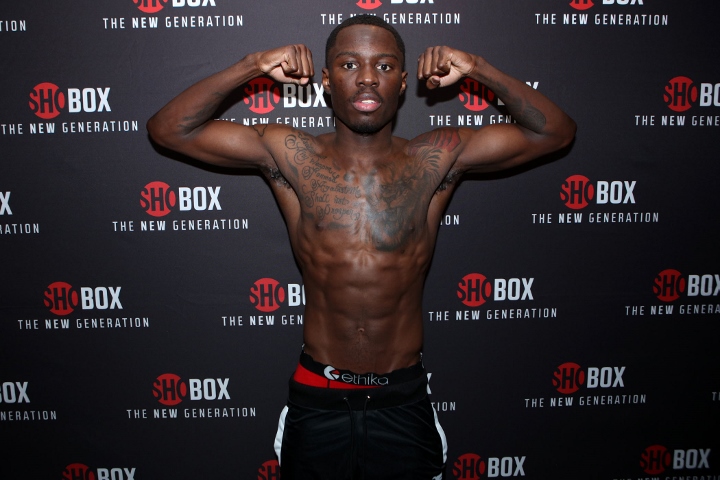 Brooklyn’s Hitchins has a second chance at a lasting impression this time around. The 22-year old former amateur standout—who represented Haiti in the 2016 Rio Olympics—returns to Showtime and Sam’s Town Casino in Las Vegas, as he faces Rhode Island’s Nick DeLomba (16-2, 5KOs) as part of a Shobox tripleheader (Friday, Showtime, 10:45pm ET/7:45pm PT and local time).

“I don’r see DeLomba posing the same threat as (Johnson),” Hitchins believes, though obviously coming in prepared for the best available version of his opponent. “He’s a bit slower, doesn’t move his head as much. His best chance is to pressure me and make it an ugly fight.

“I think his style will make me (shine). I don’t see this fight going the full 10 rounds. I’m going to make a statement (on Friday), let this fight be my steppingstone to a big year.”

As part of a televised tripleheader, Hitchins will have to share the spotlight a pair of fellow young guns. Kevin Newman II (11-1-1, 6KOs) faces Genc Pilana (7-1-1, 4KOs) in a 10-round super middleweight bout, while unbeaten second-generation boxer Keith Hunter (11-0, 7KOs) headlines versus late replacement Sanjarbek Rakhamanov (12-2-1) in a rematch to their tough scrap in this very venue last April.

It’s a similar formula to Hitchins’ previous ShoBox appearance, though his win ultimately lost in the shuffle by the time Xavier Martinez (15-0, 11KOs) made a huge statement with a 1st round knockout in the evening’s main event. All the right moves have been made to ensure far greater buzz will be generated this time around.

“This is my second 10-round fight and I feel much better than last time,” notes Hitchins, who spent a significant part of training camp at the Olympic Training Center in Colorado Springs. “That last fight with Kevin Johnson was my first 10-rounder and I didn’t know how my body would feel.

“I’ve prepared much better this time around, having been out (in Colorado) for weeks. That Las Vegas air won’t be nothing. You’re going to see how much I learned from my last fight, and how big of a difference it’s going to be in this fight.”