Triller apparently agreed to pay an enormous amount of money for the exclusive streaming rights to the Mike Tyson-Roy Jones Jr. boxing exhibition.

CNBC reported in a story posted to its website that owners of the emerging music sharing platform paid “north of $50 million” for the brand awareness they hope to gain by streaming Tyson-Jones on pay-per-view. Triller is considered competition for TikTok and other social media platforms, but Tyson-Jones will be the first live sporting event it offers on pay-per-view.

Boxing pay-per-view shows typically are distributed through cable and satellite companies for television viewers and network or streaming services apps for computer, tablet and phone viewers. 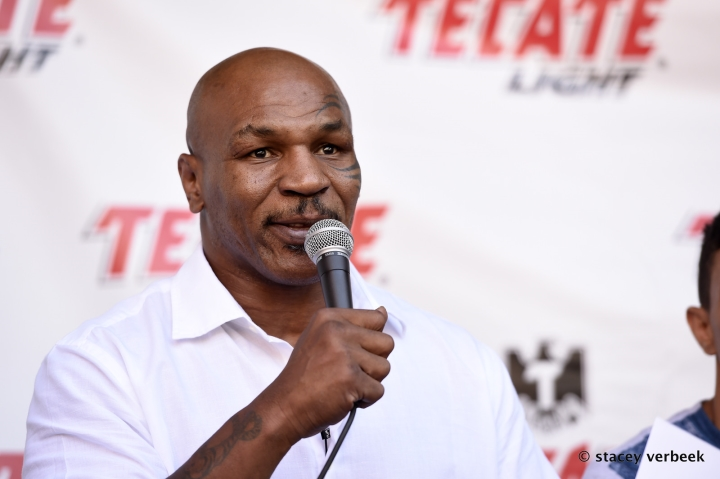 Tyson and Jones are scheduled to compete in an eight-round exhibition September 12 at Dignity Health Sports Park in Carson, California.

Triller hasn’t announced the pay-per-view price for Tyson-Jones, but the event has received a lot of mainstream media and social media attention since the news broke Thursday.

Tyson told TMZ that he’s “not getting anything” for fighting Jones and that his compensation will all go to charity. Jones indicated to TMZ that he could make as much as $10 million if pay-per-view sales are strong.

Andy Foster, the executive director of the California State Athletic Commission, has emphasized to BoxingScene.com and other outlets that Tyson-Jones shouldn’t be promoted as anything resembling a legitimate boxing match. Foster has assured that the 54-year-old Tyson and the 51-year-old Jones will “move around” with each other, despite what Tyson and Jones have stated during numerous interviews since Thursday.

Triller is contracted to produce a 10-part documentary series on Tyson-Jones leading up to the event as well.

The enigmatic Tyson had hinted about a comeback of some sort in numerous short training videos released over the past few months. Tyson (50-6, 44 KOs, 2 NC), a three-time heavyweight champion who was a phenomenon before Buster Douglas knocked him out in February 1990, hasn’t competed in a non-exhibition since he refused to continue after the sixth round of his fight against Kevin McBride in June 2005 in Washington, D.C.

Lennox Lewis, Danny Williams and McBride defeated Tyson by knockout in three of his last four fights. The Brooklyn native retired after McBride beat him.

Jones (66-9, 47 KOs) never announced his retirement, but the former four-division champion hasn’t boxed since February 2018. In his most recent bout, Jones defeated Scott Sigmon (34-14-1, 17 KOs) by unanimous decision in a 10-round cruiserweight contest in Pensacola, Florida, Jones’ hometown.

Boxing’s former pound-for-pound king captured the WBA heavyweight title when he out-boxed John Ruiz and won a 12-round unanimous decision in March 2003 at Thomas & Mack Center in Las Vegas.

Jones didn’t defend that heavyweight crown, even though there were rumors then that he would fight Tyson for a huge purse. He instead moved back down to the light heavyweight division for his following fight, a 12-round, majority-decision victory over Antonio Tarver in November 2003 at Mandalay Bay Events Center in Las Vegas.

Tarver stopped Jones in the second round of their immediate rematch in May 2004, also at Mandalay Bay Events Center. Jones lost by knockout out four times thereafter, including a ninth-round defeat to Glen Johnson in his next bout, but the 1988 U.S. Olympian continued to fight for 13 more years.

Will people really pay ppv for this? I wont be.

Am sure it would be on free YouTube within hours.

Only halfwits would pay to watch such garbage.

Nice! Good For Them! I will be watching for sure!

Nate Robinson vs Jake Paul on the undercard. They got me to purchase. Nates that dude and both Jones and Tyson are all time faves.