During a recent Sky Sports' episode of 'The Gloves Are Off' - junior welterweights Josh Taylor and Regis Prograis sat at the same table and argued about the severity of a “headlock” incident when they met in a casino.

The incident took place before a deal was finalized for their unification finale in the World Boxing Super Series - which takes place on Saturday night at The O2 Arena in London.

According to Taylor's version of the incident, he roughed up Prograis a little bit by placing him a headlock. He claims Prograis panicked.

"I put him in a headlock, he didn't know what to do," Taylor  said. 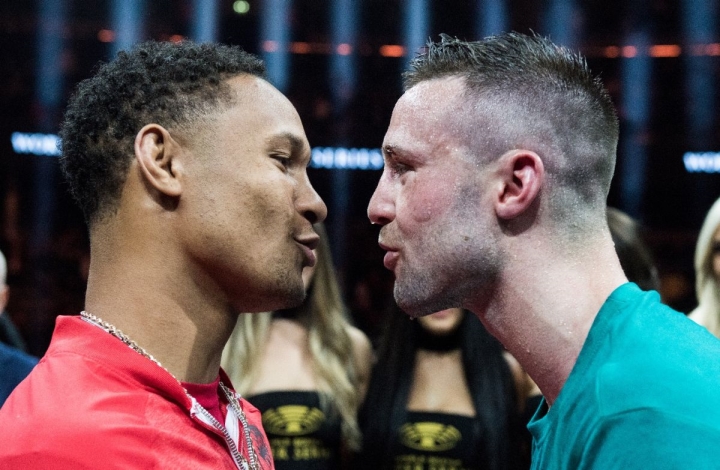 But Prograis denies his version of the events.

"Come on, Josh. It was all jokes and games, it was nothing serious," Prograis replied.

And then Taylor said: "It was just to let you know. I'm ready to go at anytime."

Their fight is headlining a Sky Sports pay-per-view card, which is also going to feature a heavyweight clash between Derek Chisora against David Price, Lawrence Okolie vs Yves Ngabu, Lee Selby vs Ricky Burns and Conor Benn vs Laszlo Toth.

For whatever reason, Taylor believes Prograis is scared of him and the upcoming contest.

The recent statements by Tayloe made Prograis lash out during the program - as he asked him - "You think I'm intimidated right now?"

And then Taylor quickly told him - "I can see right through your bravado."

But Prograis quickly replied - "You see confidence, that's what you see."

[U][B]Fight Picks[/B][/U] [B]Ring Writers[/B] [B]TOM GRAY: TAYLOR SD[/B] I picked Taylor to win the WBSS and I’m sticking to it as we enter the final. The Scotsman has wonderful skills, juxtaposed alongside toughness, spite and punching power. There is no…

[QUOTE=EnglishOxide;20136119]Any man who lets a stranger get him in a headlock is a straight b[I]i[/I]tch, let's be real. Josh Taylor alpha'd Prograis that day.[/QUOTE] Stranger ?, Hardly & let's be real your a straight up fool and everyone on this…

[QUOTE=1hourRun;20136335]What does any of this have to do with the topic? Joshua Taylor is lucky he was not arrested for assault. The only reason the 'Tart-Tomato' is not in jail is because Regi wants that IBF strap, and hes getting…

[QUOTE=buddyr;20138017]can someone explain to me what a WBC Diamond belt is other than an excuse to collect some sanctioning fees? How does Ramirez play into this? I honestly don't know...[/QUOTE] He is going to use it to force Ramirez to…

can someone explain to me what a WBC Diamond belt is other than an excuse to collect some sanctioning fees? How does Ramirez play into this? I honestly don't know...