Regis Prograis: I Do Everything Better Than Josh Taylor

WBA super lightweight champion Regis Prograis’ confidence is peaking at rocket-high levels as he inches closer to stepping into the ring against IBF titleholder Josh Taylor in a unification fight.

“I do everything better than him in the ring. It’s not just one thing,” Prograis told BoxingScene.com. “I never have a set game plan going into a fight. I always fight off how I feel in the first round. All I have to do is know that I’m prepared and in shape and my sparring was great. Once fight night comes, I can do anything in the ring, and that’s usually what I do.”

The 30-year-old Prograis (24-0, 20 KOs) also provided a brief scouting report on Taylor (15-0, 12 KOs) before the pair of southpaws square off Saturday at London’s O2 Arena in a fight that will be streamed on DAZN.

“He’s long. He knows how to use his reach, for sure. He definitely has some power,” explaned Prograis. “He has a real good right hand, and right jab. A left hand, too. He sits on his shots. He moves his body real good, too. He does a lot of good things right.” 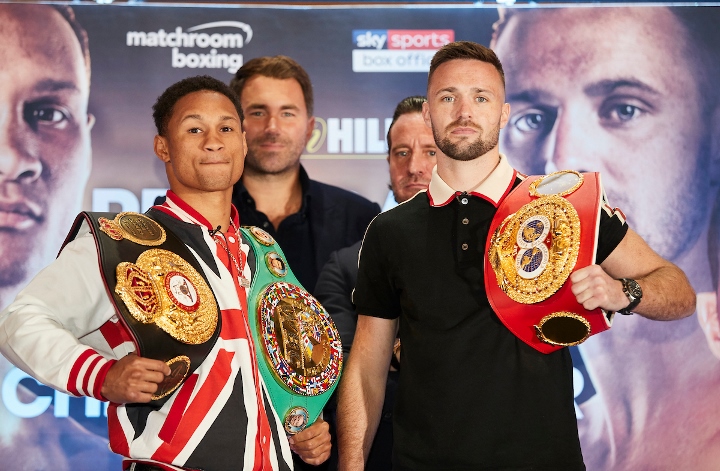 Taylor, a 2012 Olympian, ran through Ryan Martin and Ivan Baranchyk on his side of the bracket in the World Boxing Super Series in Glasgow, while Prograis plowed through Terry Flanagan and Kiryl Relikh in Louisiana. The two are now meeting in the WBSS finals and fighting to receive honors for the Ali Trophy and the vacant 140-pound Ring Magazine title.

“It’s truly the best versus best — Prograis-Taylor is the caviar of boxing,” said Kalle Sauerland, chief boxing officer of the WBSS. “They are both punchers and huge personalities but there are differences. Josh is a fighter who likes to stand up and fight and go for someone whereas Prograis so far in the tournament has picked his shots from the outside jumping in and out and he’s very slick at doing that.

“It’s a 50-50 fight between the number one and two in the division. It’s one of those fights that’s got ‘Fight of the Year’ written all over it. It’s gonna be fireworks that’s for sure. But who and how he’s gonna win is impossible to say, it is that close.”

This will be Prograis’ first fight outside of the United States, and he will be walking into the ring with the tale of the tape in favor or Taylor, who is two years younger at 28 and sports a two-inch height advantage and 2 ½ inch reach advantage.

“I don’t want to say he’s one dimensional, but I have so many more gears. Every one of his 15 fights, he’s looked exactly the same. He doesn't change anything. He’s been hurt. He’s been dropped and put down before. He was dropped against Baranchyk, but they didn’t call it. But he was hurt. He was hurt against [Viktor] Postal, too.

“He’s a world champion and considered one of the best in the world. I won’t take that away from him. He’s just not on my level.”

Prograis about to dog walk Taylor.

[QUOTE=JakeTheBoxer;20138345]This Prograis guy better stay at 140. he is too small for 147 for sure.[/QUOTE] I respect what you are saying but I disagree. Prograis will be a problem for any of those at 147 :boxing:

[QUOTE=champion4ever;20139814]I agree with Regis. Taylor has a tendency of being a bit more static, slower and robotic. Where as Prograis tends to be quicker, more fluid and loose. I can see Taylor catching a real asswhooping in this fight. Josh…

I agree with Regis. Taylor has a tendency of being a bit more static, slower and robotic. Where as Prograis tends to be quicker, more fluid and loose. I can see Taylor catching a real asswhooping in this fight. Josh…