SAN ANTONIO – This fight week has been stressful for Regis Prograis for more than the regular reasons.

The former WBA super lightweight champion’s wife is due with their third child Friday, the day before Prograis is scheduled to face Juan Heraldez at Alamodome. Unless Raquel Prograis’ pregnancy extends until Sunday, Regis Prograis will miss the birth of his second daughter.

“It’s been like a roller coaster,” Prograis told BoxingScene.com following a press conference Wednesday. “The main thing, of course, was just to train. My wife is real good. She handles the household and stuff like that. The main thing is just to train and be focused. This is my job, my passion and what I love to do. So, I’m gonna do this and then go tend to that. But October has been a very, very busy month for me. I can’t wait until October is over. It’ll be like a huge weight lifted off my shoulders once October’s done.” 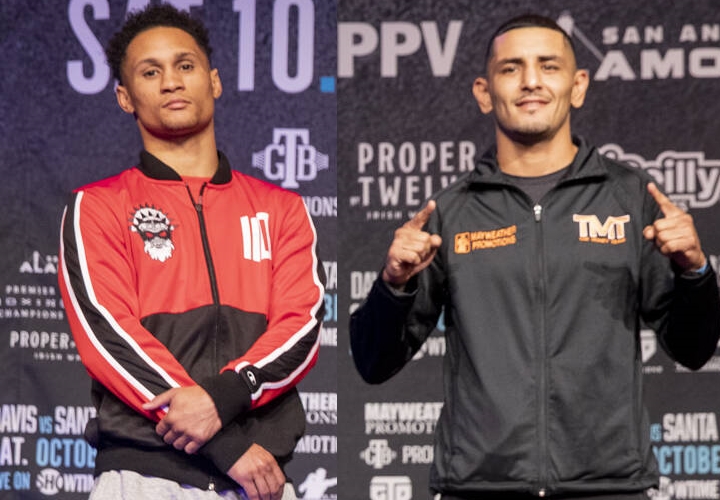 Their father was in the hospital room when Ray and Khalessi were born. The New Orleans native thought he would be there for his second daughter’s birth, but his schedule became more complicated when the Gervonta Davis-Leo Santa Cruz card was moved from October 24 to October 31.

“I’m out here and I just can’t wait for all this sh-t to be over,” Prograis said. “I can’t wait to get home because I’ll have a brand-new baby waiting for me when I get back.”

If Raquel hasn’t given birth by Saturday night, Prograis probably will drive home right after his fight. He resides in Katy, Texas, a Houston suburb that is about a 2½-hour drive from San Antonio.

“It’s close,” Prograis said. “I ain’t gotta wait for no planes, none of that. So, as soon as I’m done, as soon as the show is done, I can get out of here and tend to what I’ve gotta do. It depends what’s going on. If she had the baby already and everything is fine, I might just chill out until Sunday.

Prograis has some peace of mind because family members are helping his wife as her due date approaches.

“I think it’ll be all right,” Prograis said. “My wife is strong and she has a good support system. It’s mainly for her. It’s not really for the baby because, of course, the baby will never remember that. The main thing is for her and she has a good support system, people that’ll be helping her out and all that type of stuff. So, I have a lot confidence that she’ll be fine.

“And this is the first time we’ll have a midwife, so she’s having the baby at the house. It’s something that she kind of always wanted to do. But she has a good support system and I think everything will be fine. It’ll just be a date that we can’t forget. We won’t be able to forget that. I’ll be able to say to my daughter, ‘I fought on the day you was born.’ ”

Bro take care of business Sat night and you take care of your daughter the rest of your life. Give Heraldez that work get your groove back and take over 140