With an exciting closer, Ramon "Inocente" Alvarez won a ten round unanimous decision over Jorge "Maromerito" Paez Jr. in stellar fight before more than 5 thousand people who packed the Gimnasio de Usos Múltiples of Rafael Park in Guadalajara and Azteca 7 televised the action.

More than a thousand people stayed outside, wanting to witness the great boxing presented by Zanfer Promotions. 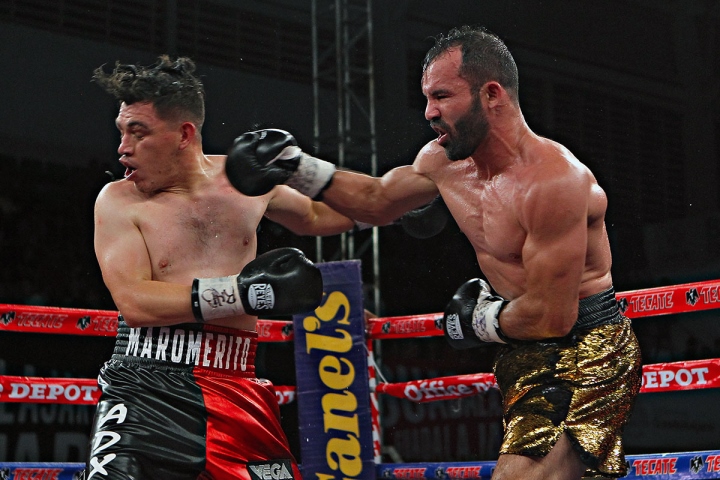 Alvarez (26-3, 16 KOs) took the initiative from the very first round by attacking with both hands on a passive ¨Maromerito¨Paez (41-11-2, 24 KOs), who wasn't doing much until the fourth round. He began to respond and it become a competitive fight.

Alvarez, with a better physique and conditioning, never stopped throwing punches against Paez Jr, who waited until the final rounds to answer.

In the tenth, Ramón came out determined to knock Jorge out and almost achieved it at the start of the round, when he started connecting with powerful uppercuts and right hands on Paez, who survived as the audience stood on their feet to watch the fight.

In a great fight, Jose "Gallito" Quirino did not leave any doubts and won by technical knockout at the beginning of the tenth round over former world champion Hernan "Tyson" Marquez in the co-main event agreed upon for the 116 pounds over ten rounds.

It was an exciting fight in which the first half was very close with many exchanges of punches, but the speed and boxing of Quirino (19-2-2, 9 KOs) were imposed on a brave Marquez (44-9-2, 30 KOs) - who tried to win, but the youth and better boxing of Quirino was better.

The eighth and ninth rounds Quirino had the luxury of connecting combinations of up to six consecutive shots to the face of the Marquez, 29 years old, and the corner decided to stop the fight at the start of the last round.