Quinton Randall: If Boxing Didn't Exist Today, 100% Sure I'd Be Dead

By now, the story of how junior middleweight prospect Quinton Randall turned his life around through boxing has made the rounds in recent months, and it’s clear that after putting his past in the rearview mirror, he’s on his way to a positive future between the ropes, beginning with his bout against unbeaten Jan Carlos Rivera on the Vasiliy Lomachenko-Teofimo Lopez undercard this Saturday in Las Vegas.

But what if boxing didn’t come into his life? What if there was no boxing? Where would the Houston native be right now?

That’s heavy stuff, so heavy there’s a long pause in our conversation after he says it because there really is no response. Randall breaks the silence, explaining that while boxing was what allowed him to move on from a life going down the wrong path, the sport also intervened when he suffered losses few would be able to take.

“My son passed away in a car accident,” said Randall of eight-year-old Quenell. Before Quenell’s death in 2017, Randall also lost a daughter at birth in 2014, and the twin tragedies were almost too much for the Texan to bear.

“Boxing was the only thing that kept me from losing my mind,” he said. “My son was my motivation for everything. He was eight years old and he passed the year I won my National title. I was at the Nationals in Kansas City and 30 days later, he passed in a car accident. His mom survived, he didn't. He was my motivation for everything, my fuel for everything. My son was the reason why I changed my life. If it wasn't for boxing, and I lost him, I don't know. I'm a hundred percent sure I wouldn't be here right now. I would have tapped out a long time ago because I had nothing that I loved more in this world than my son and boxing. So if I didn't have either one of them, I don't know what I'd be doing. I have no idea.” 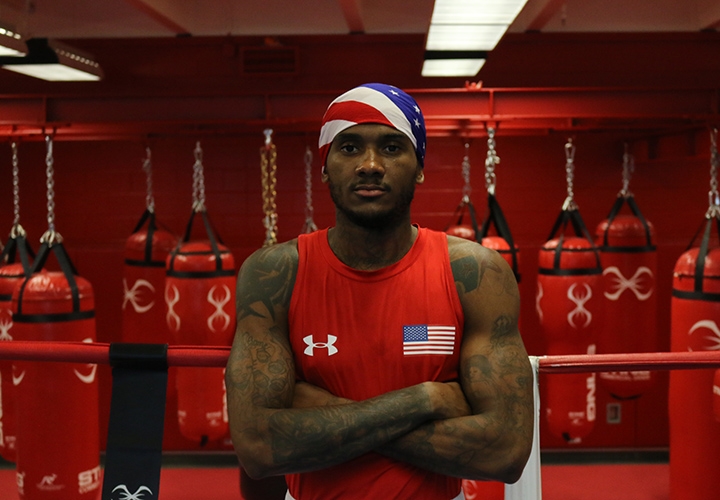 The wounds are still raw and that’s understandable. They may never fully heal, but just like fighters battle on through cuts, bruises, broken bones and exhaustion, Randall found his way out of the darkness through the act that carried him out of prison.

“After I lost my son, I went to the Olympic Training Center,” he recalls. “It was my first year on the team (Team USA), so after I buried him, I just wanted to get away. I wanted to get away from Houston, from all the stress. People were treating me differently because they were trying to help, and they didn't know how to be around me. I wanted to get away to people who didn't know me, so I shot out to Colorado and started my international career and that helped me a lot because they didn't hover over me. They all expressed their condolences and let me be, and as time went on, I began to heal.”

He also turned into a fighter no one saw coming. Randall became the captain of the National team, competed internationally, and made it to the 2016 Olympic trials, ending his amateur career with a 73-12 record. In 2019, he turned pro, but with little fanfare as he ran his record to 6-0, beating the likes of 2020 sensation Clay Collard along the way. There was no hype train, no huge social media following, no promoters and managers lining up to sign him.

Enter Peter Kahn, one of the sport’s most respected managers and one who had been around the sport for a quarter of a century. The Floridian was asked by some folks he knew at USA Boxing if he would take a chance on Randall. He agreed.

“A lot of people would have said, 'Well, he's 29 years old, he's 6-0, he's really starting out late,'” said Kahn. “Because he had such a meaningful amateur background and because he's so well-liked, because he has experience being in camp with big names, I didn't look at it as a challenge; I said we're basically going to follow the Antonio Tarver path. He (Tarver) didn't even turn pro until 28 and didn't win a world title until he was 35. In fact, at 31 he lost his first world title eliminator to Eric Harding. Then he came back and won and won the world title at 35.”

Sounds like a good plan, but there was the question of Randall’s past. Kahn had been around the business long enough to know that the best plans are often derailed when there are human beings involved. In one of his first conversations with Randall, he put everything out on the table.

Randall told him the past was the past. Kahn believed him, and after spending time with the now 30-year-old in Florida, he’s convinced that his fighter will be a role model, not a cautionary tale.

“He won't ever get in trouble again,” Kahn said. “Whatever that was at whatever time in his life that was, that's not who he is now. It's just not.”

What Randall is right now is a fighter, one who knows that he has to move faster than most 6-0 prospects but is willing to do whatever it takes to get a championship belt around his waist.

“That's why I'm taking a fight like this,” said Randall. “And I'm taking fights like this just so I can push my resume and get the recognition that I need. I fought guys like Clay Collard already and I fought a couple other undefeated fighters, so he (Rivera) won't be the last one that I do fight because I'm taking a lot of people's 0s in the coming fights.”

“We understand that we're not going to be in the normal development mode,” adds Kahn. “We're gonna fast track it and we're gonna take chances to eat some chunks of space up when we can and move at a quicker pace, and this is the first step. We're not in a position to do anything but win and we know that. Winning is the only option and moving at a quicker pace is basically what's going to allow us to make up for some lost time.”

Lost time. It’s something Randall knows all too much about. Thankfully, he’s moved on, but in the process he still remembers the losses of the past. He always will, even if he’d like to forget, simply because it’s a part of his life he will be reminded of constantly. That’s a burden no one needs to bear, but he’s accepted that telling his story may help someone down the line.

“It doesn't bother me as much as it did,” Randall said. “I like telling people my story just to show them strength and the type of strong person I am and give them hope that no matter what, if they've been through something that's not as dramatic or as dramatic, that if I can do it, facing all the obstacles I've been through in my life, then you can do it. At one point I was in prison, I stayed in jail, I was homeless, I did lose a son, I lost a daughter at birth…”

His voice trails away for a second, then he returns to assure me, and maybe himself, that it’s okay.

“I'm not unhappy with my life right now,” he said. “It can be better, it's going to be better after this fight and future fights, and I'm still going.”

He’s earned that peace, where the only adversity to be faced is inside a ring. Randall agrees.

[QUOTE=Jc8804;20815998]This is completely pathetic. Basically saying without boxing he is a criminal or bad for society ....[/QUOTE] Not pathetic, just the harsh reality of growing up black in the hood. George foreman said the same thing when got out of…

[QUOTE=Jc8804;20815998]This is completely pathetic. Basically saying without boxing he is a criminal or bad for society ....[/QUOTE] Bit effing harsh, man. Your life never spun outta control? You never f[I]u[/I]cked up as a kid or a young man? Personally I…

This is completely pathetic. Basically saying without boxing he is a criminal or bad for society ....