That’s one way to make an entrance.

Jesus Ramos made the most of his televised debut, flattening Rickey Edwards with a one-punch 3rd round knockout Saturday evening at Rabobank Arena in Bakersfield, Calif.

A left hand shot put Edwards down and out, forcing an immediate stoppage at 2:40 of round three in what will serve as a Knockout of the Year contender come award season.

There was concern going in that it was too ambitious of a leap in opposition for Ramos, a baby-faced 18-year old prospect from Casa Grande, Az. The FS1-televised bout—which kicked off a live quadrupleheader which followed a four-fight telecast on FS2—was just his third in the United States, having spent most of his career in Mexico prior to meeting the necessary age requirements to fight in the states. 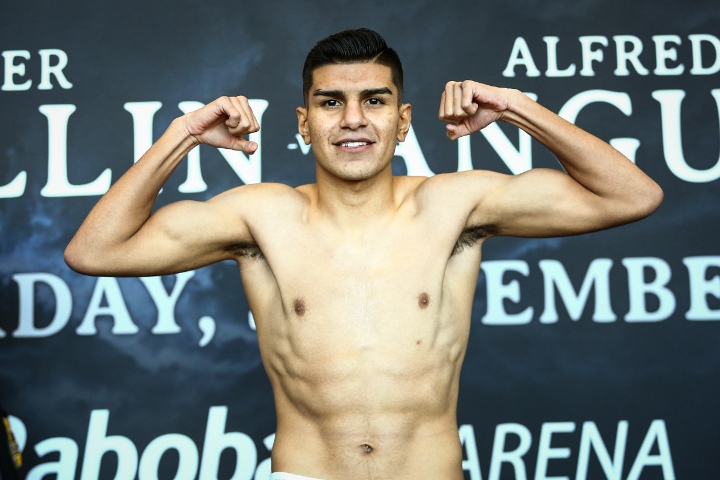 While it’s clear that Edwards (12-4, 3KOs) is no longer the regarded prospect he once was, the New Jersey native had also never been dominated at any point in his pro career to date. The 29-year old did his best to hang tough with the power-punching southpaw, rolling with the punches in his best effort to keep his younger foe honest.

Unfortunately, the inevitable couldn’t be denied.

Perhaps even more impressive than the stoppage itself was the fact that everyone seemed to know it was coming—including the knockout victim himself. Edwards was trapped along the ropes but did his best to brace for a left hand he knew was coming in his direction. His glove remained just high enough to partially block the shot but enough of it still landing to send him face-first to the canvas.

Referee Jack Reiss didn’t see a need to issue a count, immediately waving off the contest.

Ramos rolls to 11-0 (10KOs). The lone distance fight of his career came in his last ring appearance, pitching a four-round shutout on the non-televised undercard of a PBC on Fox telecast in Las Vegas.

The unbeaten lightweight from Dominican Republic continues to be a prospect to watch, delivering a spectacular performance in battering Jose Luis Gallegos into submission after five one-sided rounds Saturday evening at Rabobank Arena in Bakersfield, Calif.

Accumulated punishment coupled with a hematoma developing over Gallegos’ left eye forced the stoppage prior to the start of round six.

Rivera was fierce from the start, throwing 91 punches in the opening bell and gunning for a knockout versus the iron-chinned Gallegos, a locally based journeyman who’d extended rising contender Jhack Tepora the full 10 rounds just three months ago.

Action never slowed, although Gallegos had his moments in round two, absorbing hellacious punishment but finding the strength to briefly stun Rivera with a body shot late in the frame. It came after Rivera already scored with a hailstorm of left hooks, right hands and body shots of his own, as was the case in a lopsided round three.

Time was called at the start of round four, as referee Marcos Rosales expressed concern over a hematoma forming over Gallegos’ left eye. Rivera didn’t make things any more pleasant, continuing his two-fisted assault on his stubborn foe.

Whereas Gallegos (16-8, 12KOs) remained determined to go out on his shield, the referee decided to spare his corner the decision to have to stop the fight. Rosales let Gallegos know directly of his concern over the amount of head shots he was absorbing in waving off the contest.

The official time was 3:00 of round five.

Rivera moves to 17-0 (11KOs) with the win, his second straight in the states. The 21-year young prospect is trained by Herman Caicedo—who also guides the careers of heavyweight contender Luis Ortiz and former bantamweight titlist Juan Carlos Payano—and managed by the world renowned Sampson Lewkowicz.

With time to kill on the FS2 telecast, Francisco Ochoa made his way to live television. The unbeaten super featherweight from Los Angeles was met with a stiff challenge, fending off a scrappy Clay Burns to take a six-round unanimous decision.

Scores weren’t announced live on air but the final call seemed like the right one. Several rounds were close but not the point of Burns (8-6-2, 4KOs)—who hails from Fort Worth, Texas by way of Alexandria, La.—pulling off the upset. Ochoa was credited with a knockdown in round three, though replays showed that his left hand pulled down the head of Burns. It wasn’t enough to discourage his determined foe, although Ochoa surged ahead down the stretch to move to 17-0 (9KOs).

The 2016 Russian Olympian had been extended through his first three bouts as a pro but found his power surge in a big way against Texas’ Fuentes (9-9-1, 2KOs), dropping the southpaw four times, including three in the decisive fourth round. To his credit, Fuentes kept rising to his feet every time but his body language was of concern to referee Rudy Barragan who stopped the contest at of round four.

Khamukov (4-0, 1KO)—among the many rising talents under the guise of manager Alex Vaysfeld—has gone six rounds twice and four rounds in his prior three bouts as a pro, all of which went to the scorecards. The 28-year old picks up his quickest win to date, only by 39 seconds.

Earlier in the FS2 preliminary telecast, Anaheim, Calif. knockout artist Jonathan Esquivel (12-0, 11KOs) made it four straight inside the distance following a two-round blitzing of Pittsburgh (Pa.) journeyman Justin Steave (10-3, 4KOs) in their middleweight heat. Esquivel scored three knockdowns in forcing the stoppage at 1:21 of round two.

In a bout that made the highlight reel, Gary Antuanne Russell (11-0, 11KOs) maintained his perfect knockout-to-win ratio with a 1st round stoppage of Mexico's Luis Ronaldo Castillo (20-5, 15KOs). A body shot did the trick just 0:32 into the contest in providing the latest win for Russell, a 2016 U.S, Olympian whose older brother Gary Russell Jr. is a reigning featherweight titlist who made headlines for all the wrong reasons this weekend. Gary Jr. posted a now-viral video taunting three-divisions titlist Leo Santa Cruz, whom he has targeted for a title fight showdown and with the latest measure including threatening (jokingly or otherwise) Santa Cruz's father and trainer, Jose who continues to battle cancer.

[QUOTE=Oldskoolg;20073844]Haha I see he was responding to me. I don’t know who that is but his account is blocked so now I can see it. Anyway, yes, PBC bashing is a popular occurrence on boxingscene comments lol. Enjoy the fights…

[QUOTE=Realizniguhnit;20073793]Kinda seems like your just hating on PBC a bit. Although I tend to agree on the inactive portion of your statement, half those boxer's you mentioned are pretty average imo. I'm really not even that sold on Ortiz, dude…

[QUOTE=Realizniguhnit;20074112]Tom Brown ain't matchmaking chit. FOH lol[/QUOTE] He's the promoter of the event and he's listed as the matchmaker. TGB did the matchmaking for the entire event except for maybe the main event and one other fight. Most of the…

[QUOTE=Bob Haymon;20074064]How am I hating on Haymon by pointing out that these prospects were discovered by someone else? You're one of these PBC shilling snowflakes looking for a reason to get offended. I didn't mention anything about their opposition. Even…

[QUOTE=Oldskoolg;20073919]Did you notice how much they mentioned Callum Smith and showed his likeness in that super middleweight montage? Looks like haymon is making a push to sign the scouser[/QUOTE] Na I missed that but it wouldn't surprise me. Haymon not…