Oleksandr Usyk’s big victory over Murat Gassiev may have seemed pretty one-sided but was far from an easy win for the Ukrainian pugilist. General Director of K2 Promotions Ukraine, Alexander A. Krassyuk believes it took all the skills, talent, and constant focus of his protégé to secure the big win, one that netted Usyk the undisputed world champion status at cruiserweight.

The 2012 London Olympic gold medalist brought his WBC and WBO titles in a fight with fellow unbeaten and WBA/IBF unified ruler Gassiev (26-1, 19 KOs) at the final event of the cruiserweight version of the celebrated World Boxing Super Series tournament in Moscow on July 21.

According to Krassyuk, only one mistake by Usyk (15-0, 11 KOs) could very well have lead to disaster against his knockout puncher Russian opponent.

“Well, the fight did look one-sided, but it was not in reality. A tenth of a second determined the course of the match. If Usyk had stayed in front of Gassiev for one more moment after his attacks the fight could easily have gone in the different direction,” told the Ukrainian businessman to BoxingScene.com. 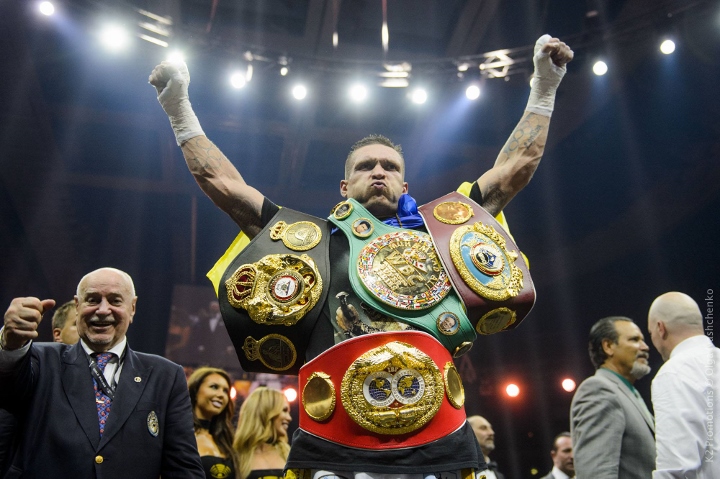 For a fighter to be able to effectively use his power against his opponent, he has to find his own distance, one that serves him well to come out with his offense. Krassyuk thinks part of his boxer’s success came from a tactical element that Usyk used brilliantly during the fight en route to his 120-108, 119-109, 119-109 victory against his Abel Sanchez-trained foe.

“Gassiev is a recognized puncher, but to land your shot you must start from a comfortable position. Usyk ended his maneuvers with a step to block Gassiev’s footwork thus not giving him a chance to load his ‘cannon’.”

Despite some in the media questioned Usyk’s preparation leading up to the biggest fight of his professional career based on the release of his trainer, Sergey Vatamanyuk, the Ukrainian had a masterpiece performance.

On the fight, the coach in Oleksandr’s team was Canadian Russ Anber, a well-respected cornerman in the game. However, according to Krassyuk, there was another boxing brain in the picture who helped the Ukrainian fighter get ready for his wonderful moves in battle.

“That [formerly mentioned movement] was Usyk’s assignment for the fight given by the outstanding boxing “professor”, Anatoly Lomachenko. So, our confidence took its beginning at the training camp and continued until the end of the 12th round.”

The father and trainer of Vasyl Lomachenko is no stranger in coaching Usyk, as he both handled preparations for the cruiserweight star in the Ukrainian national team as an amateur, as well as taking part of his camps for some of his professional fights.

With all four of the major sanctioning body belts around his waist alongside the prestigious The Ring title, Usyk is now in serious talks of a cruiserweight defense against British star and former David Haye conqueror Tony Bellew, with the possibility of a future super-fight already on the horizon against fellow unbeaten and unified heavyweight belt holder Anthony Joshua.

[QUOTE=Boksfan;19010750]Yes they both will move up soon, as for Usyk, he's vastly superior to Bellew in every boxing aspect. As for 90k attendance, it's not a casino so you won't charge that much for a ticket. Besides US fans are…

[QUOTE=Boksfan;19010676]It's cool, we all learning here.[/QUOTE]I'm always confused about who is a draw and who isn't, when it comes to overseas fighters. I'm still amazed that Joshua is not a $100 million dollar draw, when 90,000 people attend a fight!…