Prograis: This Is A Chance Most Fighters Don't Get In A Lifetime

It didn’t take long, however, to put the unbeaten super lightweight on the defensive, having little at all to do with his upcoming opponent.

A preceding rant by heavyweight Dereck Chisora dissatisfied over his place as the evening’s chief support for his clash with former titlist Joseph Parker added an unexpected twist to Monday’s press conference to formally announce the full bill. The show takes place Oct. 26 at London’s O2 Arena, marking just the second career fight in England for Taylor (15-0, 12KOs) and the first trip abroad for New Orleans (La.)-bred Prograis, whose two main goals remain to emerge victorious and to establish a new fan base.

“I’m glad to come here, I’m glad to be here. Dude (Chisora) kind of got in my head because he wanna be in the main event,” admitted Prograis (24-0, 20KOs) who engaged in a brief verbal spat with the bitter heavyweight before just allowing the sequence to play out. “But, I’m excited. This has heen a dream to come to London, some of the best fans in the world. There’s no animosity towards anyone. It’s just a chance that most fighters don’t get in a lifetime. 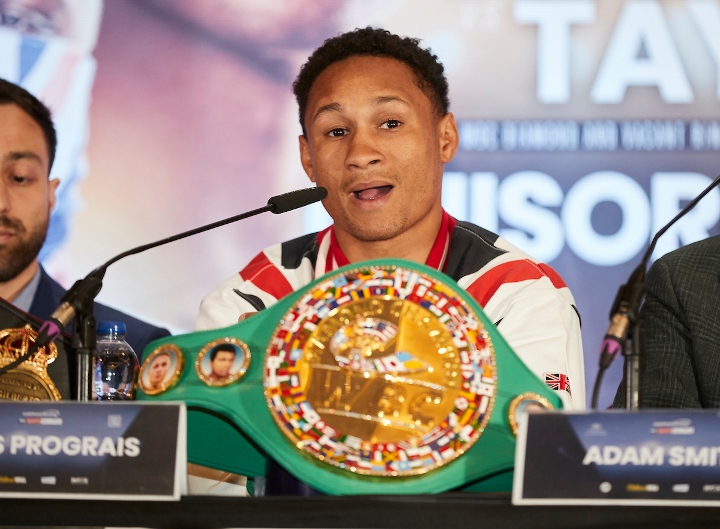 Prograis entered the tournament as the number-one seed, validating that status with one-sided wins over former lightweight titlist Terry Flanagan and exiting beltholder Kiryl Relikh. The latter win came this past April, with Prograis dismantling Relikh in six rounds to claim his first major title.

The win came three weeks prior to Taylor—a member of the 2012 Great Britain Olympic boxing team—outpointing previously unbeaten Ivan Baranchyk to win the IBF title this past May in Glasgow, Scotland.

Both remain confident of prevailing in the finals and claiming the tournament’s Ali Trophy, named after the late, great former three-time heavyweight champion Muhammad Ali.

When asked for a prediction on whether he’d deliver a knockout, Prograis—often referred to by renowned publicist Bernie Bahrmasel as ‘The Modern Day (Roberto) Duran’—made it clear he’s here to emulate rather than imitate the sport’s all-time greats.

“I know we fighting for the Ali Trophy but I’m not Muhammad Ali,” noted Prograis, content with his simple belief of emerging victorious. “I can’t say what round or anything like that. I’ll just go out there, do my thing and have fun. That’s what we gonna do.

“As far as I’m gonna hurt him, stop him, we just gonna see. So far I’ve dominated everyone I’ve faced.”

The bout headlines a loaded card (assuming Chisora-Parker remains intact), which will air live on Sky Sports Box Office in the U.K. and stream live on DAZN in the United States.

Can’t wait for this fight! Funna be lit!!

Now this, is what I call a matchup!

[QUOTE=factsarenice;20047458]No opinions necessary, this fight will prove supremacy. This IS what Boxing is supposed to be...the best vs the best.[/QUOTE] Yep. 100%. And doesn't it seem the lighter the weight of the division, the more likely you are to get…

No opinions necessary, this fight will prove supremacy. This IS what Boxing is supposed to be...the best vs the best.