Prograis: Relikh is Definitely The Biggest Fight of My Career

Regis Prograis (23-0, 19 KOs) and Kriyl Relikh (23-2, 19 KOs) face off for Relikh's WBA junior welterweight title on April 27 at the Cajundome in Lafayette, LA. The bout, the first semifinal of the WBSS 140-pound tournament, will be broadcast on DAZN.

Whether he intended it or not, Prograis' last fight, a lopsided decision against Terry Flannagan, marks a milestone in his career.

Growing up, Prograis (23-0. 19 KOs) idolized the likes of Mike Tyson and Roberto Duran. Naturally, he gravitated toward a seek-and-destroy modus operandi that "Iron Mike" and "Hands of Stone" had utilized to savagely against their opponents. For the first 22 fights of his pro career, Prograis tenaciously tore into his opponents, often absorbing as many punches as he delivered, relying on his superior punching power and punch resistance to win wars of attrition. 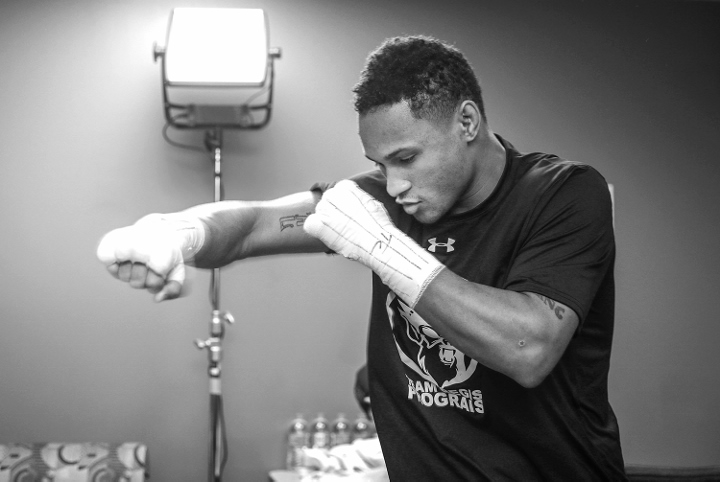 But against Flajnnagan, the southpaw morphed from Marvin Hagler to Hector Camacho. Utilizing slick upper-body movement, hand speed, feints and mind games, Prograis consistently beat Flannagan to the punch and barely got hit as he cruised to a lopsided unanimous decision in his hometown of New Orleans.

Which Prograis - bull or matador - will show up at the Cajundome?

It might sound like Prograis is being evasive, not wanting to reveal too much about his game plan in the fight, but he insists he genuinely has no clue as to the mode of combat he will deploy against Relikh. After all, nobody - not even himself nor his team - knew he was going to transform from slugger to slickster against Flannagan until he did it. It was just something he improvised on the spot, much like how Ali pulled the rope-a-dope from under his sleeve against Foreman.

"I just know I can change my style up any time I feel like," Prograis said. "I'm very versatile and I can do different things in the ring. In training (for Flannagan) I was actually coming forward the whole time. Then when I got in the fight I just felt like boxing because I read things online and people said I don't have defense and I can't go 12 rounds. In that fight I proved that I can go 12 rounds and don't have to get hit. He probably landed four punches on me in the whole fight. I probably could have gone 15 to 20 rounds because I was so relaxed in that ring. In every fight I want to have that same relaxed feeling that I had against Flannagan. If I do that feel that nobody can beat me."

Over the last 18 months, Prograis encountered a number of bumps on the road, having won two so-called title eliminator bouts only to be denied a world title shot thereafter. As recently as two months ago, his showdown against Relikh appeared to be on shaky ground and the entire tournament was in danger of coming apart at the seems with Ivan Baranchyk pulling out of the other semifinal because of financial issues with the WBSS. But all parties resolved their differences, Baranchyk came back on board and the tournament was salvaged.

"With the whole World Boxing Super Series, I wanted to stay in it simply because it is for the world title," Prograis said. "As far as getting my motivation up, I'm always in the gym training whether I've got a fight coming up or not. With the World Boxing Super Series, it was in jeopardy but I told my manager, 'look, I really want to give them a chance, I really want to fight for the title, so just try to make it happen as much as possible.' That's what happened and I'm glad it worked out that way."

Although he fought his last two bouts in his hometown of New Orleans, Prograis-Relikh will be fought in Lafayette, almost smack in between Houston and New Orleans. Prograis was uprooted from New Orleans to Houston by Hurricane Katrina in 2005.

"Lafayette is a fight town," Prograis said. "They've got a lot of good boxing gyms out there. It is right in the middle of Houston and New Orleans - where I live at and where I'm from."

Prograis cedes the strategizing and battle planning to his trainers Bobby Benton and Aaron Navarro. Any game plan, though, might be rendered moot should he decide to venture off script like he did in his last fight.

"I don't study my opponents and I've only seen him fight one time. I'm pretty sure he's strong and he probably can hit hard. Without the two losses he's got the same record that I have. That's a lot of knockouts. I'm expecting him to come in strong and in shape and try to give me hell."

In Relikh, Benton sees a well-rounded, battle-tested fighter but at the same time, one with weaknesses that he will be eager to exploit.

"He's tough as nails and he's coming to fight, but there are some holes. He leaves himself open," Benton said.

Benton brought in former national 152-pound champion Quinton Randall (1-0) who made his pro debut in February to spar with Prograis. Randall said his speed and multidimensionality should prepare Prograis for anything Relikh has to offer.

"Relikh is not faster than me and I doubt he has more power than me," Randall said. "When I spar with Regis I give him a different look every time. I'm on the inside working with him, I'm on the outside boxing with him or I'll work him mid range. Each round I mix it up the best way I could by giving him additional looks, being as awkward as I can be and use my speed and my range."

"I predict a late stoppage, between round 9 and 11," Randall added. "I don't see it going the distance. I would say he's gonna break Relikh down to the body and then he's gonna take him out with a head shot."

Thanks to his fan-friendly style, Prograis fought on national airwaves since 2015. While it has been lucrative and life-changing, he has been largely ignored, avoided and brushed aside by many of the big names in the division. A victory over Relikh, he expects, will raise his profile exponentially.

"I definitely think this is the biggest fight of my career simply because there's a title on the line," Prograis said. "Right now at 140 pounds, no one is calling me out. I don't know if they're scared or if it's because I don't have a full title yet. But it'll change once I get the title."

"I'm still hungry, I still train hard all the time," Prograis added. "The main thing is I know exactly what got me here. It's a set formula that got to me to where I'm at. I feel like I'm increasing and I want to keep getting better. The hunger doesn't go nowhere."

[QUOTE=phishfan;19688153]This aint 50/50. Relichk does have a chance to win but Prograis should win. Dont forget relichk has lost 2 fights, he also lost to ricky burns.[/QUOTE]His two losses are disputed; his last loss was a fight he was clearly…

[QUOTE=hitmanjosh;19688098]Don't get it twisted this kid has heart and can fight because anytime you fight a guy who beat you and then you turn around and beat him and he was an outstanding Cuban that's balls and determination. This is…

Don't get it twisted this kid has heart and can fight because anytime you fight a guy who beat you and then you turn around and beat him and he was an outstanding Cuban that's balls and determination. This is…