Prograis: Josh Taylor Would Knock Jose Ramirez The F*** Out!

WBA junior welterweight champion Regis Prograis was ringside on Saturday night at the College Park Center in Arlington, Texas, and he watched Jose Ramirez score a sixth round knockout of Maurice Hooker to unify the WBC, WBO world titles at 140-pounds.

Prograis has a unification of his own, when he collides with IBF world champion Josh Taylor in the final bout of the World Boxing Super Series (WBSS). Their fight is targeted for a date in October.

Prograis, who also holds the WBC's Diamond title, is technically the mandatory challenger for Ramirez - but he was never able to get the Mexican boxer in the ring. 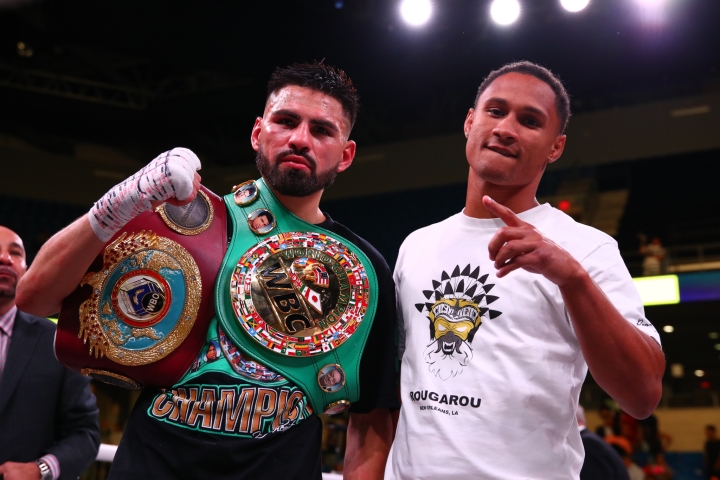 Prograis feels confident that his next opponent is a tougher outing than Ramirez.

He admits Taylor is going to be a very tough fight, but he doesn't view Ramirez in the same light.

“Josh Taylor would knock Ramirez the f*** out -  I guarantee! Josh Taylor would smoke him. It was a great fight. It was an entertaining fight. They beat the sh*t out of each other just like I said - who beat the sh*t out of me? I’ve had 24 fights with 20 knockouts and I haven’t had a hard fight yet. Who even got close? Nobody even got close. I got Josh coming up," Prograis told IFL TV.

“I’m not even worried about Ramirez. He’s got his belt. I’m happy for him. I’m going to deal with the Josh Taylor fight, and then I’m going to come back and f*** over Ramirez. The only person that went twelve rounds with me is Terry Flanagan. Look what I did to him, I smoked him bad. I f***ed up my hand. No excuses, but I did f*** up my hand. That’s why I couldn’t land my left hand.

“One day I will prove I’m pound-for-pound. I’ve never been close to being tested yet. Josh Taylor will probably be my biggest test yet. But so far I’m undefeated fighting former world champions, and world champions. I beat them. I be smoking all of them.”

As far as last week's fight, he saw a big mistake that Hooker made.

“You can’t stay on the ropes against Ramirez. I know that - and I know he’s got power and he throws the Mexican double left hook. I respect him, but at the same time I feel like I’m going to smoke him," Prograis said.

[QUOTE=Tha Kid;19972664]You would get your ass thoroughly whipped lol. We box over and street fight. We want all the smoke. Now if you ever in DC hit me up. We can spar and I dont care how big you are...I'm…

[QUOTE=jonnyc420;19967144]I box quite well, wrestling and kickboxing are my sport and believe me a punch from a little man like that isn't gonna stop me from getting a hold of them and slamming their head on the concrete or the…

[QUOTE=Tha Kid;19962717]I'm not assuming anything but it's clear you dont BOX from this conversation. I do...so I can recognize a casual when I hear one 🤷🏾*♂️[/QUOTE] I box quite well, wrestling and kickboxing are my sport and believe me a…