Nikolai Potapov isn’t going down without another fight.

Potapov’s promoter, Dmitriy Salita, told BoxingScene.com on Monday that he has filed an official protest of Potapov’s majority-decision defeat to Joshua Greer Jr. with New Jersey’s State Athletic Control Board. Greer recorded a controversial victory over Potapov on Saturday night at Prudential Center in Newark. 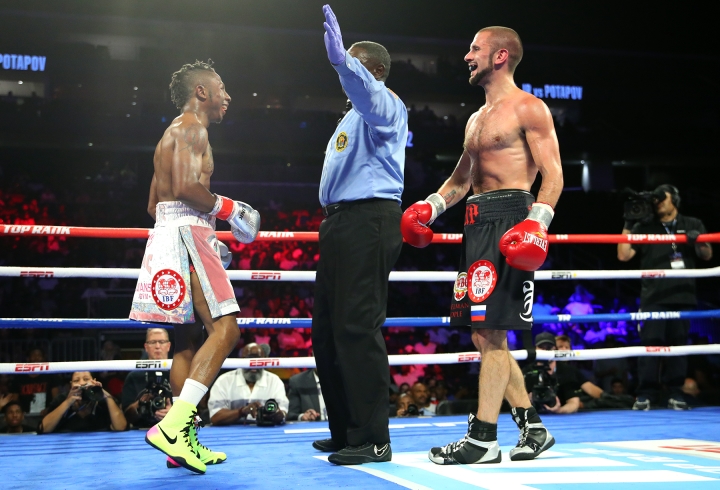 Analysts Andre Ward and Timothy Bradley, who called the 12-round bantamweight bout for ESPN, were convinced that the 28-year-old Potapov earned the win and adamantly disputed the scoring. It’s extremely unusual, however, for a commission to overturn a questionable result, even those much more controversial than Greer-Potapov.

“We feel we got robbed, as do boxing fans,” Salita said following the fight. “ESPN and the media had Nikolai winning. We are going to appeal the decision. ESPN is a great platform for the sport of boxing. We are grateful for the opportunity and what is just. Nikolai won the fight!”

Potapov also protested his loss during his post-fight interview with ESPN.

The 25-year-old Greer is represented by Bob Arum’s Top Rank Inc., the promoter of a card that featured featherweight contender and Newark native Shakur Stevenson in the main event.

His unconvincing victory moved Greer closer to a title shot because their fight was an IBF elimination match.

Greer put me to sleep in live with one of his pillows. Today I had watched the fight completely alert and I saw Potapov's win a tight decision in his way. Bob Arum again with his cooking decision.:trink26:

Greer lost. He can keep his pillows.

Greer's post fight interview tells us all we need to know about him. I'm with the general consensus on this. Greer lost to Potapov

Greer clearly won. He outlanded the Russian & hurt him about 3 times.

They need to reverse this ridiculous decision immediately as well as the one where Jerry Forrest was robbed of his clear win against Jermaine Franklin. Forrest and Potapov won those fights, period!!!