The Postol-Mimoune winner will move closer toward a shot at Jose Ramirez, the WBC’s super lightweight champ. 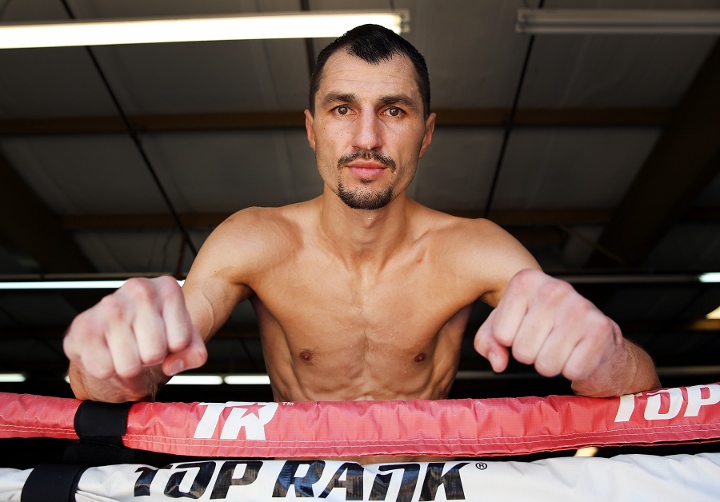 Postol-Mimoune and Easter-Barthelemy will be two of three bouts broadcast by Showtime on April 27 from The Joint at Hard Rock Hotel & Casino in Las Vegas. The third component of that tripleheader hasn’t been solidified.

Gary Russell Jr. (29-1, 17 KOs) had been under consideration for the main event of this card.

A suitable opponent could not be found for the WBC featherweight champion, though, thus his return has been further delayed. The 30-year-old Russell hasn’t fought since he out-boxed Joseph Diaz Jr. on his way to a 12-round, unanimous-decision win last May 19 in Oxon Hill, Maryland.

Easter (21-1, 14 KOs), a former IBF lightweight champion from Toledo, Ohio, will box for the first time since Mikey Garcia (39-1, 30 KOs) beat him by unanimous decision in their 12-round, 135-pound title unification fight July 28 at Staples Center in Los Angeles. The Cuban-born, Las Vegas-based Barthelemy (27-1, 14 KOs, 1 NC) knocked out a journeyman in his one fight since Belarus’ Kiryl Relikh (23-2, 19 KOs) defeated him in their rematch for the then-vacant WBA world super lightweight title a year ago at Freeman Coliseum in San Antonio.

The Easter-Barthelemy bout will be contested for the WBA’s “world” lightweight title.

Barthelemy, 32, is the WBA’s No. 2-ranked contender for its true lightweight champion, Vasiliy Lomachenko. Easter, 28, is ranked No. 3 by the WBA among its 135-pound contenders.

Lomachenko (12-1, 9 KOs) is scheduled to make a mandatory defense of the WBA’s “super” lightweight title against top-ranked challenger Anthony Crolla (34-6-3, 13 KOs) on April 12 at Staples Center. ESPN will air the Lomachenko-Crolla contest.

When did Postol link up with PBC?

Good solid card, Easter Jr vs Rances is solid and Postol almost always gives a good account of himself so a win for him puts him back in the mix in being one of the best in division!

[QUOTE=Lemonhead_Jeff;19620918]In addition to this, they are also broadcasting Shields vs Hammer on the 13th, and a Friday night Showbox card on April 5th[/QUOTE] They're doin All Acces for Shields-Hammer too. Premiers this Friday, probably when they'll announce Easter-Barthalemy. Devin Haney…

I like this fight too, casuals won't watch this but it's a good card for the hardcores, looking forward to it. I lean Postol in a competitive fight. They probably need to make the 3rd fight a lower level slugfest…

[QUOTE=killakali;19620755]no it says one event. Their monthly offering[/QUOTE] In addition to this, they are also broadcasting Shields vs Hammer on the 13th, and a Friday night Showbox card on April 5th