Porter: We'll See What Thurman Has Left In Tank With Pacquiao

Shawn Porter expects Keith Thurman to be better against Manny Pacquiao than he was when he fought Josesito Lopez.

Thurman still won’t be good enough, according to Porter, to top Pacquiao in their welterweight title fight July 20. Porter picked Pacquiao to beat Thurman in a preview video posted to premierboxingchampions.com.

“I know Keith, personally, has been waiting on this for a number of years,” Porter said. “The big question is – even Keith has said it himself – who am I in 2019? I think we’re about to find out. We got a little glimpse of it against Josesito Lopez earlier this year. But I think we’re gonna get a very good glimpse of it now. We’re gonna be able to see exactly what Keith Thurman has in the tank. We’re gonna see that against Manny Pacquiao, who, of course, everyone’s wondering what he still has in the tank, being 40-plus years old.” 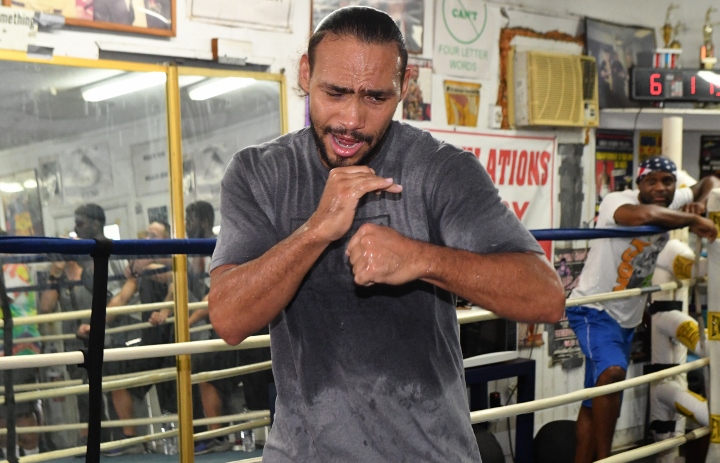 The 31-year-old Porter (30-2-1, 17 KOs) is awaiting confirmation on a date and site for his FOX Sports Pay-Per-View main event versus Spence (25-0, 21 KOs), the IBF champion. For now, Porter, who works for FOX Sports as a boxing analyst, is looking forward to watching the Philippines’ Pacquiao (61-7-2, 39 KOs) and Thurman (29-0, 22 KOs, 1 NC), of Clearwater, Florida, square off in another pay-per-view fight for Thurman’s WBA welterweight title at MGM Grand Garden Arena in Las Vegas.

Thurman is 10 years younger than the 40-year-old Pacquiao, but Porter doesn’t think youth alone will be enough for his welterweight rival to win the biggest fight of his career.

“Now me, personally, I think [Pacquiao is] still fast enough, quick enough and explosive enough to beat Keith Thurman,” Porter said. “I think that this is gonna be Keith Thurman’s power against Manny Pacquiao’s unrelenting speed, his quickness, his foot movement and, of course, his explosiveness. We’ve gotta give Keith Thurman some credit, though. The guy can think in the ring. He can get guys off balance, he can lure guys in, he can trick guys.

“So, you can definitely look to see Keith try to trick Manny and try to get Manny to get outside of his own comfort zone and what he does well in the ring, so that Keith Thurman can have his way. But I don’t think it’s gonna be Keith Thurman’s way this time. I think that Keith Thurman’s looking at his first lost against a living legend named Manny Pacquiao.”

Porter is my favorite welterweight, I am looking forward Porter -Spence. This guy always takes a challenge. Boxing would be much better with all guys being like Porter.

I bet on Thurman already. I won with a few Japanese fights, but if Thurman gets stopped, my lil wins are wiped out, and my wife is mad as pluck. She’s say some chit like, papa, my love decreased.... We…

If Porter wants a big payday, he must see to it that he beats Spence in his next fight.

[QUOTE=Roadblock;19898602]You mean safety for Manny, Errol wanted this because he knows he destroys Manny, like someone else said Mannys name is great on a young guns resume. Errol is another size above Thurman, he would monster Manny if he wanted…