Counter programming is nothing new in boxing but it’s always hardest when there are two genuinely interesting main events.

DAZN and Fox will have overlapping broadcasts on Saturday night and while start times indicate Fox could be off the air before the DAZN main event, fans should know by now not to take that for granted.

Anyone who sets a DVR for less than a 90 minute overrun for boxing these days plays with chances for disappointment.

Both main events feature legitimate top ten fighters, with an alphabet title on the line, in contests where the underdogs are far from prohibitive. If we’re going to have two shows to watch on a Saturday night, that’s plenty to look forward to 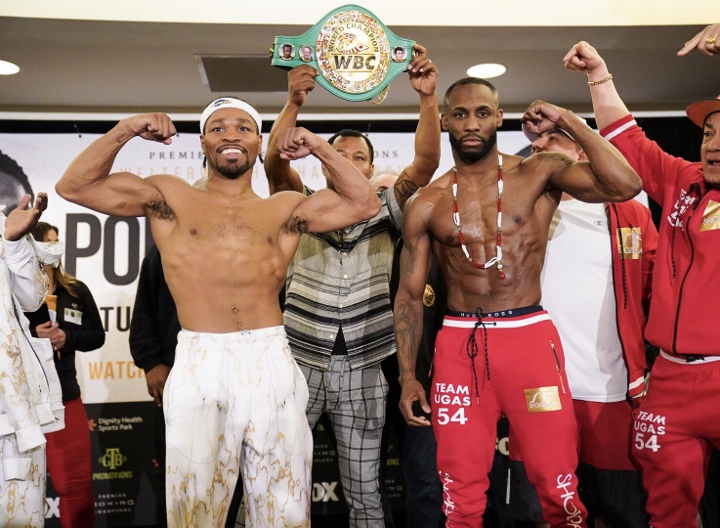 The Pick: Porter struggled on the scale Friday, ultimately cutting his hair to inch across to the line and have a title to defend. Has the one-time amateur middleweight reached a point where welterweight is too much to ask of his body? For Porter, he’d better hope the answer is no because Porter is a fighter who relies on steady, smart aggression. While Ugas is taller, Porter’s arms are just as long and if he can crowd Ugas he might take away the counter body shots the Cuban has made a trademark weapon. For Ugas, the question is if he can establish his jab, catch Porter coming forward, and freeze the often-wild assaults of the titlist. The last time Porter faced someone with a real height edge, good jab, and the patience to box him, he struggled to establish his offense in a loss against Kell Brook. While Ugas doesn’t have the professional experience of Brook coming in, his amateur foundation is impeccable. Porter can make it hard to score against him through sheer will but, factoring in a tough time at the scales, and the new confidence of Ugas on an eight-fight win streak, the pick is an upset by narrow margins. A draw is not out of the question.

A draw would see to be far less likely on the DAZN card (9 PM EST).

The Pick: Smith has good size, works the body well, thuds with a solid jab and follows with heavy hands. All of those things give him a chance to make this an interesting scrap. Ultimately, it feels at most like a puncher’s chance and that’s often slim. Bivol has a better amateur foundation, movement, and offensive variety. If Smith can drag him into a brawl, his hopes improve but Bivol is more likely to control the space, counter Smith, and outbox him with an opening eventually to hand Smith his second stoppage defeat.