So often in close fights, it's said there are several rounds that could go either way which will likely create disparity on the final scorecards.

In the case of Shawn Porter's split decision win over Yordenis Ugas, the judges simply couldn't agree on just about anything.

Porter retained his welterweight title in Saturday's hard-fought scrap with Ugas, which aired live on Fox from Dignity Health Sports Park in Carson, Calif. Judges Steve Morrow and Max DeLuca had the Ohio-bred boxer winning by scores of 116-112 and 115-113, respectively, overruling judge Zachary Young's dissenting card of 117-111 in favor of Ugas. 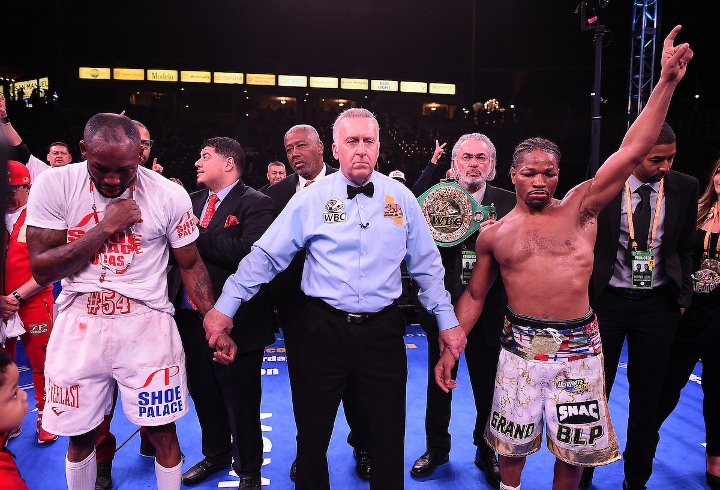 The fight was ugly at times and tightly contested at others, neither of which were of any favor to the three ringside officials who were split on 10 of the 12 rounds.

All three judges agreed on Ugas winning round four and Porter winning nine. The other 10 were all up for grabs in their eyes, which ultimately led to the gulf in scoring between judges Young and Morrow.

DeLuca and Morrow were only one round apart in their final scores, but both took vastly different routes to get to that point as they agreed on just five of the 12 rounds. Both had Porter winning rounds 1, 5, 9 and 11 and Ugas taking the 4th round, one of at least two he seemingly won outright.

The other was round 12, one where Ugas also should have been credited with a knockdown that was instead ruled a slip by veteran referee Jack Reiss. The argument was that Porter's right leg kicked out from what was believed to be water on the canvas, although it occurred as Ugas landed a right hand to his temple.

Had Ugas been awarded a knockdown, he'd have claimed a 10-8 round, which would've produced the margin of victory on DeLuca's scorecard. Instead, the California-based judge is left to explain how in the world he scored the round for Porter, who spent nearly the entire frame fighting in reverse and visibly hurt from the earlier sequence.

Despite their cards being the furthest apart, DeLuca and Young actually had more common rounds between them than any other combination among the three officials. The two saw eye to eye on six of the 12 rounds, awarding rounds 3 and 9 to Porter and rounds 2, 4, 7 and 10 to Ugas.

Both boxers had six rounds apiece where they won on at least two of the three scorecards, which would've meant a final score of 114-114. Porter swept round 9, while winning rounds 1, 3, 5, 6 and 11 on two cards. Ugas swept round 4, while taking rounds 2, 7, 8, 10 and 12 on two cards—although, it would come back down to the knockdown that wasn't called in round 12, which would've given Ugas a one-point victory.

Porter made the first defense of the title he claimed in a narrow win over Danny Garcia last September. Ugas came in as the mandatory challenger for his first career title fight. It is highly likely that his team will file a protest with the World Boxing Council, which would at best enforce an immediate rematch.

I didn’t really score it. It looked like a close fight to me. No one really dominated the other. But it did appear like Porter was pushing the action more and Ugas was waiting a lot.

[QUOTE=Granath;19573487]Sad to say but it wasn't. Watch this at .25 speed. [url]https://youtu.be/-k7NCtz4Jwc?t=17[/url] and watch Porter's back foot. Porter's back toe slips and that causes the fall. It's actually quite clear at that speed. At full speed it's an outstanding call…