Wherever you rank Shawn Porter among today’s best welterweights, there’s no questioning his suit game.

The two-time and reigning welterweight titlist was decked out in a Cleveland Browns-themed checkered suit for a guest appearance on ‘Fox NFL Sunday’ at Fox Studios, on hand to discuss his upcoming Fox Sports Pay-Per-View showdown versus Errol Spence—along with a little football as well.

“I was blessed to be at the Cleveland Browns game last year where the broke the curse versus the (New York) Jets,” noted Porter (30-2-1, 17KOs) during the popular pre-game segment. The Akron, Ohio native was on hand at FirstEnergy Stadium in Cleveland on the night the Browns ended their 19-game winless streak, defeating the Jets during a Thursday Night Football home game. 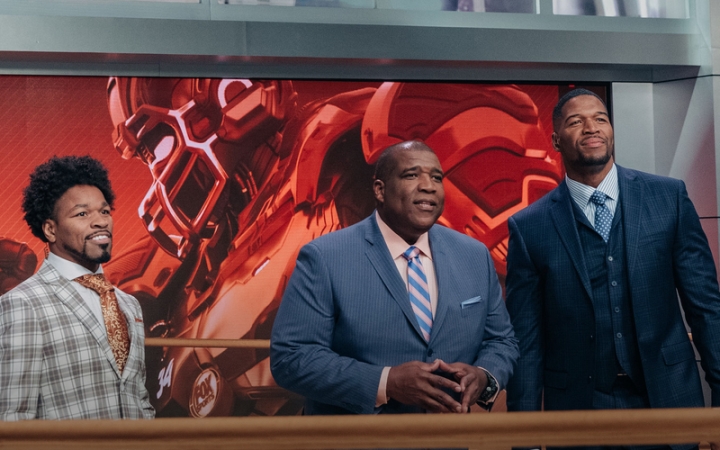 One title defense has followed for Porter, who has also risen to prominence as an in-studio host for Fox Sports’ popular Inside PBC (Premier Boxing Champions) Boxing series. His time spent on the Los Angeles set has complemented his boxing schedule, with his last title defense—a 12-round win over Yordenis Ugas this past March—taking place in Carson, Calif. and his upcoming title unification clash with Dallas’ Spence (25-0, 21KOs) airing live this weekend from the famed Staples Center in downtown L.A.

Still, he’s found time to follow his lifelong favorite football team. The charismatic boxer was once again present for a Browns-Jets game, this time traveling to East Rutherford, N.J. to watch the Browns post their first win of 2019 after getting blown out in their home opener one week prior versus the Tennessee Titans.

“I guess I am (their good luck charm),” Porter quipped to Fox’s Curt Menefee and Michael Strahan, the latter whose father, retired Army Major Gene Willy Strahan was a boxer in the armed forces who boasts a 1-1 record with belated Hall of Fame former heavyweight champion Ken Norton Sr.

As much as Porter would like to take credit for the Browns’ turnaround after going just 1-31 from 2016-17, he’s just as quick to deflect any such claims while revealing his real motivation for attending such games.

“We just go there and try to give them good energy,” notes Porter. “(Spence) was able to do the same with the Cowboys last season (and again earlier this season).

“Hopefully we can do it forward and bring that same (good energy) into the ring.”

The first two weeks of Fox NFL Sunday has averaged more than 5.5 million viewers, up 18% from 2018 which also marked the first year where boxing greatly benefited from network cross promotion. Spence and Mikey Garcia were prominently showcased during the second half of the regular season and throughout the NFL playoffs ahead of the first-ever Fox Sports PPV event in March, which sold a reported 375,000 units while playing to a crowd of 47,525 at AT&T Stadium, the Cowboys’ home stadium in Arlington, Texas.

Going to watch this card at the movies. I really like seeing them on the big screen. If you haven't done it before you should definitely give it a try.

[QUOTE=Oldskoolg;20075544]Intersting thing about dazn is that murkowski has said that the contracts and purses will no longer be inflated. Gone are the days of dazn paying millions over market value. Along with the reworking of the monthly and yearly subscriptions,…

[QUOTE=lieutenant;20075492]They're spending a lot of airtime promoting this fight. I just can't see it selling over 300k PPVs. There is no buzz with casuals on this one, and all the diehards are stingy and will end up streaming it. DAZN…

[QUOTE=Motorcity Cobra;20075477]This is bad for the sport. What grows the sport is limited exposure. The less people who see good fights the better for American boxing.[/QUOTE] I’m convinced that the people who want to see the sport driven to low…