Shawn Porter feels there will be more at stake when he encounters Errol Spence Jr. than two welterweight titles. (photo by Ryan Hafey)

Porter contends that the winner of their 12-round, 147-pound title unification fight should be considered the best welterweight in boxing. The 31-year-old Porter (30-2-1, 17 KOs), of Akron, Ohio, and the 29-year-old Spence (25-0, 21 KOs), of DeSoto, Texas, will meet September 28 for Porter’s WBC welterweight title and Spence’s IBF belt at Staples Center in Los Angeles. 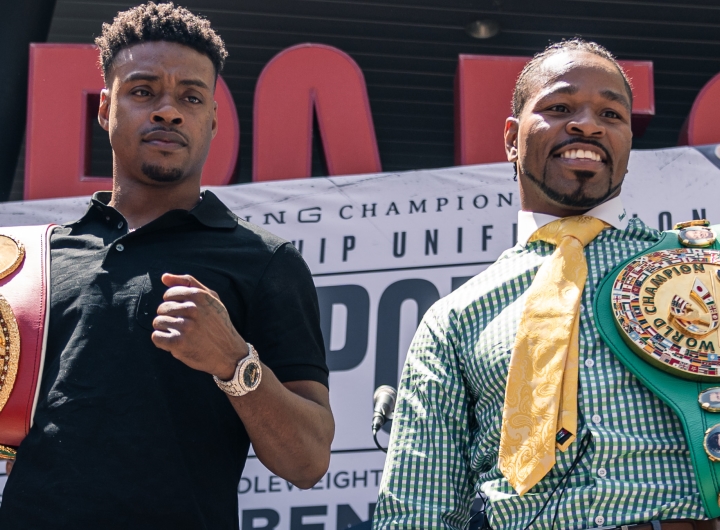 Spence and WBO champion Terence Crawford (35-0, 26 KOs) are commonly considered among media and fans as the top two welterweights in boxing. Crawford, of Omaha, Nebraska, typically is listed within the top three on credible pound-for-pound lists as well.

Nevertheless, Spence agreed later on the aforementioned conference call with Porter’s perspective on the outcome of their fight determining boxing’s best welterweight.

The Spence-Porter winner will be the only welterweight with two titles. Crawford and WBA champ Manny Pacquiao (62-7-2, 39 KOs) each own one.

Most sports books list Spence as at least a 10-1 favorite over Porter. They’ll headline a four-fight FOX Sports Pay-Per-View telecast a week from Saturday night.

[QUOTE=1hourRun;20065775]Interesting order you got there, where do you rank Shawn Porter and Errol Spence in the P4P?[/QUOTE] I don't do P4P

[QUOTE=Travis scott;20067411]Pac already has run from Crawford and spence[/QUOTE] Thurman was the #1 welterweight with the best resume in the division and he just got beat by Pacquiao so Pacquiao is #1 period