Shawn Porter has made a career out of spoiling parties he had no business attending, and was never even invited to in the first place.

The stocky, musclebound Ohioan came up through the junior football ranks as an undersized running back before transitioning to amateur boxing. Still carrying around his football heft, Porter didn’t trim all the way down to the optimal weight for his height, but instead fought at 165 pounds. As a result, he battled the likes of Danny Jacobs, Demetrius Andrade, and even a young Oleksandr Usyk, despite having to tilt his head all the way back to stare them in the eyes.

On Saturday night, he faces not his biggest physical challenge, but likely his toughest test, as he battles Errol Spence Jr. for the unified welterweight championship.

“It's how I was raised.  I can tell you story after story that would confirm that that was how I was raised. But I was ten years old playing football against guys who were 12 and 13 years old and it doesn't sound that big, but back then when you're ten going up against preteens it's a big deal,” said Porter on a media conference call last week. “Even at that young age, my dad has always challenged me and made sure I not only put out my best but I was going up against the best. And you look up, I'm 31 now and this is 100% familiar territory for me because it's where I come from.”

Looking back about three years or so, the 147-pound division was in a transitional period. Floyd Mayweather was on his way out as an active fighter, and his rival Manny Pacquiao, while still active, appeared to be hanging on in spirit, but mostly as a senior’s circuit attraction. It was predicted that the division would soon come down to Spence, Terence Crawford and Keith Thurman, and at least one of them would receive the notoriety boost that would come with beating up a faded Pacquiao in the process.

It hasn’t gone quite that smoothly, however. Thurman was handed the Pacquiao golden ticket after the latter signed with PBC and the fight became a possibility, but improbably lost to the Filipino senator thanks to a historically great “old man” performance earlier this year. But also, one man—Porter—has refused to be pushed out of the room. (photo by Ryan Hafey)

Porter gave Thurman hell in their network cable showdown, and went on to collect wins over stalwarts Danny Garcia and Yordenis Ugas (in fights many expected him to lose), earning him the WBC welterweight strap, and retaining it, respectively. As a result, Porter forced the hand of his intra-promotional foe, and extended the de facto welterweight elimination tournament. In order to unify the division, beating Porter is equally as important as beating Pacquiao.

“I was just looking for the next available guy. I wanted a unification fight too. Shawn Porter was the easiest fight to make and the quickest fight to make. So, that's why I decided with the fight, Shawn Porter,” said Spence on the aforementioned conference call. “I wanted the chance to beat Pacquiao.  Pacquiao is a bigger name and a bigger fight. So, of course I wanted that fight. But Shawn Porter is the champion too. He has the build. So, I definitely wanted to unify too. I knew that if I wasn’t going to get Pacquiao there was going to be a good chance I was going to fight Shawn Porter.” 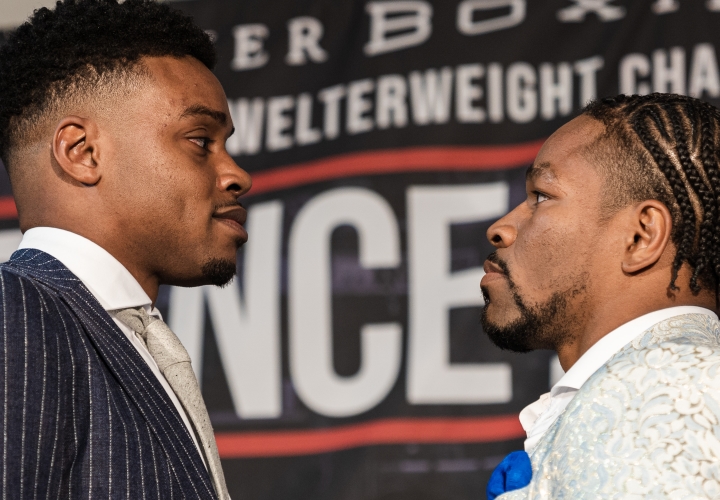 Spence vs. Porter is an intriguing clash of personalities, as much as it is an interesting in-ring contest. Spence is notoriously reserved, exuding a quiet confidence both personally and as a fighter. He trains in a private gym all to himself, where reporters are generally only allowed by invite, and cameras only outside of sparring hours. He seemingly views fight promotion and media obligations as just that, obligations, things to cross off the list of chores. Inside the ring he is calculated and deliberate, slowly breaking opponents down with pinpoint accuracy and gradual pressure.

Porter, meanwhile, has the same strategy as a fighter as he does as a fight marketer: volume and hustle. Stylistically, Porter is a frustrating opponent because of his mauling, high-contact approach. In terms of promoting himself and his fights, he takes a similar approach—he’s a friendly, engaging personality who is happy to grant interviews to anyone and everyone, and is ever-present on social media, sharing everything from Bikram yoga sessions to full length sparring videos. Few fighters achieve notoriety by simply being a really nice guy. Fame through boxing usually comes through outright braggadocio like Floyd Mayweather, outlandish bad behavior like Adrien Broner, or just on-the-nose goofy theatrical acts like Tyson Fury. Porter hasn’t bothered to portray lavish excess or take on a heel persona or even really ham it up. He’s just extremely accessible.

Porter also has the advantage of working as a studio analyst on FOX, which will distribute the bout on pay-per-view, affording him primo promotional slots like an appearance on the NFL Sunday countdown show. As a result, the visibility alone has changed the tenor of this fight from what it may actually be—a “semi final” fight of sorts for a crack at Pacquiao—to a self-contained big pay-per-view fight all on its own. Because of its reach and the fact that it is distributing the bout, FOX has been able to jam Spence-Porter into the general sports discussion. Other fights of equal magnitude airing on competing outlets don’t have the luxury of its participants yukking it up with Michael Strahan.

“FOX has had amazing promotion for all their PBC fights. Really getting bigger than getting slots in between timeouts for the NFL. So it doesn’t get bigger than that. The promotion's been great and getting all the commercial slots. We’re all very happy to have a promotion like this. It’s been a great ride,” said Spence. “I'm looking for the knock out. So it might be Fight of the Year if he can withstand my punches for all 12 rounds.”

If Porter has its way, it may very well be the Fight of the Year, and one of the most watched pay-per-views of the year as well—whether anyone thinks it should be or not.

[QUOTE=Jrtxboiy;20077679]You sound stupid how is crawford a hof fighting straight garbage porter and spence have a better resume[/QUOTE] Fighting for Arum is not a hof move... Why didnt Crawford learn from Mayweather and Oscar!? With that said, I believe he…

Porter with the upset. Then u all cry. ALL HAIL PAC GOAT.

Nicely writtten piece. Enjoyable to read. I can't wait to check this fight out. I totally agree with Porter and his fams assessment on Spences opponents, especially on how all his opponents end up conformative for Spences style, eventually allowing…

If Porter tries to fight Spence like he did Ugas? He not only loses but by tko. That said.. Porter does have one advantage that can work for him. His own style but to another level. Any time Porter's head…