Porter: I Guarantee A Rematch With Spence Would Be Much Better Fight

Errol Spence Jr. and Shawn Porter produced one of the most fan-friendly fights of 2019.

Porter predicts that a rematch would be even better. The former IBF/WBC welterweight champion isn’t sure if it’ll ever happen, but Porter would welcome a second shot at Spence whenever the unbeaten Spence is ready.

Porter discussed a possible rematch with Spence during the newest episode of Impact Network’s “Stars and Champions,” which debuted Friday night.

“I would love a rematch,” Porter told host Dan Rafael, a BoxingScene.com contributor and former ESPN.com writer. “I think that things, you know, definitely will play differently in a rematch for me.” 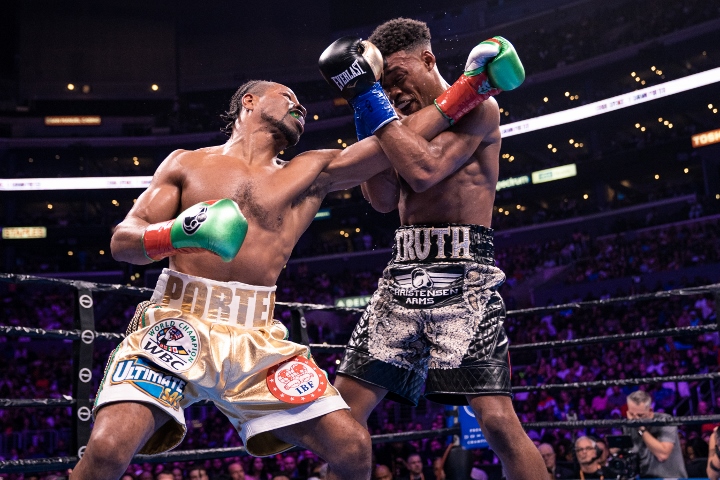 Spence topped Porter by split decision in their 12-round, 147-pound championship unification match September 28 at Staples Center in Los Angeles. Porter learned plenty about Spence during those 36 minutes, though, enough to determine he would win if they box again.

“I describe myself as a chameleon in the ring,” said Porter, who was knocked down during the 11th round. “I think that I have a lot of dimensions. I have a lot of tools, and I can bring a lot to the ring in any given night. And I think if I perform one way one night, more chances than not I’m gonna perform a completely different way the next night. You might see some similarities in the aggression, some similarities in the punch output and the combinations, and things like that.

“But in terms of being unpredictable, in terms of being able to get someone off balance, and catch them with things they didn’t expect the second time around, I do think that I’m definitely worthy of that. I think that this fight, a rematch with him, would be well worth the ticket or the pay-per-view buy. Obviously, the first one was. And I think sometimes people say, ‘Well, how much better could it get?’ Or, ‘How much different could it get?’ I guarantee you the fight will be a little different and much better.”

“There were a lot of close rounds,” Porter said. “But here’s the thing – in a fight like that and a night like that, you really can’t be mad [about the decision] when so many celebrities and so many eyes and so many hearts were into that fight, and wanted to see something great. And they saw greatness. And I feel like I was a part of greatness that night.”

[QUOTE=ShoulderRoll;20588160]Sorry Porter, but that fight doesn't make sense right now. It's not a good time. Just like you said for a fight between you and Crawford.[/QUOTE] The time is never right to get knocked out. Porter not only beats Spence…

Porter beats Spence in a rematch at WW...I'll put money on that.

And Ugas would be too because he wouldn't want to lose again like the robbery in the first fight.