Porter Believes Pacquiao Can Be The First To KO Broner

WBC welterweight champion Shawn Porter believes WBA “regular” counterpart Manny Pacquiao can be the first man to stop four-division title-winner Adrien Broner on January 19 at The MGM Grand in Las Vegas on Showtime Pay-Per-View based on his ring experiences with both fighters.

A two-time 147-pound champion, “Showtime” Porter  (29-2-1, 17 KOs) twice served as a sparring partner for Pacquiao (60-7-2, 39 KOs) in advance of the eight-division champion’s one-knockdown, 12th-round TKO of Miguel Cotto (November 2009) as well as the Flipino southpaw’s one-knockdown unanimous decision over Shane Mosley (May 2011). 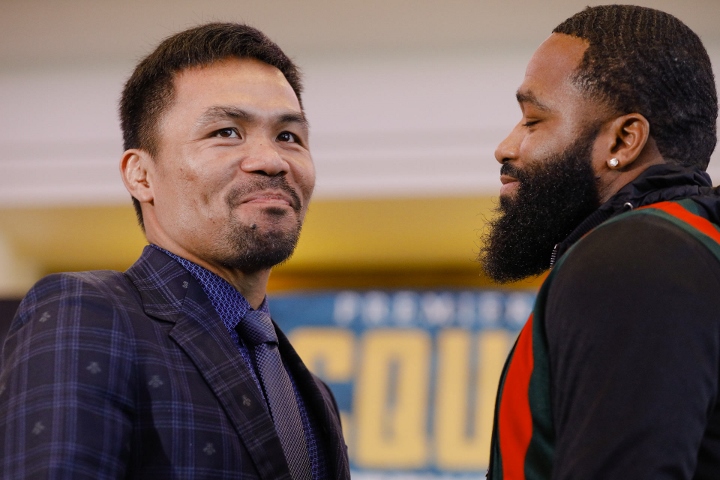 “Manny Pacquaio wins this fight,"  said Porter of Pacquiao, who turns 40 next month. "If he turns it up right away, he can very well get Adrien out of there. I think this fight goes however Pacquiao wants it to go.”

The 31-year-old Porter will make the initial defense of his WBC title on March 9 in Las Vegas against 2008 Cuban Olympic bronze medal winner Yordenis Ugas (23-3, 11 KOs), a 32-year-old winner of eight straight fights—four by knockout—while competing from 140-to-158 ½ pounds.

"Pacquiao might allow Adrien to come out and get comfortable, covering up and blocking those shots," said Porter. "We've seen Pacquiao do that with the likes of Miguel Cotto and Shane Mosley, but I expect this to go in the manner Pacquiao determines."

But Broner is 6-0 with five knockouts against left-handers, and has vowed “to do what I always do to southpaws and dismantle him” similar to what Rustico Torecampo (February 1996), Boonsai Singurat (September 1999) and four-division champion Juan Manuel Marquez (December 2012) did in finishing Pacquiao.

Marquez had swapped knockdowns with Pacquiao before flattening his arch-rival with a blistering, straight right hand counter with one second left in the sixth round. Pacquiao walked into the punch, which left him flat on his face near the ropes and his own corner.

“The Pac Man” has “been knocked out three times,” said Broner, adding "he can go out and go to sleep.”

Broner’s list of vanquished left-handers includes eighth- and 12th-round TKOs of Antonio DeMarco (November 2012) and Khabib Allakverdiev (October 2015) at 135- and 140-pounds for his second- and fourth crowns.

Broner was the first man to stop Allakhverdiev, ending a 32-month knockout drought since a fifth-round TKO of 135-pound Gavin Rees (February 2013). Broner dethroned DeMarco while Allakverdiev was a Russian two-time title challenger against whom he earned a vacant WBA crown and his fourth in as many divisions.

Broner lost his 140-pound title at the scales prior to his next fight in April 2016, a ninth-round TKO of Ashley Theophane. He then won a split-decision over former sparring partner Adrian Granados in a 146 ½-pound bout in February 2017.

“I feel like [Pacquiao] can’t beat me," said Broner, 29. "Look at my resume – what do I do to southpaws? I stop them. Going into this fight, I’m very confident."

Gotta agree with Porter. AB gonna get dropped unless he runs well.

[QUOTE=Tatabanya;19332273]No, not for 12 rounds. Naturally. But scenarios I may see include Manny getting old overnight - he is 40, after all - and Broner having trained enough to warrant PacMan a harder than expected fight, which he could grab…

Broner is physically capable of easily beating an old Pacman, the question to be answered is will he have the sense and determination to do so. Pac is on borrowed time, someone is going to beat him, badly.

Adrien will fight to survive. Fight ends up looking like the Pac-Vargas match