Plant: Lee is Facing Someone Who is Ready To Die in The Ring

The cut over Caleb Plant’s right eye was bad, but he had seen worse than what was taking place in the biggest fight of his professional boxing career – an IBF super middleweight title fight against Jose Uzcategui in January.

Whether it was his formative years in Ashland City, Tennessee, or the day – and every day after - he lost his daughter Alia, Plant had enough in his chest that a little blood wasn’t going to bother him.

“Anytime I need to dig deep in a fight or sparring, I just think back to my childhood, where I grew up without,” said Plant. “There are dark places in my childhood that I never want to experience ever again.  A perfect example presented itself when I got cut in the Uzcategui fight.  I could have folded, but I dug deep and dropped him shortly after.  Or in the later rounds when he thought he had me hurt, I stood my ground and stopped him in his tracks.”

Two knockdowns and a disciplined effort allowed Plant to dismiss the cut and hold off a late charge from Uzcategui to win a unanimous decision and his first world title. It was one of the feel-good stories of 2019 thus far, as the kid who came up the hard way and battled through the tragic death of Alia due to a rare disease that took her before her second birthday got his shot and made the most of it.

Now Caleb Plant is a world champion. On Saturday, July 20, he makes the first defense of his title against unbeaten Mike Lee. Some would say the real work begins now. Plant says it never stopped.

“I have no other options in life,” he said. “I’m all in when it comes to boxing.  I have no Plan B; this is it.  I knew when I started this journey at nine years old that this is what I was going to do.  I knew I was going to be a world champion one day.”

To many, the fight against the relatively untested Lee is seen as a gimme, an optional defense on the Manny Pacquiao-Keith Thurman card in Las Vegas that will expose Plant and his story to a wider audience and begin the process of taking him from solid young champion to star. Given some of Plant’s comments about Lee in the lead-up to July 20, you might assume the 26-year-old agrees with that assessment, but he still has to fight someone who has painted a target on his back, so he will find motivation where he has to.

“Mike Lee is undefeated and coming down in weight to fight me, so he’s the bigger man,” said Plant. “In addition, he has a chip on his shoulder being the underdog.  All these factors have me fully motivated. I never overlook any fight.” 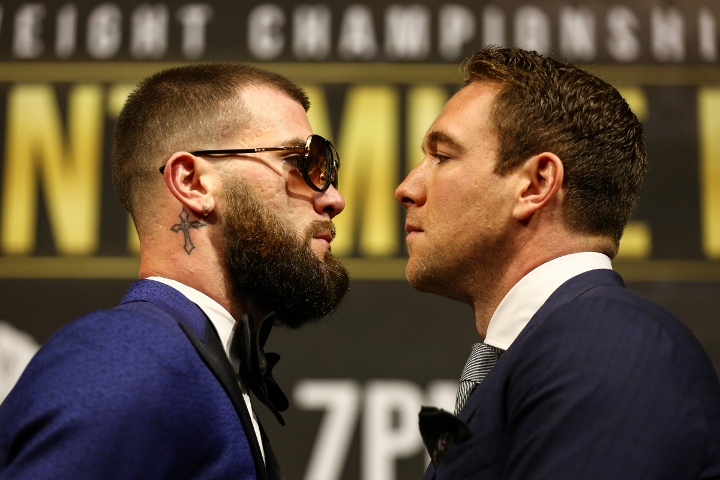 Through 18 pro fights, the former amateur standout has lived up to that last sentence, as he has the 18 wins and no losses to show for it. But the rise of the 21-0 Lee to this point is seemingly a sore spot with Plant, who doesn’t believe the Chicagoan has paid enough dues in life or the ring to get a world title fight. Regardless, they’re going to fight in a couple weeks, and Plant will make his final judgement after the two throw hands.

“I admire anyone who steps in the ring, but Mike Lee must earn my respect as a fighter,” said Plant. “He’s never fought at the championship level and only time will tell what he’s all about.  He’s done good for himself to reach this level, so I can’t knock him for that.  He’s beaten everyone he’s faced, but he’s in there with a different animal now, one who is ready to die in the ring, one who is at the top of his game, a man on a mission.”

That mission is simple. Beat Lee and then go about the business of unifying all the belts at 168 pounds. Well, simple in theory given boxing’s various factions and affiliations. So while bouts against the likes of Billy Joe Saunders, Callum Smith and Canelo Alvarez could be difficult to pull off, the most winnable of the bouts against fellow titlists is one that is the easiest to make, as Plant and Anthony Dirrell both fight under the PBC banner. Those are just details, though. Give Plant credit for being ambitious, because he is just that.

“Winning a world title was “A” goal, but it wasn’t the goal,” he said. “I still have a lot to accomplish in this sport.  To be quite honest, I’m more prepared for this fight then I was for the Uzcategui fight, and every fight from here on out is my biggest fight.  Once you become a world champion, the target is on your back.  Knowing that, I’m determined to keep this belt with the goal to become the first undisputed super middleweight champion in boxing history.  That feat has never been accomplished.”

All it takes is one punch from Lee to put that all on hold, but Plant is well aware of the roadblocks that can be thrown in someone’s way. He’s seen a lot of them, from losing Alia to key injuries to the tragic death of his mother in March. If it seems like the world was conspiring against Plant making it here, you won’t find too many arguments against that notion. But he’s here, and there’s a lot to be said for that.

“Where I come from, all you can do is go up,” said Plant. “There are many roadblocks and distractions that would keep most men down, but I’m not most men.  I have a desire in me that is unprecedented.  Losing a daughter is something I wish on no man, but I had to overcome this tragic time in my life.  It wasn’t easy, but I had to keep a promise to her, and that motivation is what keeps me going today.  There is nothing in the ring that can compare to losing a daughter.  So I fear nothing, because the worst thing that can happen to a man already happened to me.  Alia is still with me today, she’s my guardian angel, my motivation.”

Maybe Caleb Plant can run the table on those other super middleweight champions and become undisputed champion. He’s already beaten more odds than most. What can a couple gloved fists do to him?

“I want to unify all the titles and take claim as the best super middleweight champion to ever lace ‘em up,” he said. “That’s a tall task for anyone, but I’m no ordinary individual.  I was born to fight.”

[QUOTE=Crying Brandon;19876250]Wilder revolutionized all of combat sports. :haha: Dude had Paulie talking about wanting to put Lobov in a coma, & now Plant wouldnt mind dying in the ring.[/QUOTE] Dude, I noticed that too. All of a sudden everyone is…

This division can really heat up. The champs, plus canelo, throw Triple g, Danny Jacobs and Bivol in the mix and there’s a lot of nice match ups. Also Andrade is a giant middleweight. It’s crazy the guy ever made…

Plant has had to go through a lot to get to where he is. Mike Lee on the other hand has had everything handed to him because of his connections. Including Subway endorsements. I don't see Caleb losing to someone…

[QUOTE=MEXfistology;19876203]If you would be ready to die in the ring you woulve fought David benavidez instead, puzssy[/QUOTE] Agreed. You dont need to be ready to die just for Mike Lee.