Plant: It Was Destiny To Win My First Title in the City of Angels

Caleb Plant knew it was fate that his first shot at a major title just so happened to land in the same month of the passing of his infant daughter, Alia nearly four years prior.

An even greater blessing came in its final location.

The 26-year old super middleweight from Ashland City, Tennessee—who now lives and trains in Las Vegas—made the most of his debut on the title stage, twice flooring Jose Uzcategui en route to a title-lifting decision win Sunday evening at the Microsoft Theatre in Los Angeles.

"It was always my destiny to win my first title in the City of Angels, where Alia has always belonged," Plant (18-0, 10KOs) said in scoring the biggest win of his career. 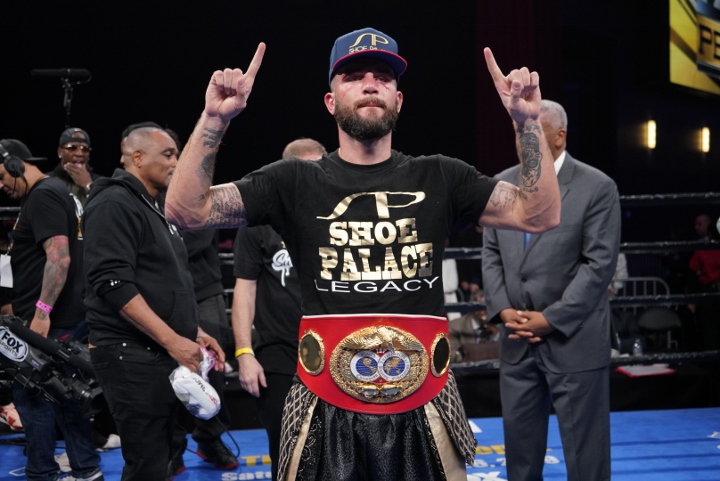 Her passing forced Plant to withdraw from a scheduled six-round contest in Bethlehem, Penn., a bout with which he was willing to proceed even through Alia's declining health as he'd dedicated his entire pro career to winning a world title for his princess.

Despite having to miss that January club show, the 2012 U.S. Olympic alternate has never stopped fighting to honor his daughter. That very drive led to his fighting his way through the ranks and becoming the mandatory challenger to Uzcategui's title, although his patience was tested when a broken hand five weeks out from their originally scheduled date last summer in Las Vegas forced a postponement.

It also led to a change in location and a much larger platform.

Sunday's title fight headlined the first Premier Boxing Champions (PBC) on FS1 telecast under the new lucrative and long-term deal reached between PBC and Fox Sports last fall. It meant a larger promotion for the event and a wider audience introduced to Plant's backstory and Alia's brave stand during her all-too brief life.

Plant's own angel on his shoulder willed him to victory on a night when the odds were literally against him. He initially opened as a heavy betting underdog, with absurdly high odds bet all the way down to just +135 by the opening bell.

The win didn't come easy by any stretch, with Plant overcome a gruesome cut over his eye suffered during a 4th round head clash and in search of his second win as fatigue appeared to set in during the second half of the contest. Still, a strong first half open—where he nearly swept the first six frames on all three scorecards including a pair of 10-8 rounds for knockdowns in rounds two and four—and savoring sage advice from his career-long trainer Justin Gamber in the championship rounds produced the victory, making Plant the first Tennessee-born boxer to win a major title since 1990, when Memphis-born Thomas 'Hitman' Hearns claimed his title fight victory spanning five weight divisions in a June '91 win over Virgil Hill.

Of course, there is a glaring difference in the notoriety surrounding the careers of Hearns—a 1st ballot Hall of Famer as part of the Class of 2013—and Plant, who only recently has begun to gain the respect his career and lifelong journey has long demanded.

"For as long as I've wanted to box, my goal has always been to inspire others," said Plant. "I want those looking at my career to say that if I can do it, they can do it too.

"I always knew that I can do it, as Alia is always looking down on me, keeping a close eye on me and protecting me every day."

[QUOTE=Corelone;19434212]My only criticism is Caleb was breaking down, he was starting to leak and getting out worked at the end. He could have finished better.[/QUOTE] I totally agree. But I think that bit of adversity will help become a more…

[QUOTE=tatot;19433395]GGG should move up and fight this guy to try and redeem himself.[/QUOTE] I don't mind that idea. I really just want to see GGG back in the ring in whatever form it eventually takes.

[QUOTE=bulldognyc;19433426]Very good and complete performance. Caleb really proved a lot on Sunday. Although Uzcategui was slightly overrated off a very good win over Dirrell, plant showed several dimensions to his game. Hopefully him and David Benavidez meet in the future.[/QUOTE]…

Dude made a fan outta me! How can you belittle his accomplishment? Took the challenge to fight one of the top champions in their prime and while coming off a near year lay-off with no tune up not to mention…

Intriguing...let’s see how plant fairs against other 168 champions and we shall see if he can unify the belts in his division and also beating other competitors, good win though against Uzcategui