Plant: I'm a Better Fighter Than I Was Before The Uzcateugi Fight

Caleb Plant (18-0) will make the first defense of his IBF super middleweight title on Saturday against veteran light heavyweight Mike Lee (21-0).  The fight will headline a free-to-air broadcast on FOX that will serve as the lead in to the Manny Pacquiao-Keith Thurman pay-per-view event that will begin at 6pm pacific.

The 27-year-old Plant captured his world title in January with a dominant unanimous decision victory over Jose Uzcategui.

Most champions have a target on their back after winning their titles but Plant said that he still feels like the hunter and not the hunted. 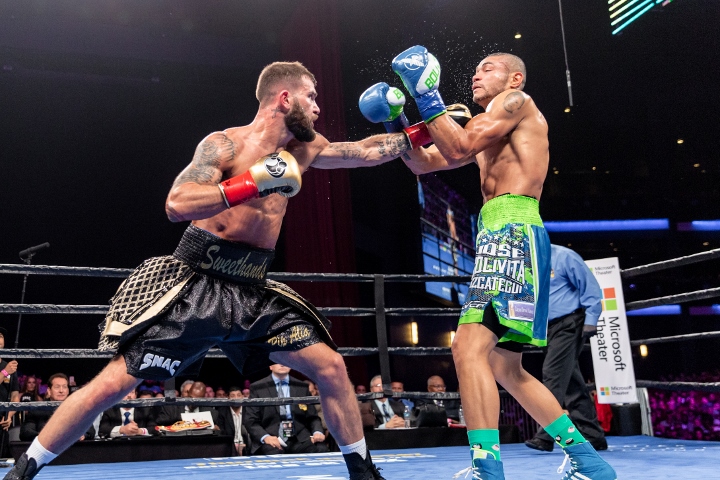 “No, I am not. I am still the hunter. Most people I guess when they get in this position they feel like they are the hunted but I am still hunting. I am just getting started. I don’t feel like I am the hunter. I am still looking for prey,” Plant told BoxingScene.com. "It was a goal to become world champion and not the goal."

Lee has campaigned at or above the light heavyweight weight limit for the entirety of his career. He will also be taking a huge step up in class against Plant.

That step up in class may be even bigger because Plant said that he is a better fighter now than he was before the Uzcategui fight.

“Absolutely. The confidence and just my ability in general from both an offensive and defensive standpoint. My confidence and everything is better. I got a hold of it and I just felt like I want to take it to another level,” Plant stated.

The army, the marines, all military. Who cares? So far up your own ass you think your farts smell like a lavender bush. Typical brainwashed tool of the military. Lemme guess highest rank you've ever achieved is NCO because you…

[QUOTE=BoloShot;19914674]I'm Irish so you got it all twisted I owe you nothing. The Soviets beat the Germans more than the Yanks did and I hate communism but they deserve more credit for that seeing as they actually reached Berlin. Japan…

[QUOTE=Boxingfanatic75;19914652]I don’t want your respect and never sought it. Not a benefactor? The all volunteer military makes it possible for you to come here and espouse your views. And FYI being a Marine isn’t “a job” like that of a…

[QUOTE=BoloShot;19914639]No I read perfectly well. I think your military isn't main benefactor for helping my country in any way, so I owe you and your people 0 respect. My grandfather served in Vietnam and he knows it was a sham…

[QUOTE=Boxingfanatic75;19914635]Oi vey you don’t read so we’ll do you?[/QUOTE] No I read perfectly well. I think your military isn't main benefactor for helping my country in any way, so I owe you and your people 0 respect. My grandfather served…