In the main event of FS1 PBC Fight Night and on FOX Deportes Saturday night from Rabobank Arena in Bakersfield California Alfredo Angulo (34-2-1, 23 KOs) won a hard-fought but close split decision over Peter Quillin (26-7, 21 KOs).Judges scored the bout 96-94, 97-93 for Angulo and 96-94 for Quillin. (photos by Stephanie Trapp) 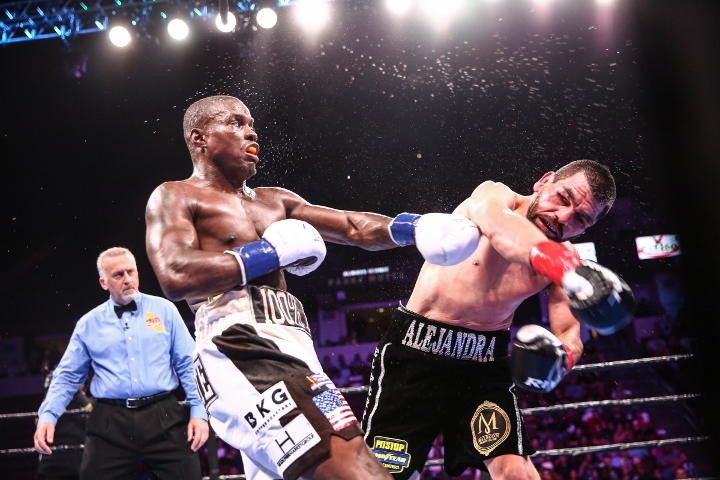 The whole fight was back and forth competition with Quillin able to start early by establishing his jab and footwork to stay away from Angulo's come-forward style. However Angulo was not far behind as by the third round the fight turned into a phone booth fight with both fighters turning up the volume of punches and staying within close range. 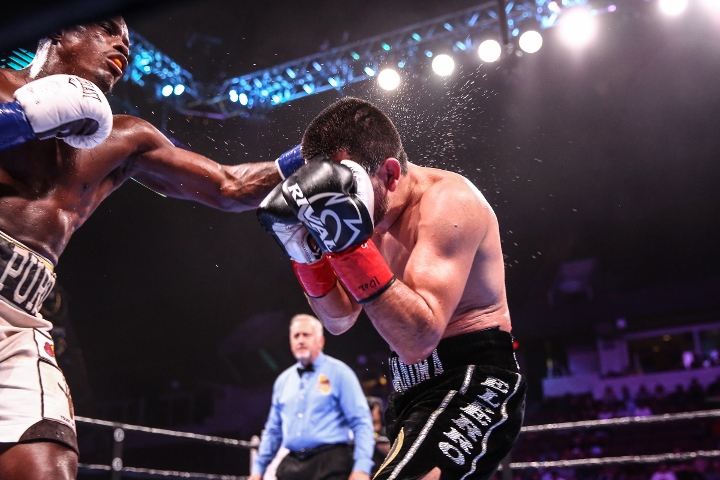 The tempo changed drastically in the 4th round when Angulo landed a heavy straight right hand that stunned Quillan. Angulo continued to apply pressure with bigger shots in the second half of the fight while Quillin used his jab and his own power shots to try to win the rounds. In the end it was "El Perro" who came out the victor. 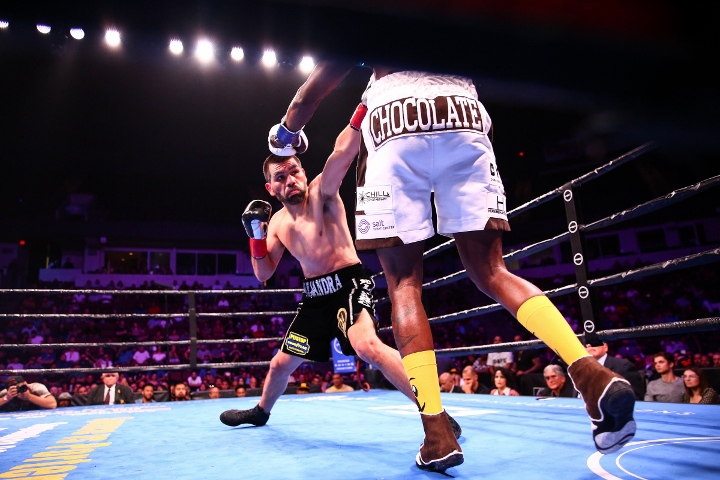 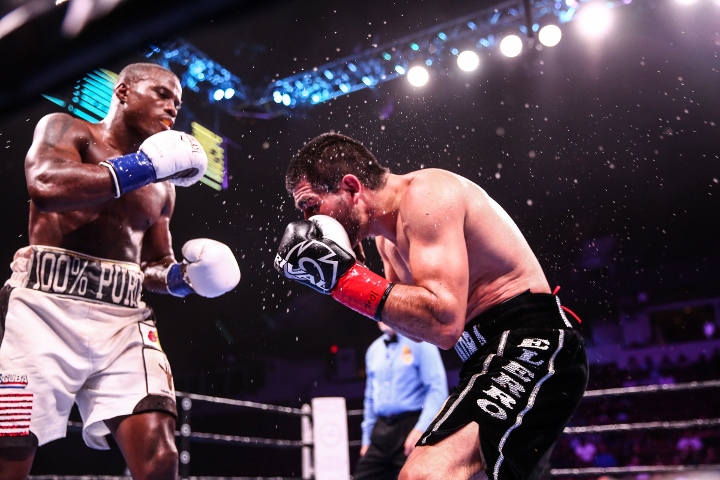 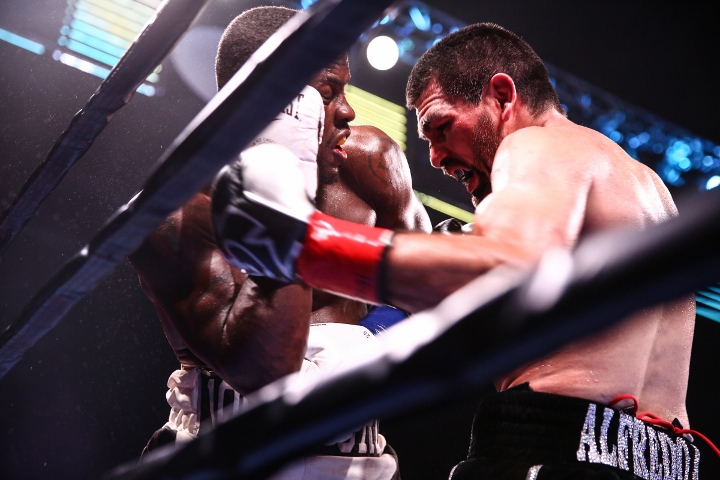 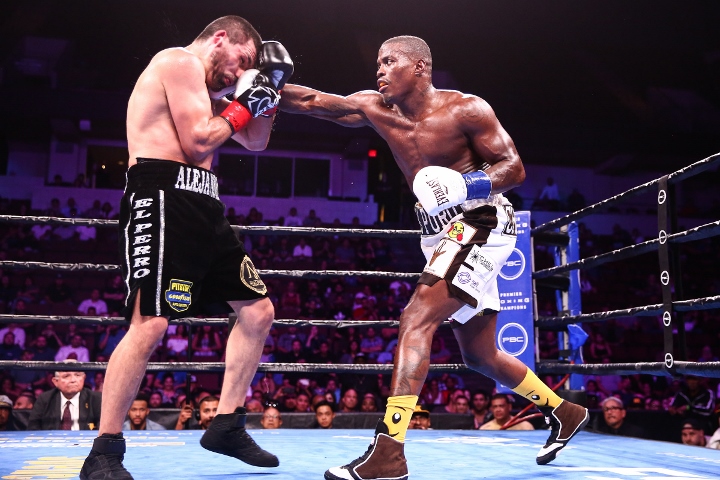 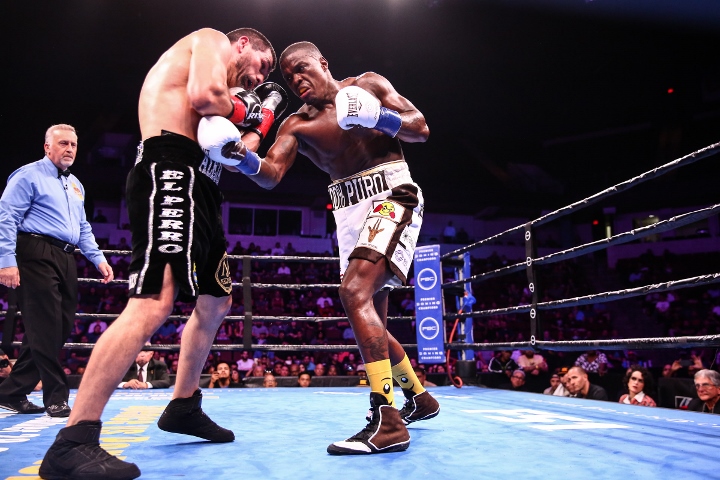 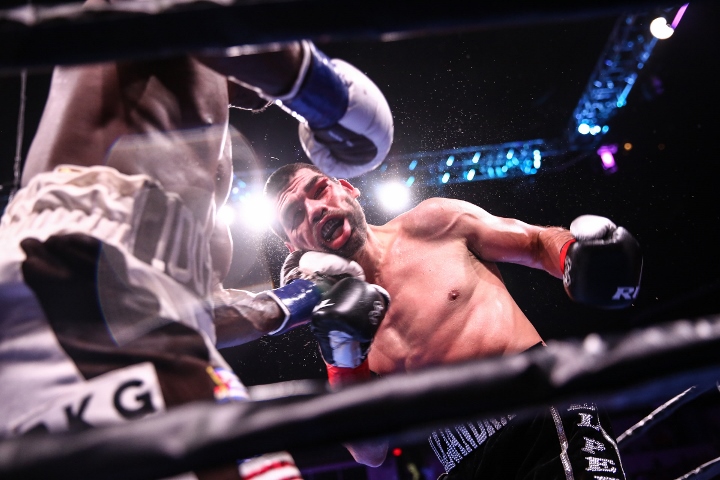 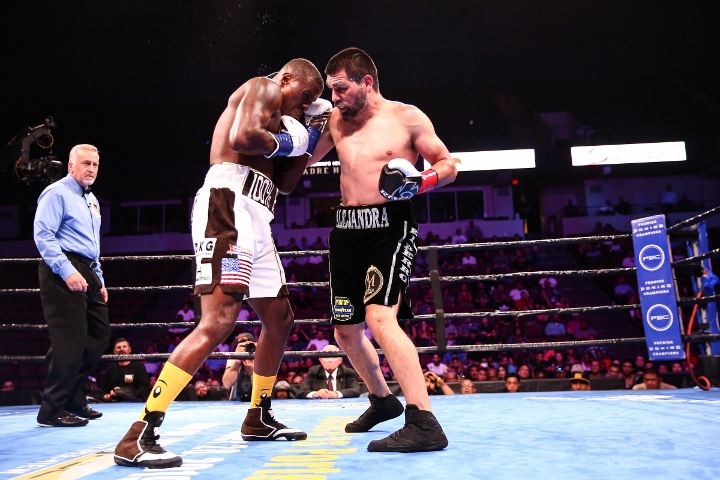 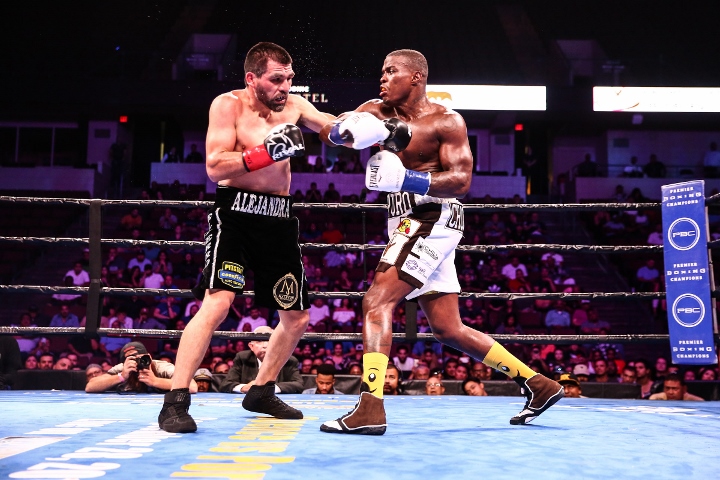 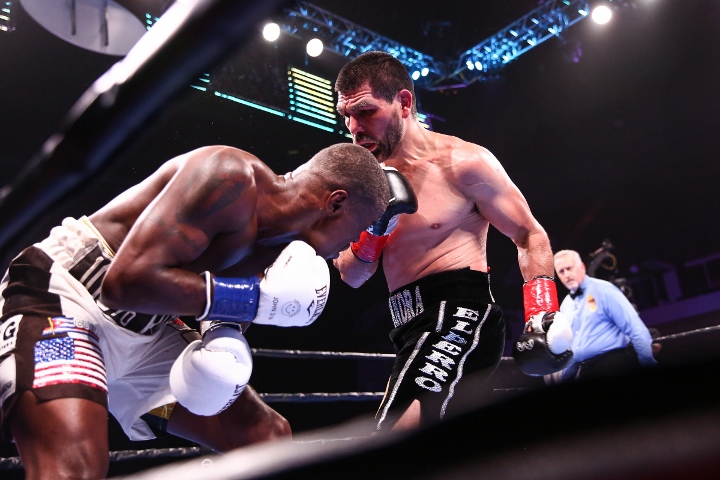 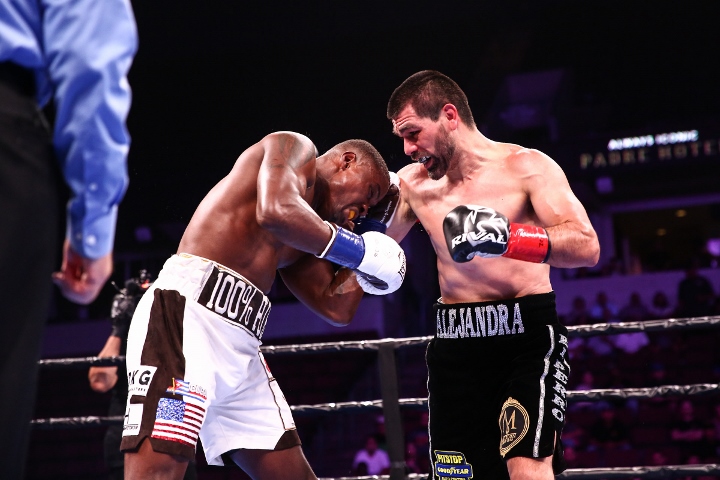 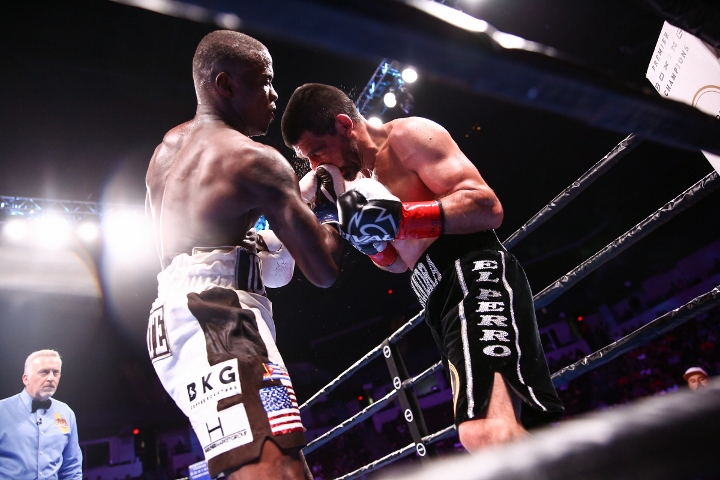 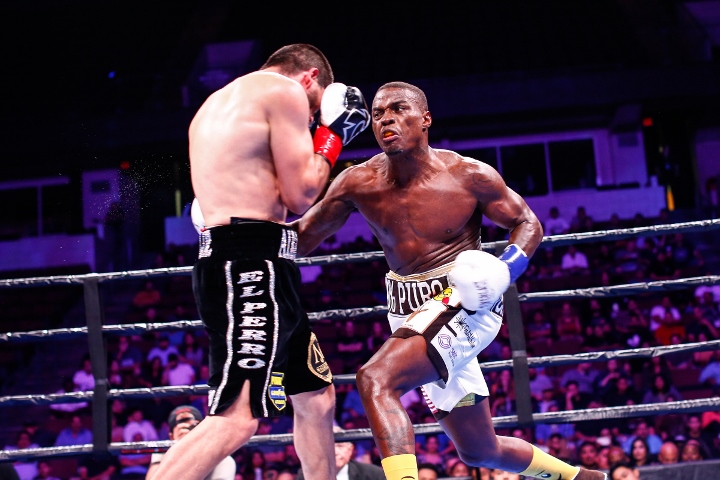 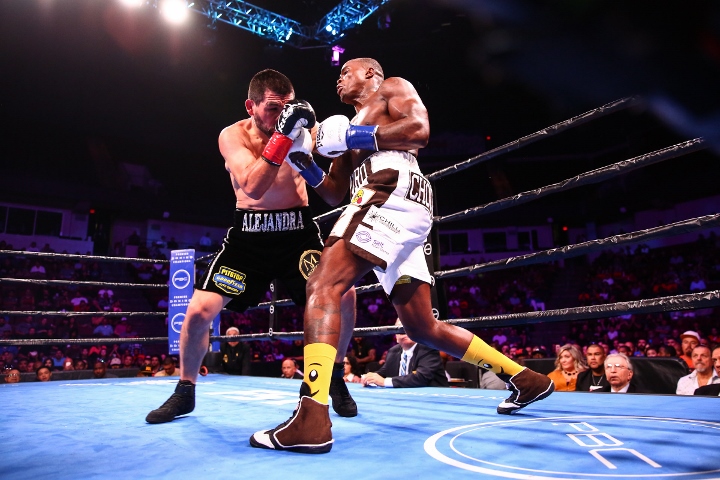 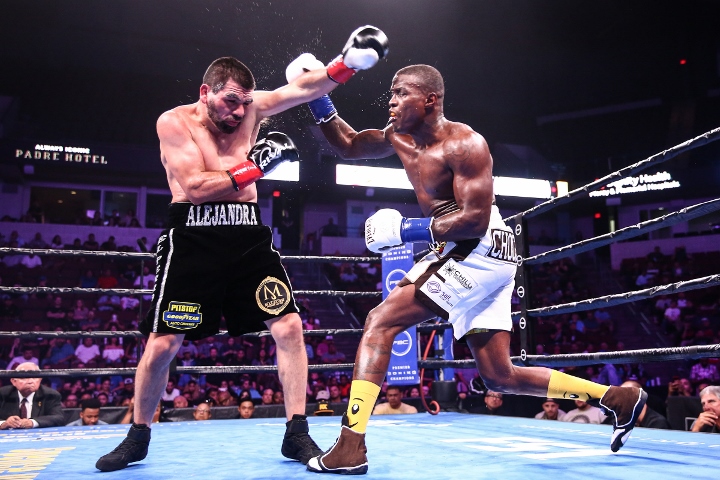 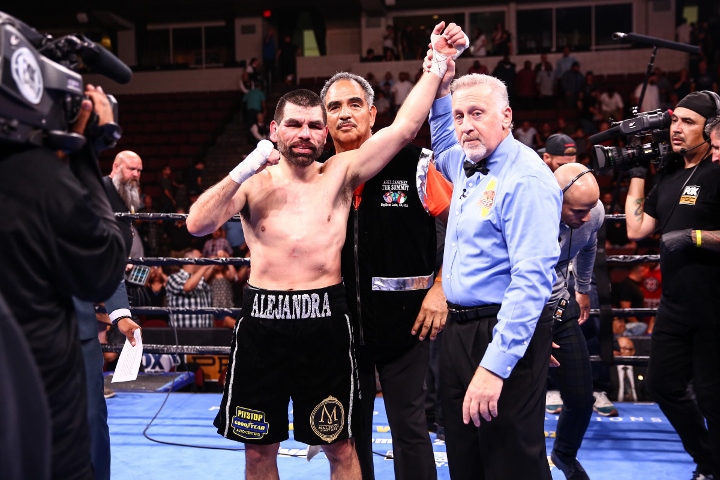 Abel Sanchez fell hard. From GGG to Angulo. Wonder how much he made to train El Perro.

Angulo is going to get seriously hurt. There is a highlight-reel knockout in his future similar to Bam Bam Rios vs Danny Garcia. I feel it for Kid Chocolate though, he gassed early, and it looks like he didn't train…

Quillin was scared to fight And Angulo was happy about it. Kid Chocolate looked like he was wincing with every slow shot thrown his way. In short, both need to hang em up. It was a sad site.

Judging from the pictures it looks like quillin won lol

ADD COMMENT VIEW COMMENTS (4)
Advertisement
Top Headlines Bob Arum: We Think Ajagba Can Be Among Top Heavyweights In The World Ennis: Extra Weight Won’t Matter For Abreu; I'll Go In There & Get The Stoppage Pedraza: As I Keep Moving Forward, Fights Will Keep Getting Tougher And Tougher Alex Saucedo vs. Arnold Barboza Jr. To Co-Headline Lomachenko-Lopez On 10/17 Erickson Lubin: You Could See How Much I've Changed Since The Charlo Fight Jaron Ennis: I Might Have To Get Into A Mandatory Position To Get A Title Shot Ajagba: Time Away From Ring Was Frustrating, Hurts To Not Be Able To Do Something You Love Nyambayar: I Had A Sprained Ankle Against Gary Russell; I'd Love A Rematch Lubin: I'm Fresher, Hungrier Than Lara & Trout; Looking To Make Statement Against Gausha Pedraza: I Think Lomachenko Will Dominate Lopez, But He Can't Get Reckless Daily Bread Mailbag: Charlo Brothers, Ennis, Canelo, Spinks, More BoxingScene.com's Television Pick of The Week - September 19 McKenna: Beating Ohara Davies Will Be Highlight of My Career Joe Joyce: We'll See if Dubois Can Take My Heavy, Powerful Shots! Frank Warren: Whyte Received Shorter Medical Suspension Than Spelman? Francis Chua Aims To Fight, Looks To Kambosos, NG, MacKenzie Boxing Facing Financial Adjustments Johnny Nelson Confident Whyte Would Have Benefited With Tibbs in Corner Vijender Singh Hopes To Resume Career Before Year is Over Josh Taylor Must Remain Focused on Khongsong, Says Ben Davison Javier Molina: Pedraza Looked Good With LesPierre - I'm No LesPierre! Amir Khan Appointed as President of WBC Middle East Boxing Council Ajagba vs. Rice, Ramirez vs. Caraballo - Ready To Fight Jose Pedraza, Javier Molina - Set For Showdown in Las Vegas Pedraza-Molina ESPN+ Weigh-In Report From The Bubble Ennis vs. Abreu, Nyambayar vs. Breedy - Set For Bouts Erickson Lubin, Terrell Gausha - Ready For WBC Eliminator Haven Brady Jr. Inks Promotional With Top Rank Crawford vs. Brook Negotiations at Advanced Stage For November 14 Zhang Zhilei Inks Promotional Pact With Eddie Hearn Juan Carlos Abreu Comes In 3-Plus Pounds Overweight For Jaron Ennis Fight Rene Tellez-Giron Return Pushed Back Due To COVID-19 Terrell Gausha: I Was Nervous That I Wouldn't Get This Fight Again Teofimo Lopez: Lomachenko Is On His Way Out, I'm Looking Through Him Jermell Charlo: I Don't Want Judges To Make Decision For Me Against Rosario Hearn on Yarde-Buatsi: It's a Massive Box Office Fight at The O2 Abreu: Either Jaron Ennis Knocks Me Out Or I Will Knock Him Out Bilal Fawaz Inks Agreement With MTK Global Lewis Ritson Vows To Fight His Way To a WBA Title Shot Fury vs. Joshua: Hearn Says Deal On The Verge of Being Put on Paper
Advertisement
Latest Boxing Videos 'The Journey - Charlo Doubleheader' 30 Minute Special Showtime Releases Trailer For Documentary 'Ringside' Charles Martin Reacts To Helenius Stopping Kownacki Robert Helenius Reacts To Shocking TKO of Kownacki Adam Kownacki Reacts To TKO Defeat To Helenius Joseph Parker Reflects on Fury-Wilder, Talks Return Mikey Garcia Reflects on Fury-Wilder, Talks Vargas Eddie Hearn Reflects on Fury Stopping Wilder, More Kenny Porter Reacts To Tyson Fury Stopping Wilder Jose Ramirez Reacts To Tyson Fury Stopping Wilder
Recent Top Stories Graveyard Shifts At Warehouse Motivated Molina To Turn Around Boxing Career Erickson Lubin vs. Terrell Gausha: The Play-In Derevyanchenko Vows: I'm Ready For Everything in Charlo Fight Remembering "The Showdown" – Still a Thrill After 39 Years
Advertisement
Latest Forum Threads
Advertisement
Advertisement
This website may contain adult language.
TM & © 2020 BoxingScene. All Rights Reserved.