Sometimes, there are just fights for fighting’s sake.

There is no title on the line.

No one is going to be screaming about pound-for pound ratings.

Everyone knows going in which fighter is most likely to win but both men have names fans recognize, past performances that left an impression, and are still making a living in the ring. They need each other for a moment and that’s all it is.

Saturday night (FS1, 10:30 PM EST), in a super middleweight contest, 36-year old former WBO middleweight titlist Peter Quillin (34-1-1, 23 KO) steps into the ring for the second time this year, but only the fourth time since a 2015 first round knockout loss to Daniel Jacobs in December 2015. He’ll stare across the ring at 36-year old one-time Jr. middleweight contender Alfredo Angulo (25-7, 21 KO), a winner in his lone appearance of 2019 after dropping consecutive decisions in singular outings in 2016 and 2018.

There was a time when this fight might have lit up the marquee somewhere more common for big time boxing than Bakersfield, a California oil town with one of the best high school football traditions in the state.

From roughly 2011 to 2015, both men were involved in plenty interesting action in their weight classes. Angulo lost memorable wars to James Kirkland and Erislandy Lara and played the rebound opponent for Saul Alvarez after his loss to Floyd Mayweather. Quillin retired Winky Wright, won a title in an exciting scrap with Hassan N’Dam N’Jikam, and traded knockdowns in a draw with Andy Lee.

They weren’t Hall of Fame runs and every run doesn’t have to be. It was solid professional fighting, win, lose or draw. We might get more of it this weekend. 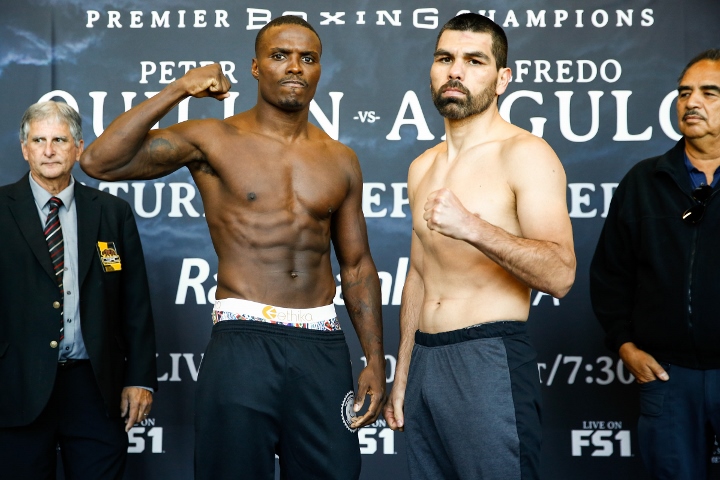 In the case of Angulo, never the fleetest fisted of fighters, make that much slower. Fans who have seen Angulo in one of his recent appearances have reason to not want to see him fight at all anymore. In his last fight, against Evert Bravo, Angulo showed he still has heavy hands against the right foe. In that case, the right foe was a fighter who had been stopped in the first round of his previous two outings.

Angulo more than gave at the office in his career and it would be a shame to see him take more punishment than needed. If Angulo is going to step in the ring, another fighter near his age on the other side of his prime (if less physically declined than Angulo) like Quillin is a better alternative than a young lion making a name.

It’s not to say there are no underlying implications for the fight. Quillin is quietly edging his way toward a title shot at 168 lbs. He’s currently the second highest rated contender in the IBF ratings, putting him in line for a shot at titlist Caleb Plant (19-0, 11 KO).

Quillin may not stand out in the loaded crew of super middleweights in the PBC stable right now, as much due to absence in recent years as to performance, but he shows off their bench. Unlike Angulo, Quillin hasn’t looked a shell of himself yet and could play spoiler on the right night.

To keep ready should opportunity arise, a fight on national television against a fighter with name value might add an extra ass or two to the seats if and when another title shot arrives. Activity and visibility calculations need not be rocket science.

Will it be a good fight? If it isn’t, it might at least be short and that would probably be the best-case scenario for all involved. It’s just a Saturday night fight before bigger fights arrive in the rest of the fall.

And for Angulo and Quillin, that’s a living.

Sergey Kovalev sure looked a hell of a lot bigger than Saul Alvarez at their pre-fight press conference. For the Alvarez detractors who desperately want something to be wrong with this fight, it sure looks like he could have done a better job of cherry picking if that’s what Alvarez wanted…Ryan Garcia isn’t good enough yet for me to really care all that much about his contract situation…The early reviews for Joker are exciting but, let’s be honest, it’s a hard character to screw up…Errol Spence-Shawn Porter isn’t just a quality main event. Top to bottom, it looks like a good card. For the extra money in a saturated market, that should be an expectation from fans…Roman Gonzalez looks like he’s back in shape and ready to test his repaired knee. Does the great little man have another gem or two in holster? Time will tell.

After Quillin made some money and got married, he lost his mojo, the loss to Jacob's was the cherry on top. Just like Barthelemy after he won his second belt.

Angulo? Thought he retired 5 years ago. Should he fighting a top 3.

[QUOTE=Shadoww702;20072625]Same with Walters??? What ever happened to him the Ax-Man?[/QUOTE] He brought down his whole career on his own after he quit against Loma for no reason other than him getting embarrassed. He committed the cardinal sin of boxing &…

Same with Walters??? What ever happened to him the Ax-Man?