Peter Kahn - A Boxing Success Story, 25 Years In The Making

Regardless of the voting results for the Manager of the Year race, Peter Kahn will not only look fondly upon the year that was but also how it has set him up for even bigger business for years to come.

A renaissance man of sorts, the South Florida-based manager enjoyed what many viewed as a breakout year though a run that has been some 25 years in the making. Kahn joins high-powered businessmen Keith Connolly, Luis DeCubas Jr., David McWater and Rick Mirigian in the 2019 Cus D’Amato Manager of the Year race. Winning the award would be an honor he’d of course cherish—but not as important as continuing to build on the momentum, taking the old school lessons learned from his early days working with Hall of Fame promoter Don King to help create his brand in today’s era.

“I feel that I have more experience in the overall scope of the sport,” Kahn noted to BoxingScene.com. “Meaning, in over 25 years, I've just begun to reinsert myself. I also have a vast network outside of boxing that has already proved to be valuable to my clients when it comes to sponsorship and the media.

“I admire all of the nominees and consider all of them my friend. I will be happy for whoever wins and feel that it's well deserved.”

Kahn lands among the honorees for extracting the most talent and opportunity out of arguably the lowest-profile collection of clients. Everyone on his roster accurately reflects his own hustle—hard work and doing things the right way to get you where you need.

Few expected Dennis Hogan, for example, to be competitive with Jaime Munguia, much less arguably deserve the nod in their junior middleweight title fight last April. Hogan’s stock soared in controversial defeat, as did his bank account. The scrappy contender pulled in nearly $1 million in a pair of title fights few figured he’d land in 2019, parlaying the momentum into a lucrative showdown with unbeaten middleweight beltholder Jermall Charlo last December.

Of course, there’s far more to the success story than his athletes proving valiant in defeat. 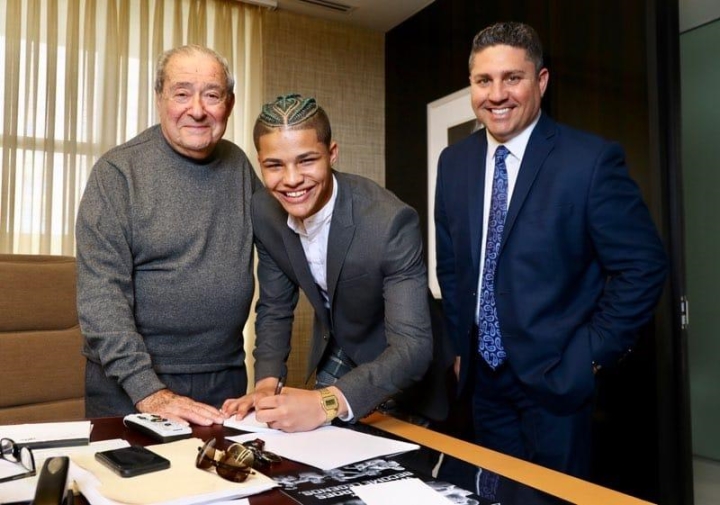 Ghana’s Emmanuel Tagoe (31-1, 15KOs) remains a unique story, with the lightweight contender riding a 31-fight win streak after losing his pro debut. His run includes wins over former titlists Mzonke Fana and Paulus Moses, along with a lopsided 12-round win over veteran contender Vyacheslav Gusev last February to put him in favorable position for a potential title shot or eliminator in 2020.

At the same weight exists George Kambosos Jr. (18-0, 10KOs), a 26-year old contender whose three-win campaign in 2019 included a 10-round win over former titlist Mickey Bey last December. The win has placed the unbeaten Aussie in title contention, currently awaiting marching orders for a sanctioned title eliminator versus another former titlist in Lee Selby.

It’s a long way from Kahn’s salad eating days as a college graduate looking to get involved in the sport in some capacity. A graduate of Syracuse University—having been recruited for the Orangemen’s Division I soccer team—Kahn, born in The Bronx and having spent his youth in Long Island, New York and Dallas, Texas, first landed at Famous Artists Agency, a major New York City-based booking agency for hip hop and R&B groups.

One year later came the decision to move to South Florida, along with a phone call that led to his first entrance into the sport of which he’d always fondly admired.

“I cold-called Brad Jacobs in 1994 and told him I wanted to work in boxing,” recalls Kahn, himself an amateur boxing once upon a time. “I was 22 years old. He was running USA Tuesday Night Fights at the time. He spent an hour and a half on the phone with me and then opened doors for me after that call, starting with Hector Camacho's team. One thing led to another, and I was then hired to work on a Don King Productions show in Fort Lauderdale by a local promoter who was hired by Don.

“I ended up doing everything the local promoter was supposed to do and was subsequently hired as a full-time employee and then immediately sent to Las Vegas for Tyson-McNeeley. The journey began from there. August 1995.”

Nearly 25 years later, the journey led back to Kahn and Jacobs working together on a regular basis. Kahn’s current list of clients includes several signed with Top Rank Inc., for whom Jacobs serves as its chief operating officer.

“Brad is a good friend and still jokingly apologizes to this day for opening the door for me back then,” quips Kahn. “I always say if we were vampires, he'd basically be considered "my maker" and would have to release me if I ever wanted to leave this business.  I still seek his advice and respect the way he carries himself and manages his business dealings. He has always been humble and operates in a very mild-mannered way.  “Although, he's very succinct when it comes to expressing a yes or no... there's no bulls*** with Brad. I strongly feel that everyone in boxing respects him. I would be surprised to find one person that doesn't like or respect Brad Jacobs.”

Many have carried the same opinion of Kahn, even those he’s had to face in awkward courtroom battles. His working with Imam in a lengthy battle saw his own career come full circle.

Kahn’s early years were spent working some of King’s shows in South Florida when Don King Productions first relocated to Deerfield Beach, and hired as a full-time employee by August 1995. The move came just in time for Kahn to work former World heavyweight champion Mike Tyson’s first post-prison fight, with his 1st round disqualification win over Peter McNeeley generating huge business both at the box office at the MGM Grand in Las Vegas and revenue generated from the Showtime-distributed Pay-Per-View event.

“My favorite [boxing] memory would be more of an overall conscious understanding that I was working in boxing at a time that would be looked at historically as an important era,” Kahn notes of his rise through the ranks. “Being able to work with fighters such as Mike Tyson, Julio Cesar Chavez, Felix Trinidad, Terry Norris and so many others that were the big names in the sport at the time, I knew it was a special time.”

Of course, it wasn’t always the best of times—boxing never is, and in particular when dealing with King.

Among the many clients whom Kahn has represented includes former 130-pound champion Robert ‘Grandpa’ Garcia, who has since become and still serves as one of the sport’s top trainers. Kahn was among the DKP-employed managers whom King placed a lot of trust, though reciprocity wasn’t always a part of their relationship.

“My worst memory, although one of my favorite stories that I can laugh about in hindsight was when I was the co-manager for Garcia pre Muhammad Ali Reform Act, where you could actually still manage a fighter and work for a promoter,” Kahn recalls. “We were sitting in Don's office renegotiating Robert's contract and I went to use the bathroom with Robert's father Eduardo.  Upon coming back, Don locked me out of the office so I couldn't be in there with Robert, while I'm banging on the glass door and can see them in there and no one would let me in. I was then walked out of the very office I worked at.

“I wasn't fired. I was just removed from that scenario. It was a strange situation to say the least, but I learned a lot about life and leverage from that incident that has served me well.”

The manner in which Kahn always moves allows him to retain relationships even through the most troubling times—for example representing Imam in breaking free from King’s grasp, although with no hard feelings on the other side. It’s allowed him to serve as among the most respectable non-participants in the sport today, not an easy task in an industry which oh so easily creates enemies over the most minute of occurrences.

"Through it all, I am grateful for the opportunity Don King gave me and still speak to him to this day. I wouldn't have had the platform or have been exposed to the people at the highest level in the sport if it wasn't for platform he provided me early on." Kahn continued, "The rest is just business. Nothing personal at all."

Of course, it also took for Kahn to take an extended break from the sport, concentrating on his other passions. He continues to run Hardwired Marketing Group, the award-winning company he founded in 2008 which focuses on areas such as creative services, utilizing its network to connect clients in addition to brokering strategic partnerships and corporate sponsorship.

However, it was never intended to be a clean break, always keeping tabs on the sport he forever loved and knew to which he’d eventually return. All it took was for a sign to bring him back.

“Three years ago, I attended the BWAA dinner in New York, the night before [Gennadiy Golovkin versus Daniel Jacobs, March 2017],” recalls Kahn. “It was that night that I decided I was going to put my foot on the gas pedal and reinsert myself in a more prominent manner.

“I felt like the landscape of the sport was changing once again and boxing had regained market share it lost to the UFC and was thriving on a worldwide scale. It felt right and I committed myself to aggressively pursuing management.”

The return has come on his terms and—being recognized as among the best five managers in all of boxing for the past year—has proven successful thus far.

“What makes the nomination special is that it's voted on by the writers that cover the sport,” acknowledges Kahn, among the more media friendly figures in the sport. “The writers are truly vested in boxing and pushing the narrative of what is going on in the sport on a daily basis.

“For them to take notice is what makes it particularly special for me and I am truly grateful for the nomination, win or lose.”