Peter Fury: In His Next Fight, People Will See That Hughie Has Arrived!

Hughie was in action in March, when he knocked out Pavel Sour in three rounds.

The victory allowed Hughie to bounce back after suffering a twelve round decision loss to former world champion Alexander Povetkin in August 2019. Povetkin will return on August 22nd against Dillian Whyte. 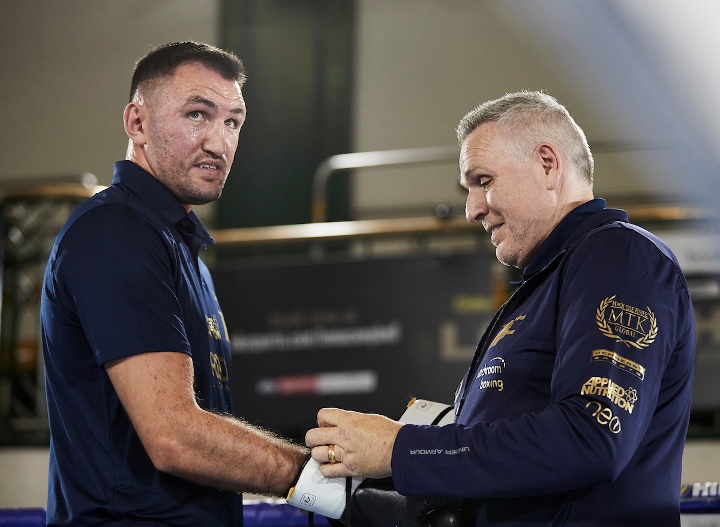 Hughie has only suffered defeats to world level fighters. He lost a twelve round majority decision in September 2017, when he challenged then unbeaten WBO world champion Joseph Parker.

His next loss came the following year, when he lost a twelve round decision to Kubrat Pulev in a world title eliminator. Hughie suffered a bad cut during the fight. Pulev is now challenging unified champion Anthony Joshua by year's end.

Peter Fury feels that his son began to showcase his true potential earlier this year, and his next fight will show everyone that he belongs on the same level with the very best in the division.

"We're hoping to see Hughie probably in November, early December. Hopefully he can get on one of the cards there and get in a good meaningful fight. He's training and we are just waiting on a date for Hughie," Peter Fury told Sky Sports.

"He's matured, he's a big heavyweight and he's hitting with a lot of power as well. We've got to look to the future for Hughie and I think in his next fight, people are going to wake up and see that he's finally arrived. I predict very big things for him."

[COLOR="Green"]I kind of feel bad for Hughie, almost impossible for him to escape the shadow of Tyson 2 Fast. Then again, he makes money doing what he loves. Can't feel sorry for a man that loves what he does. My…

[QUOTE=Jab jab boom;20699892]Cmon, Hughie belongs in the lane with the vastly inferior Brothers of superstar boxers along with the likes of [B]Bobby Pacquiao[/B], Jose Cotto, Ramon Alvarez, Rhaman Ali, etc. Give up the aspirations of being elite and accept your…

[QUOTE=SteveM;20699864]he is still young - at that age his cousin was still punching himself in the face[/QUOTE] Tyson duckked Whyte and so did Hughie years ago 😀