Pernell Whitaker - Could He Have Been Perfect Like Mayweather?

Several casual boxing fans reached out to me and asked the same question after news broke that Pernell Whitaker had been killed on Sunday night: “Was he THAT good?” Yes, he was that good.

Whitaker was similar to the more-familiar Floyd Mayweather, a defensive wizard who made even his best opponents look foolish and ultimately became known as the best boxer of his generation. And while “Sweet Pea” was hardly an action fighter – I found many of his fights to be boring because they were so predictable, like Mayweather – he also was formidable offensively, with a terrific right jab and quick, accurate shots that did plenty of damage over his career.

The results speak for themselves. Whitaker won six world titles in four weight divisions, dominating a long list of talented opponents – including fellow Hall of Famers Azumah Nelson and Buddy McGirt (twice) – along the way. And, like Mayweather after him, he was considered the No. 1 fighter in the world for a time.

Of course, Mayweather finished his career unbeaten at 50-0 (27 knockouts) while Whitaker (40-4-1, 17 KOs) tasted defeat. However, the two could’ve – should’ve? – shared perfection had disputed decisions and then substance abuse not marred Whitaker’s career.

Whitaker, a gold medalist on the legendary 1984 U.S. Olympic team, had a record of 40-2-1 after he lost a unanimous decision to young star Oscar De La Hoya but many believe strongly that he should’ve been 43-0.

A split-decision loss to Jose Luis Ramirez in 1988 in France – Whitaker’s first setback – is widely considered one of the worst decisions of the decade, as Whitaker seemed to dominate from beginning to end. Whitaker’s handlers claimed that promoter Don King and WBC President Jose Sulaiman fixed the fight to set up an all-Mexican showdown between Ramirez and Julio Cesar Chavez. An enraged Duva yelled at Sulaiman after the fight, “You’re a thief.”

Duva ultimately backed off, admitting he had no evidence of a fix after Sulaiman filed a slander suit, but we’re all left to wonder. And, for the record: Ramirez fought Chavez in his next fight. 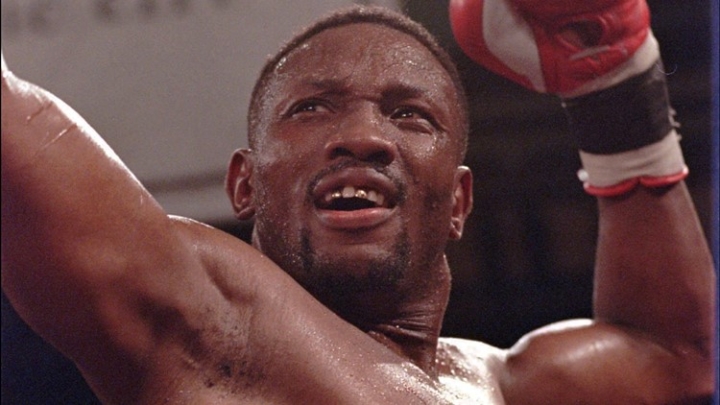 Then, in 1993, a showdown between then-unbeaten Chavez and Whitaker in San Antonio to determine the best fighter pound-for-pound also ended in controversy. Once again, Whitaker seemed to get the better of his Mexican opponent only to listen in astonishment as the ring announcer uttered the words “majority draw.”

The headline on the cover of the next Sports Illustrated screamed, “ROBBED!,” which echoed the sentiments of the vast majority of those who witnessed the fight.

In retrospect it seems clear that Whitaker was already in decline when, at 33 years old, he faced De La Hoya in 1997 in Las Vegas. Still, the gifted “Golden Boy” had to scratch and claw for everything he got in the toughest fight of career to that point and won by generous scores of 115-111, 116-110, 116-110.
Afterward, a familiar refrain reverberated across the Thomas & Mack Center: Whitaker was cheated. The Las Vegas Review-Journal conducted a poll of 26 boxing writers who were at ringside that night. Fourteen had Whitaker winning, 11 scored it for De La Hoya and one had it a draw.

I was one of the 11. I scored what I thought was a close fight 114-112 (seven rounds to five) for De La Hoya. Immediately afterward, a longtime colleague who had given the nod to Whitaker asked me as we walked to the post-fight press conference how I saw it and I told him. He called me a “homer,” a reference to the fact that both De La Hoya and grew up in Los Angeles. People are passionate about justice.

Whitaker already had a problem with alcohol and recreational drugs by the time he fought De La Hoya. He won his next fight, a close decision over Andrey Pestryaev, but the result was changed to a no-decision after Whitaker tested positive for cocaine and he was suspended for six months.

He made a comeback 16 months later but, a shell of the fighter he was, he lost a wide decision to Felix Trinidad. Another comeback, two years later, lasted one fight when Whitaker broke his clavicle against Carlos Bojorquez and he couldn’t go on.

I believe strongly that Whitaker, anywhere near 100 percent, could’ve outboxed Pestryaev and Trinidad with his eyes closed. The same with Bojorquez, who was leading on the cards when the fight was stopped in the fourth round.

I know. This is just one of countless what-if stories in boxing history. Whitaker definitely would have a better record if the judges in the Ramirez, Chavez and, possibly, De La Hoya fights done their jobs properly. The rest we don’t know.

We can only speculate what Whitaker might’ve accomplished had he not abused his body, which he can blame only on himself. And we don’t know whether a well-preserved, clean Whitaker would’ve continued fighting until naturally faded skills would result in one, two or more inevitable losses.

That said, I believe I know this: Whitaker had ability comparable to Mayweather, meaning he had the potential to finish his career with a perfect record or at least add substantially to an already remarkable legacy.

He was that good.

[QUOTE=IronDanHamza;19923801]So what? :lol1: Because you're wrong that's so what. Norris was not on the P4P list when Whitaker fought Vasquez. Vasquez was #1 at 154, not Norris. These are facts.[/QUOTE] I listed the years he was on the list I…

[QUOTE=jdp28tx;19923577]So what Norris was on the p4p list enough years for Whitaker to fight him and he never did. The fight should of been made. Ridiculous for Pea to climb to 154lbs and not fight the most well known, best…

[QUOTE=jdp28tx;19923633]Go back and look at all of Whitaker's interviews when asked who he wants to fight and never once did he mention Terry Norris. On the other hand there is plenty of video interviews with Terry calling out Whitaker on…

[QUOTE=jdp28tx;19923557]I just looked it up and you are wrong. I listed it, you just see what you want to see. Interviews given at the time by Duva. If you want me to prove you wrong yet again I will, its…