Jose Pedraza and Javier Molina both aim for a second straight Vegas win.

The pair of 2008 Olympians and junior welterweight hopefuls made weight for their scheduled 10-round contest, which streams live Saturday evening on ESPN+ from The Bubble at MGM Grand in Las Vegas, Nevada. Pedraza checked in at 141.5 pounds, while Molina weighed 141.7 pounds.

Pedraza (27-3, 13KOs) makes his third trip to The Bubble, though for just his second fight. The former two-division titlist from Cidra, Puerto Rico had to wait out a two-week delay in order for a clash with Mikkel LesPierre to see the light of day, having weighed in for their planned June 18 ring date LesPierre’s manager to test positive for COVID-19 which forced the entire team off site. 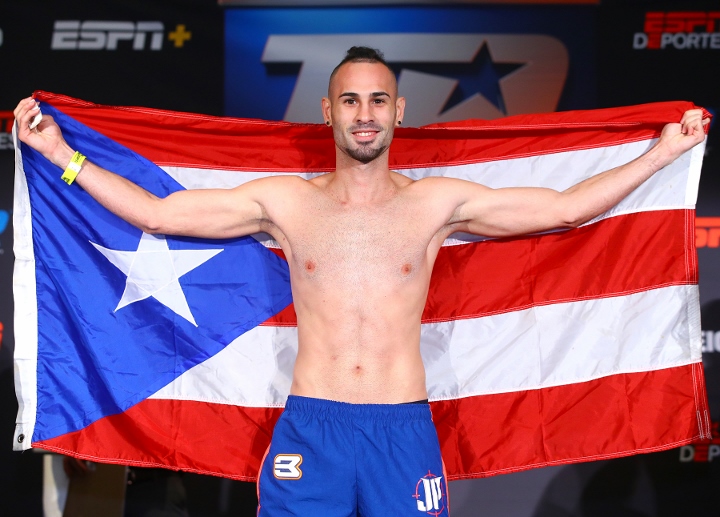 Their bout was rescheduled for July 2, with Pedraza taking a landslide unanimous decision for his first win at the weight. The 31-year old Boricua came up well short in his 140-pound debut, dropping a 10-round decision to Jose Zepeda last September at the MGM Grand Garden Arena.

Molina (22-2, 9KOs) comes in carrying a five-fight win streak. The 30-year old from Norwalk, California picked up arguably the most significant career victory in his most recent bout, a decisive eight-round points win over former title challenger Amir Imam this past February, also in the main room at MGM Grand.

Ajagba (13-0, 11KOs)—a 2016 Nigerian Olympian now based out of the greater Houston area—tipped the scale at 242.3 pounds, roughly the same as his weight in a 9th round stoppage of Razvan Cojanu in his most recent bout this past March at Barclays Center in Brooklyn, New York. Rice weighed 265.4 pounds, well below the career-high 283 ¼ pounds he posted in a 10th round knockout loss to unbeaten Demsey McKean this past March in Queensland, Australia.

Two-time Olympic Gold medalist Robeisy Ramirez makes his third Bubble appearance, as the 26-year old Miami-based Cuban export faces Felix Caraballo, who fights for the second time in this venue as they collide in an eight-round featherweight contest.

A third straight win in this venue is sought for Ramirez, who scored a 1st round knockout of Yeuri Andjujar in June and a six-round decision over Adan Gonzales in July. The latter win avenged his lone career defeat, which came in his pro debut last August in Philadelphia, Pennsylvania.

Caraballo appeared on the B-side of the marquee for the first-ever Bubble show, though hardly a memorable occasion as the 33-year old from Mayaguez, Puerto Rico was stopped in the 6th round of his June 9 clash with Shakur Stevenson who moved up to junior welterweight and subsequently abandoned his featherweight title reign soon thereafter. Caraballo has since returned to the featherweight division, where he has cma