Pedraza: Life In The Bubble Easier For Me This Time Around

For the second time in less than two weeks, Jose Pedraza is ready to experience life in ‘The Bubble.’

The 31-year old Puerto Rican southpaw returns to Las Vegas, barely 10 days after having to depart town without an official fight to show for his troubles. He was due to face Brooklyn’s Mikkel LesPierre (22-1-1, 14KOs) in a junior welterweight matchup atop a June 18 ESPN card live from MGM Grand Conference Center, only for the bout to get scrapped due to LesPierre’s manager, Jose Taveras testing positive for coronavirus which forced their entire team off of the show.

The bout has since been rescheduled to take place July 2 at the very same venue and with all of the same testing protocols in place.

“Well, here I am again,” Pedraza (26-1, 13KOs) joked to BoxingScene.com on Monday, shortly after returning on site. “But I feel good. I hope that everything goes well. I feel great, I’m prepared for this fight.” 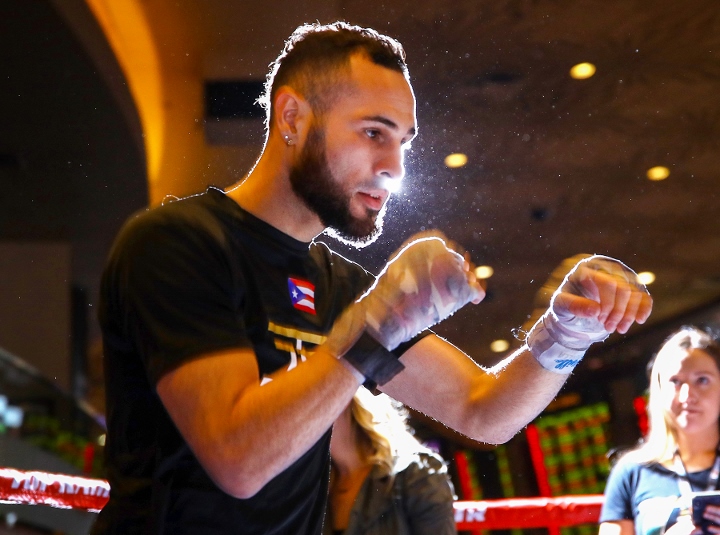 Both boxers went through the trouble of making weight last time around, only to learn of their bout cancellation less than 24 hours later on the morning of the fight. Pedraza—a former titlist at 130- and 135-pounds—didn’t learn of the scrapped plans until waking up that morning and hearing about it after talking to his wife about it over the phone.

The silver lining is that what was once a unique—if not uncomfortable—experience for both fighters now comes without any of the shock value still in place.

All participants are mandated to submit to coronavirus testing immediately upon site arrival, as they are immediately isolated in a room while awaiting test results. Once cleared, they are then permitted entrance into the secured MGM property known as ‘The Bubble’, where they are required to remain otherwise will have to once again submit to testing in order to gain reentry in the sterilized area.

It's a process with which Pedraza had to refamiliarize himself with, though a welcomed sacrifice he's willing to make in order to finally make his way to the ring.

“Life in The Bubble is easier for me this time around. I experienced the whole process of checking in and all that,” notes Pedraza, who hasn't fought since a 10-round loss to Jose Zepeda last September. “It’s a safe environment that Top Rank put together for all of the fighters. In a lot of ways it’s better than normal fight week. You don’t have to go to the lobby and wait to check in. Just straight to the room and the testing.

“This time around I know what to expect. But really, it’s not different from what I do during fight week. I tend to stay in my room the whole time.”

Of course, nobody expected the outcome of their previous failed effort to get in the ring. Through no fault of other boxer, both missed out on a mid-June payday although they are now presented a second-chance opportunity to right that wrong.

“I hope that everything goes well for [LesPierre] and me so that we can have a fight on Thursday,” admits Pedraza. “I know I’m ready to fight this Thursday. I haven't fought since last September. I don't want to experience this long of an inactive stretch ever again.”