Chances are, Jose Pedraza will check in at a career-heaviest weight for the second time in two weeks.

It’s not because the two-division titlist from Cidra, Puerto Rico is out of shape. Quite the opposite, in fact, as he braces for a rescheduled July 2 clash versus former junior welterweight title challenger Mikkel LesPierre (22-1-1, 14KOs).

The bout will top the July 2 edition of Top Rank Boxing on ESPN, live from MGM Grand Conference Center in Las Vegas and take place at a 144-pound catchweight. It comes as a make-up call for their quick turnaround from their previously scheduled June 18, as a concession to allow Brooklyn’s LesPierre to not allow a second-chance payday slip through the cracks.

“To me it doesn’t matter whether I fight at 140, 141 or 144,” Pedraza (26-1, 13KOs) admitted to BoxingScene.com of the modified limit. “This [rescheduled] fight was actually made at 144. It was a request from his side, otherwise they wouldn’t have been able to fight this soon.

“It was fine with me. I’m ready to fight and will be ready on Thursday. It probably benefits me a little. I won’t have to sacrifice as much to make the weight. I will be very comfortable making weight and expect to weigh about 150 on fight night. It’s a perfect weight for me.” 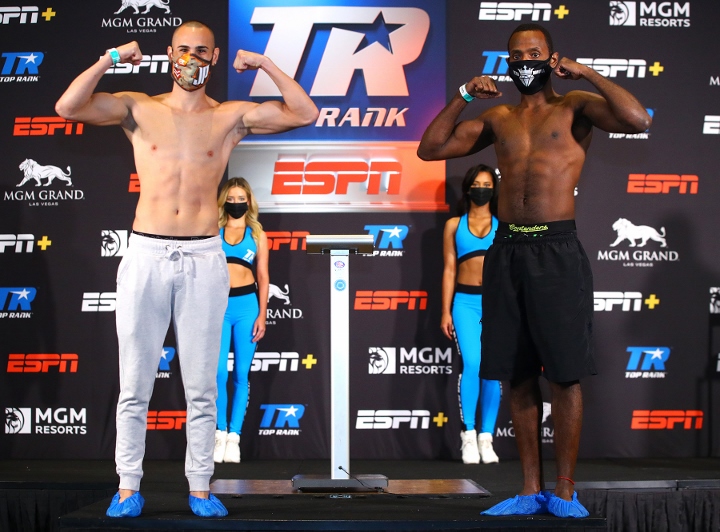 The bout will mark the second straight at a new weight for Pedraza (26-1, 13KOs), who’s previously campaigned and has won titles at 130- and 135-pounds. The 31-year old southpaw moved up to the 140-pound division last September, albeit in a 10-round loss to Jose Zepeda.

Pedraza has since spent most of the past near-10 months attempting to move past that defeat, with Thursday marking the third such effort. He was due to return in May, only for those plans to be scrapped due to the ongoing coronavirus pandemic.

The same disease was the direct cause for the June 18 fight between Pedraza and LesPierre not seeing the light of day, this time getting canceled on the day of the contest. LesPierre was forced off of the show after his manager, Jose Taveras tested positive for COVID. At the time, testing protocol called for the boxer and his entire team to be removed from “The Bubble”—the secured area on the Las Vegas site—even if just one person tests positive.

That policy has since been modified to give clean and healthy boxers a fighting chance to make their way to the ring, as long as they test negative which at the time was the case for Pedraza and LesPierre. Both had also already made weight for the scheduled fight, with Pedraza checking in at a career-heaviest but in-shape 140.4 pounds.

Hours after his fight was canceled, the Puerto Rican boxer continued to work out on site. He did as much once he returned home, even with the quick turnaround back to Las Vegas.

“Basically, I spent time with my family and I kept training,” noted Pedraza. “Even the day of the fight in the arena I was still training. I had a gym teammate fighting on the same card (Frevian Gonzalez, who won a four-round decision).

“When I went home, I wasn’t expecting to be rescheduled so quickly. The fight was mentioned to take place July 14. But they told us we’d be fighting July 2 and at this new weight, and I was fine with that. I kept in shape and I’m ready for this opportunity.”

Hope this not backfire to Jose Pedraza, still think he win, but also is depending the Jose Pedraza that appear in the ring, because he lost focus of his boxing and begin to slug, something that I still wonder why.…

[QUOTE=Griever0730;20635603]He should as he's the much better boxer. Just hoping the weight isn't as big factor being that he wasn't successful against Zepeda in his first fight moving up & he wasn't a big puncher in the lower divisions already.[/QUOTE]…

[QUOTE=Citizen Koba;20635385]Da fuq? Ummm. Can't help thinking this benefits Mikkel a bit, and with Pedraza coming off the L? Jose [I]should[/I] still be able to win pretty handily but it's definitely a factor.[/QUOTE] He should as he's the much better…

Da fuq? Ummm. Can't help thinking this benefits Mikkel a bit, and with Pedraza coming off the L? Jose [I]should[/I] still be able to win pretty handily but it's definitely a factor.