Leben started strong, he was game, but faded down the stretch and gassed as Cochrane, who took this fight on late notice, was able to outowork and outland the favorite.

They came out swinging big punches from the start, with Bedford dropping Barnett hard with a counter hook. They continued to trade with Bedford securing a second knockdown. Bedford went for the finish, with Barnett fighting him off and using clinches to get out of trouble.

In a battle of MMA veterans at 165, Julian Lane held off a late rally to win a five round unanimous decision over Tom Shoaff.

Lane came out with a lot of pressure and dropped Shoaff in the first round. The second was a bit better for Shoaff, but he still got rocked by a series of shots.

Lane had the edge in the third and fourth, but he faded bad at the end of the fifth and he was in real trouble when the contest ended.

In a heavyweight contest, Joey Beltran knocked out Jamie Campbell in two rounds.

Beltran let his hands go in the second round. He dropped Campbell with a series of punches. Campbell barely got back to his feet and was pummeled with more shots for another knockdown, and the contest was waved off when he couldn't beat the count.

Longtime MMA veteran Joe Riggs, who is undefeated in bare knuckle competition, had to get off the floor to come away with a five round draw with Tampa's Walber Barros in a 185-pound fight.

In the third round, Barros clipped Riggs and dropped him hard in the closing seconds. Another punch created a cut above the left eye of Riggs. Time ran out in the round before Barros could finish.

In the fourth, Riggs split the left eye of Barros wide open. Barros' vision was affected by the cut and he took punishment.

Riggs appeared to do enough to win the fight, but all three judges scored it 47-47.

UFC veteran Jim Alers of Orlando crushed Pensacola's Elvin Brito with one big uppercut in the first round, in a 165-pound attraction.

The shot sent Brito crashing to the mat, out cold. Alers had previously stopped Brito in an MMA bout in 2017.

Florida's David Mundell blew out Oklahoma's Drew Lipton in the first round of an 185-pound contest. Mundell came out swinging hard to secure a knockdown, and then closed the show with a big right to the temple that sent Lipton down and out.

In a lightweight brawl, where both fighters were cut, Tampa's Abdiel "The Nightmare" Velazquez ws able to bounce back from a loss, by winning a five round unanimous decision over Pennsylvania's Travis Thompson.

In a 165-pound bout, with two MMA fighters making their bare knuckle debut, Chris Boffil got off the floor to stop fellow Floridian Jared Hayes in the third round.

Hayes hurt and dropped Boffil near the end of the second with a left-right combination. But then Boffil stunned Hayes before the round closed out.

In the third, Boffil badly hurt Hayes with a shot that opened up the left eye. Bofil then battered Hayes with punches, scoring two knockdowns before the contest was waved off. 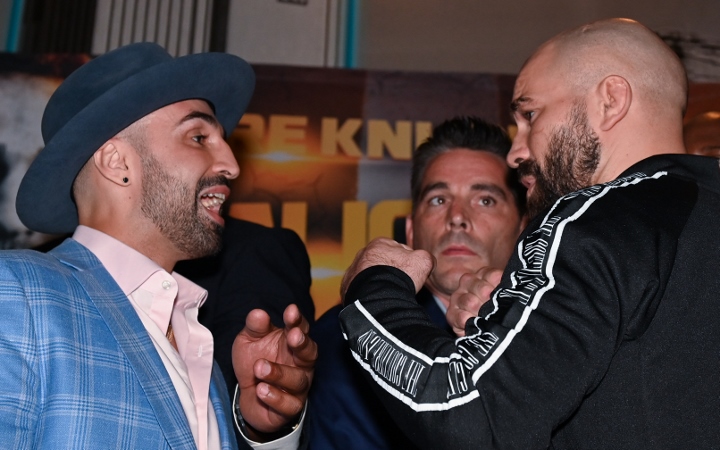 Boxing got hit with a huge low blow thanks to Paulie Malignaggi.:hitit:

[QUOTE=eco1;19851244]and even then he won. He hit the guy a lot and got hit a couple of times. F that sport anyway.[/QUOTE] I like it, I think boxers with power could make it really exciting.

5 two minutes rounds is a joke. Women's boxing is more grueling than that.

and even then he won. He hit the guy a lot and got hit a couple of times. F that sport anyway.