Paulie Malignaggi: I Will Beat The Sh-t Out Of McGregor If He Tries Me

The infamous sparring session between Conor McGregor and Paulie Malignaggi, and the leaked footage and following war of words between the two fighters thereafter, created a firestorm among combat sports circles ahead of McGregor’s boxing debut against Floyd Mayweather in 2017.

Malignaggi, who was a training camp partner of McGregor’s at the time, did not appreciate the one-sided video edit that was produced and released shortly thereafter by McGregor’s team, including a knockdown from a camera angle in which he claimed it was a push.

Malignaggi, a former two-division champion at 140 and 147 last fought as a boxer in 2017 and finished his career 36-8, 7 KOs. He also dropped a disputed decision to McGregor disciple Artem Lobov last year in the Bare Knuckle Fighting Championship.

But the 39-year-old Malignaggi is willing to call off semi-retirement and put an end to McGregor’s claims once and for all for the public to see.

“We both know what I did to him in the gym that day in 2017,” Malignaggi told BoxingScene.com in an interview. “The Conor McGregor fight always interests me. I will gladly do winner takes all the money in that fight. I will put my finances at risk because it will be a pleasure to beat that guy up. There would be a lot of money in the pot. I would rather let the winner take it all. He’s dragged my name too much in the mud. He knows he will get the sh-t beat out of him if he tries me. Him and I both know that. He gets stopped, 100 percent, no doubt about. He can’t last the distance in a boxing match.

“He’d rather fight guys like Donald Cerrone who are half dead going into the cage. People argue that I’m not a big enough name for McGregor. Cerrone is definitely half the name that I am, and that’s no shot at him, because he’s done a lot in his MMA career. I’m a bigger fighter than Cerrone.” 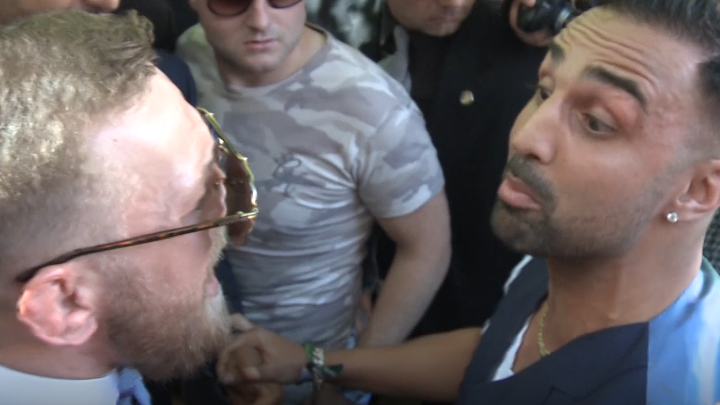 McGregor made countless remarks during the Cerrone promotion in January that he’d entertain the idea of yet another boxing match.

Malignaggi considers himself as the most realistic and marketable opponent for the Irishman.

“A Floyd Mayweather rematch is not a realistic fight for McGregor because it doesn’t appear Mayweather is interested in fighting. I think Manny Pacquiao obliterates McGregor in one round,” said Malignaggi. “McGregor will have advantages of bringing money to the table, but I think he values his name. If he’s going to fight either of us in a boxing match, he’ll be exposed. He quit during his submission losses in MMA. As soon as it gets hard for him. He looks for the first way out. He’s the king of ‘perception is reality.’ In boxing, he’s going to taint his name because there aren’t too many ways out of a fight. He basically quit against Mayweather and stopped throwing punches. He was in shape. I was in camp with him. He was looking for a way out of that fight.”

Malignaggi, now a Boxing analyst for Showtime, said he believes McGregor's one-sided portrayal of their sparring session was a marketing ploy to make fans believe he had a shot at beating Mayweather.

“He had to sell an angle and a few extra pay per views and he needed to make it look like he had a chance in that fight,” said Malignaggi. “Everyone knew he didn’t have a chance to win that fight. It was just a bunch of kiss-asses telling him what he wanted to hear.”

Conor would have a good shot at beating Paulie in an actual boxing match at this point.

ill never forget the way mcgregpr snapped your head back. Pauli looked scared as **** fighting mcgregar(sparring). This is for publicity at this point

[QUOTE=Roberto Vasquez;20545177]What if he loses though? Paulie is a much better boxer than McGregor and McGregor has no power with cushioned-gloves on.[/QUOTE] Then we don’t have to hear about him boxing anymore. Win-win for us fans. Either he gets exposed…

[QUOTE=TheMyspaceDayz;20542343]The point of the fight would be that people will pay for the next McGregor fight.[/QUOTE] What if he loses though? Paulie is a much better boxer than McGregor and McGregor has no power with cushioned-gloves on.

[QUOTE=BIGPOPPAPUMP;20541606]The infamous sparring session between Conor McGregor and Paulie Malignaggi, and the leaked footage and following war of words between the two fighters thereafter, created a firestorm among combat sports circles ahead of McGregor's boxing debut against Floyd Mayweather in…