Parker's Manager: There is 'Utter Disarray' in Chisora's Camp

David Higgins, manager of former WBO heavyweight champion Joseph Parker, believes there could be a lot of turmoil in the Derek Chisora training camp.

Parker and Chisora are scheduled to collide on October 26th, as part of the junior welterweight unification clash between Regis Prograis and Josh Taylor.

It was revealed at their recent press conference that Chisora had parted ways with head trainer David Coldwell. Chisora and Coldwell were having success, with the London heavyweight demolishing Artur Szpilka in July. 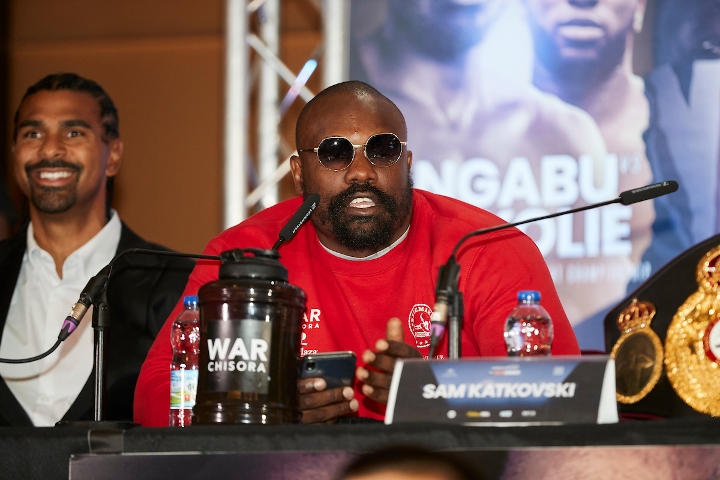 At this point Higgins is wondering if former world champion David Haye, who manages Chisora, will also play the role of trainer come fight night.

Higgins told Sky Sports: "I'm assuming David Haye is the trainer, because no-one knows? I tell you what, their mental state is 10 times worse than mine, and that's saying something. It's plain sailing for Parker in Vegas, it's utter disarray with Chisora in London, however, he remains dangerous.

"He's been in disarray before and pulled a rabbit out of a hat, so we don't underestimate Derek Chisora, or his camp at all, not one bit. We take them very seriously, in fact, it's a cracker of a fight. Might be one of the best heavyweight fights of the year at The O2 Arena. We're serious, but Joseph at his best should beat Chisora."

Higgins cautions that Parker will not fall for any of Chisora's mind games. During their press conference, Chisora threatened to withdraw from the bout - because he was angered that his contest was being placed in the co-featured position on the card.

"They can try all the mind games they want, but it might even strengthen Parker," said Higgins. "It doesn't work on Parker, the mind games. Joe will probably laugh at him, I reckon. I loved the performance at the last press conference."

[QUOTE=Jkp;20077360]Lol. settle down Sick knee. Everyone on here knows your a weirdo AJ fanboy #1.[/QUOTE] Anybody who reads your creepy nonsense knows who the weirdo is. Mlac is just bitter after I exposed him as a poisonous Scot. You should…

[QUOTE=Jkp;20077351]You were off the forum for weeks after AJ got destroyed by the obese mexican. Rumours were swirling that your tears of humiliation short circuited the keyboard everytime you tried to use the computer.[/QUOTE] I was on the same night…

[QUOTE=Sid-Knee;20077235]Is this serious? JKP posts nothing but bile towards AJ, Hearn and Whyte after they beat Parker after he said Parker was going to smoke them. He's been emotionally damaged. Have you even read his posts? He doesn't talk about…

[QUOTE=Sid-Knee;20077213]What have my AJ predictions got to do with your poisonous comments about Chisora being on PED's? If we're adding in getting predictions wrong, then you'd be one of the worst on here. Then you can add in the poison…

[QUOTE=mlac;20073334]lol. the only weirdo nutjob is you. Serious question, why do you come on here? do you even like boxing? all you do is turbopost about nationalistic crap, oh look you are predicting the UK boxer to win! wow who…

ADD COMMENT VIEW COMMENTS (15)
Advertisement
Top Headlines Ennis: Extra Weight Won’t Matter For Abreu; I'll Go In There & Get The Stoppage Pedraza: As I Keep Moving Forward, Fights Will Keep Getting Tougher And Tougher Alex Saucedo vs. Arnold Barboza Jr. To Co-Headline Lomachenko-Lopez On 10/17 Erickson Lubin: You Could See How Much I've Changed Since The Charlo Fight Jaron Ennis: I Might Have To Get Into A Mandatory Position To Get A Title Shot Ajagba: Time Away From Ring Was Frustrating, Hurts To Not Be Able To Do Something You Love Nyambayar: I Had A Sprained Ankle Against Gary Russell; I'd Love A Rematch Lubin: I'm Fresher, Hungrier Than Lara & Trout; Looking To Make Statement Against Gausha Pedraza: I Think Lomachenko Will Dominate Lopez, But He Can't Get Reckless Daily Bread Mailbag: Charlo Brothers, Ennis, Canelo, Spinks, More BoxingScene.com's Television Pick of The Week - September 19 McKenna: Beating Ohara Davies Will Be Highlight of My Career Joe Joyce: We'll See if Dubois Can Take My Heavy, Powerful Shots! Frank Warren: Whyte Received Shorter Medical Suspension Than Spelman? Francis Chua Aims To Fight, Looks To Kambosos, NG, MacKenzie Boxing Facing Financial Adjustments Johnny Nelson Confident Whyte Would Have Benefited With Tibbs in Corner Vijender Singh Hopes To Resume Career Before Year is Over Josh Taylor Must Remain Focused on Khongsong, Says Ben Davison Javier Molina: Pedraza Looked Good With LesPierre - I'm No LesPierre! Amir Khan Appointed as President of WBC Middle East Boxing Council Ajagba vs. Rice, Ramirez vs. Caraballo - Ready To Fight Jose Pedraza, Javier Molina - Set For Showdown in Las Vegas Pedraza-Molina ESPN+ Weigh-In Report From The Bubble Ennis vs. Abreu, Nyambayar vs. Breedy - Set For Bouts Erickson Lubin, Terrell Gausha - Ready For WBC Eliminator Haven Brady Jr. Inks Promotional With Top Rank Crawford vs. Brook Negotiations at Advanced Stage For November 14 Zhang Zhilei Inks Promotional Pact With Eddie Hearn Juan Carlos Abreu Comes In 3-Plus Pounds Overweight For Jaron Ennis Fight Rene Tellez-Giron Return Pushed Back Due To COVID-19 Terrell Gausha: I Was Nervous That I Wouldn't Get This Fight Again Teofimo Lopez: Lomachenko Is On His Way Out, I'm Looking Through Him Jermell Charlo: I Don't Want Judges To Make Decision For Me Against Rosario Hearn on Yarde-Buatsi: It's a Massive Box Office Fight at The O2 Abreu: Either Jaron Ennis Knocks Me Out Or I Will Knock Him Out Bilal Fawaz Inks Agreement With MTK Global Lewis Ritson Vows To Fight His Way To a WBA Title Shot Fury vs. Joshua: Hearn Says Deal On The Verge of Being Put on Paper Graveyard Shifts At Warehouse Motivated Molina To Turn Around Boxing Career
Advertisement
Latest Boxing Videos 'The Journey - Charlo Doubleheader' 30 Minute Special Showtime Releases Trailer For Documentary 'Ringside' Charles Martin Reacts To Helenius Stopping Kownacki Robert Helenius Reacts To Shocking TKO of Kownacki Adam Kownacki Reacts To TKO Defeat To Helenius Joseph Parker Reflects on Fury-Wilder, Talks Return Mikey Garcia Reflects on Fury-Wilder, Talks Vargas Eddie Hearn Reflects on Fury Stopping Wilder, More Kenny Porter Reacts To Tyson Fury Stopping Wilder Jose Ramirez Reacts To Tyson Fury Stopping Wilder
Recent Top Stories Graveyard Shifts At Warehouse Motivated Molina To Turn Around Boxing Career Erickson Lubin vs. Terrell Gausha: The Play-In Derevyanchenko Vows: I'm Ready For Everything in Charlo Fight Remembering "The Showdown" – Still a Thrill After 39 Years
Advertisement
Latest Forum Threads
Advertisement
Advertisement
This website may contain adult language.
TM & © 2020 BoxingScene. All Rights Reserved.