Parker Warns Fa: You Should Have Faced Me on Last Date, Now I'll Be Way Better

The fight was pushed back to February 27, after Fa underwent surgery an undisclosed medical issue. Fa and his handlers felt it was best to keep the medical issue a secret to avoid a scenario of Parker gaining an advantage with the information.

Parker revealed that he himself was injured and banged up during that training camp, but still intended to move forward with their contest at less than 100%.

Once the fight was officially postponed, Parker decided to have surgery on both of his elbows. 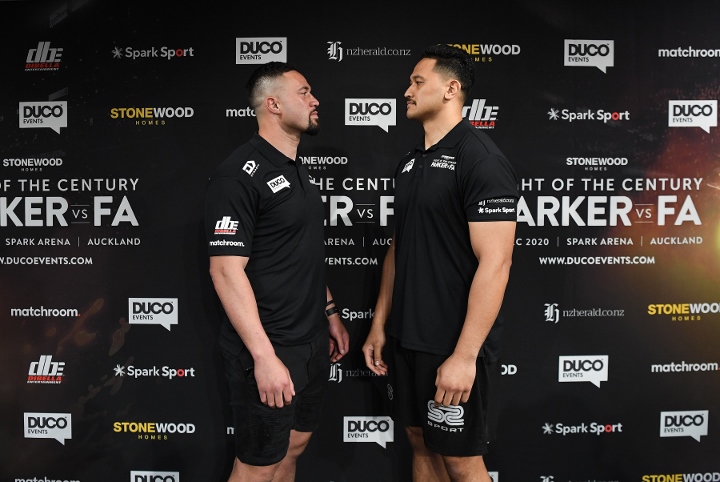 Parker expects to be a lot stronger and overall better in February.

"They should have taken me on [on the original date] because I was training with injuries," Parker said.

"By February 27 I'm gonna be way better. Stronger, faster, no injuries and no problems."

Parker explained that his elbows were operated on back in 2018, in the months leading up to his unification with Anthony Joshua, who handed the Kiwi fighter his first career defeat. Both surgeries were done to remove bone fragments.

He intends to start training camp in the coming weeks.

"The first surgery was very successful but over time with everything we're doing - throwing a lot of punches, doing a lot of weights, more bone keeps growing. It's not easy to train with injuries and pain," Parker said.

"With sparring there was a lot of inflammation, swelling but with the surgery that I had it will be all cleared. I'm not able to punch yet - I'll probably be able to punch in the first week of January when we start camp."

[QUOTE=Sangy;20975045]Honestly, Parker should've beaten Joshua and he absolutely beat Dillian Whyte. Both men cheated enough that any reputable official would've disqualified them. But since the only job of a British ref seems to be securing wins for British fighters, he…

Honestly, Parker should've beaten Joshua and he absolutely beat Dillian Whyte. Both men cheated enough that any reputable official would've disqualified them. But since the only job of a British ref seems to be securing wins for British fighters, he…

I hope Parker can step up the competition after he beats Fa. He needs to get back on track to a world title opportunity.

I agree with your point of view. I see Parker stopping Fa at around round 6.

I have seen most of Fa’s fights & all of Parker’s fights. I know Fa was down against a 45 year old Dominick Guinn & that was one of the few fights I missed so I’m not sure if he…