Joseph Parker (27-2) was understandably frustrated when his December 11th showdown against domestic rival Junior Fa (19-0) was postponed due to Fa needing to have a medical procedure performed. The highly anticipated clash of New Zealand heavyweights was scheduled to take place at the Spark Arena in Auckland.

However, he was able to use the additional time to take care of a nagging injury of his own.  When Fa pulled out of the fight, Parker decided to have surgery on bone chips in both of his elbows.  Keyhole surgery was performed twice in the first week of December and now Parker is able to punch without pain. 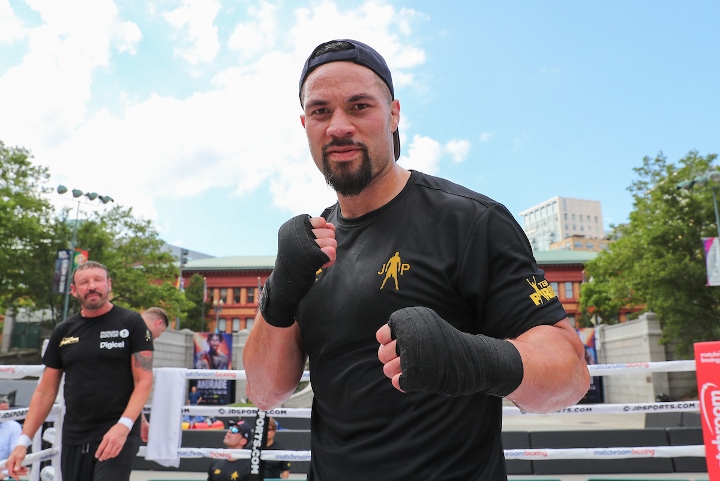 The fight is now rescheduled for February 27th at the same venue.  Parker and his trainer Kevin Barry began their 8 week training camp this week and Barry said that he has already noticed a difference.

"Joe is noticeably more comfortable in his training and his right hand is firing straight and hard," Barry told BoxingScene.com. "The postponement of this fight worked to our advantage as Joe was going to fight Fa even with the elbow issues."

Barry now expects Parker, who is ranked #3 by the WBO to put on an even more spectacular performance against the #6 ranked Fa when they meet in the ring.

The long time rivals fought 4 times in the amateur ranks with both men winning 2 fights a piece.

“Now I’m seeing a higher work rate in the boxing gym training sessions and Joe is determined to begin 2021 in a devastating fashion. We will work again on our game plan for Fa and do skill set work for the first 2 weeks of camp before introducing 5 weeks of sparring and tapering off over the week leading up to the fight,” said Barry.

The winner of this WBO #3 and WBO #6 clash will be in a strong position to move to the WBO’s #2 spot behind the mandatory challenger Oleksandr Usyk.

He had elbow surgery prior to the AJ fight as well, double elbow surgery, TWICE, this guys body is breaking down mark my words.

He has all the tools this kid, he just doesn't know how to use them.

Maybe this will get him throwing more punches. Hopefully we see Parker make one more run & it starts with demolishing Fa within a few rounds like Tua did to Cameron.

The winner will not get a shot at the title any time soon. Usuck in the #1 mando spot is screwing everything up. Usuck loses to Joyce, Parker and AJ. Usuck will step aside and wait in line to lose…

[QUOTE=PBR Streetgang;21008775]I like Parker too but he frustrates me because I see so much potential but sometimes he seems to hold back in fights. It's like he's content to do just enough to win or in some cases lose without…