Parker: I Know I Can Beat Ruiz A Lot Clearer If We Have Rematch

If Ruiz does defeat Joshua in their immediate rematch, Parker “would love” to secure his own second fight with Ruiz. New Zealand’s Parker is the only opponent who has beaten Ruiz, thus he figures the newly crowned heavyweight champion would want a chance to avenge that points loss.

“If he beats Joshua in the rematch, I would love to have a rematch with Andy,” Parker told BoxingScene.com. “I respect Andy as a fighter. And now I respect him as a unified champion. He worked hard with his team to get to where he is, and he deserves all the attention he has received. But if I got the chance for a rematch, I would love to fight him again. He’s a fighter I respect, but I know I can beat him and I know I can beat him a lot clearer than I did in 2016. We’re both different fighters now, so it’d be awesome if I could get a rematch and get in the ring with him again.” 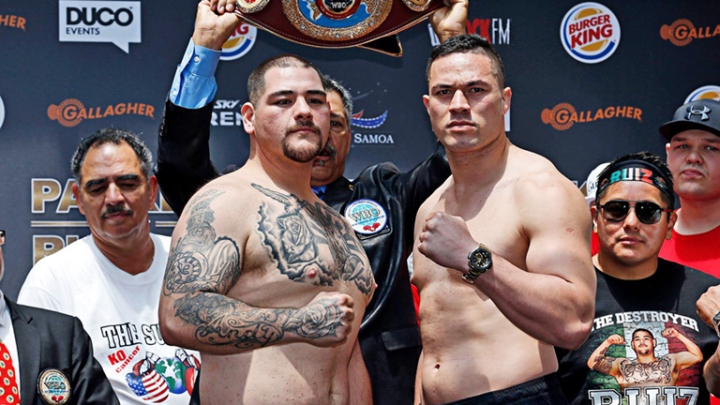 Parker (25-2, 19 KOs) will get in the ring Saturday night with Australia’s Alex Leapai (32-7-4, 26 KOs), a late replacement for American veteran Eric Molina (27-5, 19 KOs). The 12-round bout between Parker and Leapai will be part of the Demetrius Andrade-Maciej Sulecki undercard at Dunkin Donuts Center in Providence, Rhode Island (DAZN).

The 27-year-old Parker has lost two 12-round unanimous decisions – to Joshua and Dillian Whyte – since he edged Ruiz by majority decision in December 2016. Ruiz believes he deserved the decision over Parker, but two judges scored that 12-round fight for Parker by the same score, 115-113, and one judge scored it even (114-114) in Parker’s native New Zealand.

For now, Ruiz is focused on a second meeting with England’s Joshua, whom Ruiz knocked down four times on his way to a stunning upset June 1 at Madison Square Garden in New York.

Having boxed both of them, Parker was one of the few onlookers that wasn’t completely taken aback by Ruiz’s upset earlier this month.

“I wasn’t surprised that he beat him, but I was surprised in the way he beat him,” Parker said. “I knew before the fight that Ruiz had the ability to put on a great performance, that he had the ability to win. But I didn’t think he would win the way he did. He won in great fashion. That’s why there’s a lot of talk about him around the world, because he put on a dominant and great performance. Even though he got knocked down, he showed a lot of heart to get back on his feet and give Joshua a lot of trouble, and then obviously got him out of there.”

Ruiz (33-1, 22 KOs) and Joshua (22-1, 21 KOs) are expected to fight again either in November or December at a stadium somewhere in the United Kingdom. Despite Ruiz’s impressive performance in their first fight, Parker isn’t sure who will win their rematch.

Will Ruiz face Spider Parker tho ?

Ruiz don't need to give him a shot, when he won his belt he could have ran it back with Ruiz then but didn't.

Parker, you won`t get a shot. If Andy beats Joshua again, he will fight Wilder or mandatory challengers.

Parker knew he got a gift in his backyard. He was so "confident" that he NEVER mentioned a rematch one time until Ruiz snatched 3 belts. Now that Ruiz is in a better situation Parker wants a rematch...SMH. Where was…