Pacquiao: Thurman Is Heavy-Handed, He Hit Me Like Margarito

LAS VEGAS – Keith Thurman came to a post-fight press conference late Saturday night looking like he had been beaten up.

The former WBA welterweight champion’s face was bruised, marked up and swollen following his grueling fight with Manny Pacquiao. He was knocked down during the first round, bled badly from his nose in the fifth round and withstood a painful body shot in 10th round.

Pacquiao looked better, but he made it clear that he, too, had been brutalized on his way to winning a split decision at MGM Grand Garden Arena. The newly crowned champion revealed that he hasn’t been hit as hard as Thurman hit him since he fought Antonio Margarito in November 2010. 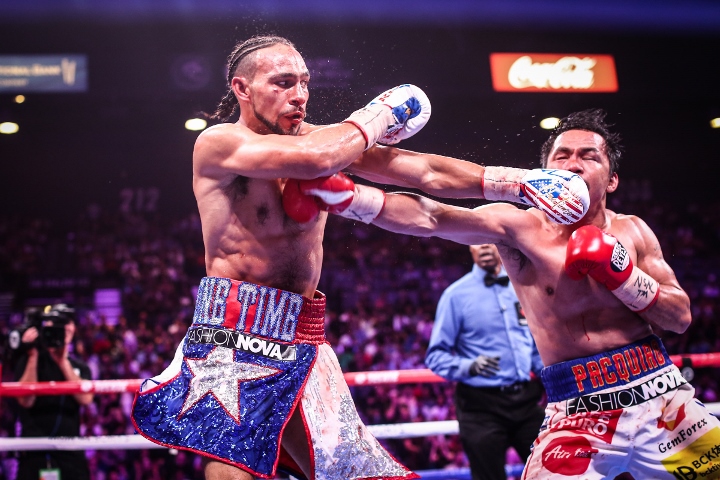 Pacquaio particularly was impressed by Thurman’s willingness to trade with him and his opponent’s obvious fighting spirit.

“This guy is a warrior,” Pacquiao said. “I can say that because I’ve fought a lot of opponents and this guy is heavy-handed, man. It’s the kind of opponent you cannot underestimate.”

Pacquiao (62-7-2, 39 KOs) has fought 11 different foes since he out-pointed Margarito to win the then-vacant WBC super welterweight title. Juan Manuel Marquez knocked Pacquiao unconscious in December 2012, yet he can’t remember someone hitting him harder than Thurman (29-1, 22 KOs, 1 NC) since he met Margarito.

“Keith hits like Margarito,” Pacquiao said. “Margarito’s heavy-handed, but I think it’s because he was too big for me. So, that’s why I feel like [Margarito’s] heavy-handed.”

I score a fight based on the Marques of Queensbury rules. Effective aggression, ring generalship, and round by round basis. You don't get 15 points for a knockdown you score 1 single extra point which could have given Pac man…

[QUOTE=Boxing Goat;19934261]Stfu, your brain is a brick :dunce:[/QUOTE]Salute to Freddie Roach too, for advising Manny not to fight Crawford instead of Jeff Horn too! LMAO!

[QUOTE=Bronx2245;19934151]I'm just happy for Pacquiao, that his team is putting a brick wall around Spence Jr.! Manny does not need that in his life at 41 years old! Mikey or Danny would be much better suited! Props to Buboy Fernandez…

[QUOTE=Boxing Goat;19933875]lol you're like talking to a brick fkn wall[/QUOTE]I'm just happy for Pacquiao, that his team is putting a brick wall around Spence Jr.! Manny does not need that in his life at 41 years old! Mikey or Danny…