It still wasn’t quite the sellout that was announced Saturday night.

According to a Nevada State Athletic Commission report obtained Thursday by BoxingScene.com, 11,436 tickets were sold to the card headlined by Pacquiao and Thurman at MGM Grand Garden Arena in Las Vegas. Organizers of the event also issued 1,675 complimentary tickets to the show, which is 1,245 short of accounting for the announced attendance of 14,356. 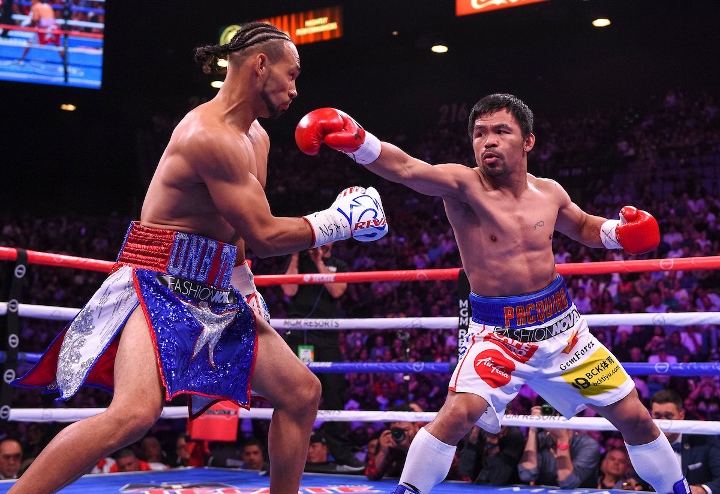 The Pacquiao-Thurman show did robust business at the box office, though, as it produced a live gate of $6,260,275.

The 40-year-old Pacquiao knocked down Thurman late in the first round, badly bloodied his nose during the fifth round and hurt the former 147-pound champion badly with a left to the body halfway through 10th round on his way to winning a 12-round split decision. The Philippines’ Pacquiao (62-7-2, 39 KOs) also won the WBA “super” welterweight title from the 30-year-old Thurman (29-1, 22 KOs, 1 NC), of Clearwater, Florida.

The Pacquiao-Thurman numbers are very similar to the attendance and gate figures from Pacquiao’s last fight, a 12-round, unanimous-decision victory over Adrien Broner on January 19 at MGM Grand Garden Arena.

The NSAC report from that event states that 11,410 tickets were sold and only 248 tickets were comped. That show produced $6,000,032 in ticket revenue.

The announced attendance for the Pacquiao-Broner card was 13,025.

Pacquiao previously was involved in two of the top 10 live gates in Nevada boxing history.

I still haven't heard him say he lost. He had his hands raised after the fight and was annoyed t first Pac got the decision. He has said he had to do better and didn't match his output the whole…

This is very good for Boxing!

[QUOTE=gritsteel;19943088]Even if it made 700k, it will probably be announced as 500K. It's in the best interest of all parties involved if the real higher amount is not known lol, especially the Philippine side. Lucky for Inson who replaced Molina,…

[QUOTE=JuniorTorres720;19938303]There wasn’t that much buzz for this fight? It received top notch promotion by PBC and FOX. The amount of content was deep and there was definitely hype for this fight. I think it’ll do a solid 700k but I…

[QUOTE=.WesternChamp.;19937649]what difference does that make??? if conor would have fought pac or canelo instead of floyd, they would make around the same! +/- a few mills. in fact, the fight might even be bigger based of their style match ups!…