The contest is less than two weeks away, as Pacquiao will be departing to Kuala Lumpur, Malaysia - where the contest is scheduled to take place on July 15 [July 14 in the United States] at the Axiata Arena in that Malaysian capital.

“After spending the past two-and-a-half months in the camp, running the road, sparring and working the mitts, heavy bag, speed ball, etc., I believe we’ve covered everything there is to cover to prepare for this coming fight,” Pacquiao said to The Manila Times. 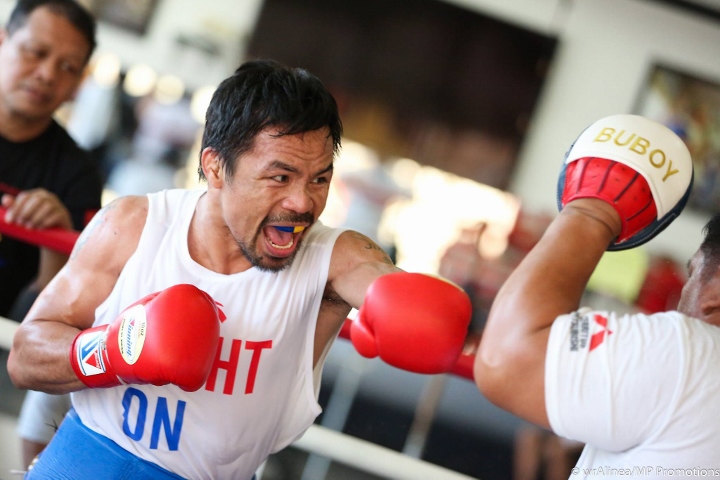 Pacquiao's entire career is at stake in the contest.

Matthysse, who is currently at a high point in his career, believes that he will knock Pacquiao out.

The last time he was seen inaction, the Filipino superstar was losing a controversial twelve round unanimous decision to Jeff Horn in July 2017 at the Suncorp Stadium in Brisbane, Australia.

"Yeah, I feel I’m ready to again climb the ring after a year’s absence following my last fight a year ago," Pacquiao said.

He also parted ways with his trainer of 16 years, Freddie Roach. The move shocked many observers in the boxing industry.

Pacquiao, now 39-years-old, is being prepared for the contest by his assistant trainer and best friend Buboy Fernandez.

Fernandez believes Pacquiao is now 95% ready for the contest.

"Otherwise, what we’ve tried to achieve when we opened the camp has all been achieved,” Buboy said.

According to the boxer's strength and conditioning trainer Justin Fortune, a 45-minute energy-sapping procedure is part of a heavy load that's coming Wednesday - a day that includes a 10-set plyometric exercise program.

“Everything from there would be relatively easy,” Justin assured. “Yeah, there’s still eight-round and probably six-round skirmishes on Thursday and Saturday but those are only routine.”

[QUOTE=Hewito;18912578]If you believe marquez was offered 100 mill to fight pac, you are nuts. Manny vs may sounds about right thou.[/QUOTE] "There was an offer for a fifth fight against Pacquiao in the Philippines for $100 million dollars, and I…

[QUOTE=Hewito;18912578]If you believe marquez was offered 100 mill to fight pac, you are nuts. Manny vs may sounds about right thou.[/QUOTE] it came from marquez himself lol.

Manny ain't fighting Mayweather again, no matter what. Nobody wants to see that again. I doubt he'll go after Lomachenko either. If Manny gets by in this fight I'd like to see Mikey Garcia challenge him if he gets by…

[QUOTE=WesternChamp;18912142]lol.. marquez already passed on $100 mil offer to rematch pac.. we'll prolly get to see floyd vs manny 2 before we get to see a pac vs marquez 5 lol.[/QUOTE] If you believe marquez was offered 100 mill to…

[QUOTE=Bluebird;18912276]It didn’t look like Marquez wanted a 5th fight with Pac but you’re right, we will probably get to see a Pac vs Mayweather 2 before that because Mayweather just went to the Philippines recently, now that Pac got rid…