The Pacquiao vs. Matthysse fight, which is dubbed “Fight of Champions,” is two and a half months away and is set at the glitzy Axiata Arena in Kuala Lumpur on July 14, US time. 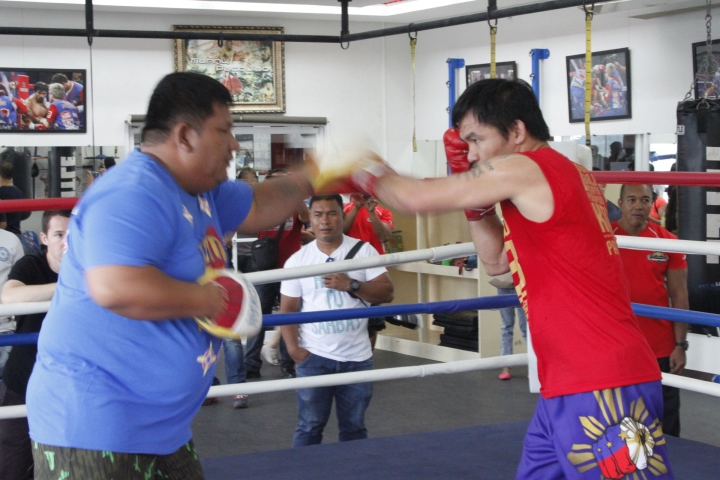 “I am excited to return to the ring once again and face a dangerous champion in a difficult and challenging fight,” said Pacquiao, the only eight-weight division champion in boxing.

“I am inspired as I am also excited to face the champion,” added Pacquiao, noting that Matthysse packs power on both fists having won 36 of his 39 wins by knockout.

Pacquiao, the 39-year-old challenger, did mitts work with Fernandez, his boyhood neighbor and trusted lieutenant throughout his career. Both started slow and hoped to pick up steam in the middle stages of training camp. In his familiar workout, Pacquiao pounded the heavy bags and finished with his usual abs work routine.

Also a senator of the Philippines, Pacquiao is taking full use of the senate recess to train without distractions before resuming work on May 14 to June 1 when the Philippine Senate reconvenes. Then, Pacquiao gets his final push for the whole month of June up until fight day, July 15 in Kuala Lumpur.

Pacquiao is also the promoter of this boxing extravaganza which promises to be the biggest boxing event in Malaysia in the last 43 years since Muhammad Ali faced Joe Bugner, also in Kuala Lumpur.

Aside from the Pacquiao-Matthysse headliner, three other world title fights are in store for the undercard as well as other intriguing supporting bouts being assembled by Pacquiao’s MP Promotions.

[QUOTE=revelated;18731580]Bold is salient point here. And it reinforces the fact: people held out for Manny to beat Floyd, and abandoned him when he failed.[/QUOTE] Again, Pac still makes way more than 90% of the boxers today... I am not crying…

[QUOTE=boxinggod101;18729460]Pac was one of the top paid athlete [B]before he fought Floyd[/B]... If u sad for him, u must be very wealthy[/QUOTE] Bold is salient point here. And it reinforces the fact: people held out for Manny to beat Floyd,…

[QUOTE=revelated;18728343]Comparing how much Floyd helped him make with light touch punches, to what he ended up making after getting bullied around the ring by the Hornet, yes it's sad.[/QUOTE] Pac was one of the top paid athlete before he fought…