Pacquiao: I Still Have a Couple of More Fights Before I Retire

Eight division world champion Manny Pacquiao insisted Friday that his advancing years were no barrier to success as he gears up for a showdown against world champion Lucas Matthysse.

The Filipino has won an unprecedented eight world titles in different weight classes but some have raised questions about his ability to box at the top of his game due to his age. 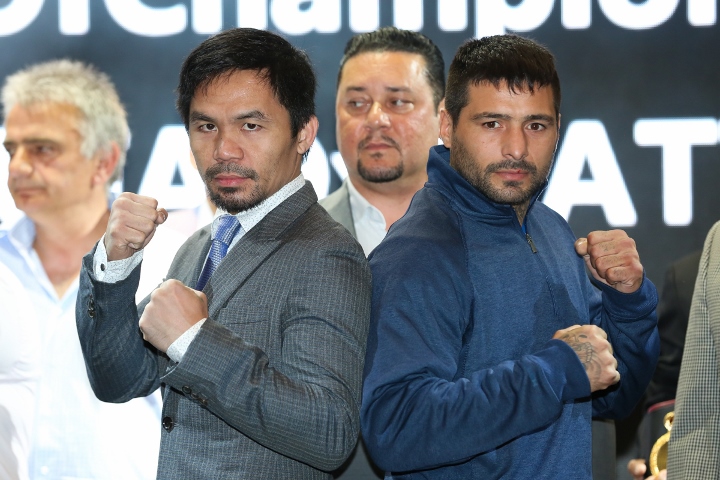 But at a joint press conference with Matthysse in Kuala Lumpur, he dismissed such concerns.

"It depends how you discipline yourself in training, how you prepare."

Pacquiao said that the fight against Matthysse would not be his last, as he wants the final bout of his career to take place in his homeland.

"Definitely this is not my last fight," he said. "I think I still have got a couple of more fights (until I) retire."

Pacquiao is currently a senator in the Philippine parliament and many in the country believe he will one day run for president, although the boxer has insisted he is happier in the ring than politics.

He conceded that it was "not easy" to juggle being a top-level boxer and politician.

Matthysse -- who took the vacant WBA 'regular' welterweight title in January -- has expressed confidence that he can beat Pacquiao, describing the Filipino as a diminished star.

At Friday's press conference, he said he was a "pretty big puncher with both hands, so that gives me a lot of confidence".

Pacquiao has not fought since he lost his World Boxing Organization welterweight crown in a shock points defeat to Australia's Jeff Horn last year, and has not knocked out an opponent in nearly nine years.

The Kuala Lumpur bout will likely mark the first time in 15 years that Pacquiao will be fighting without his long-standing trainer Freddie Roach, who expressed hurt last week after saying ties have been cut.

The boxer has suggested that role might go to his own friend and compatriot Buboy Fernandez, at least for the Matthysse bout.

No no one more then it's quits

[QUOTE=revelated;18691290]I maintain: if Manny didn't like what was happening to him, DO SOMETHING about it. What was that fight where the guy kept hitting the other guy low, the ref lost control and the guy that kept getting hit low…

[QUOTE=gamesworn;18689057]Translation: "I want to get KTFO before i quit" Im a huge fan but he needs to retire asap. There is no passion and dedication in boxing on him anymore, only money. First, he lost his dedication to boxing, running…

[QUOTE=Lomasexual;18690062]He lost. The judges called it, the judges who reviewed the fight confirmed it. It had nothing to do with being in Australia. The judges (and the review judges) and the ref were not Australian. People who spot conspiracies where…

[QUOTE=JcLazyX210;18691145]Idk man. His power hasn't been there in years. I personally think at this point they (Maybe ) are on equal footing. Especially since Manny left Freddy.[/QUOTE] Manny put Jessie Vargas on his ass. I guarantee you Khan will suffer…