Pacquiao: I Don't Feel 40, I'll Continue as Long as I Can Still Fight

After so many years (he started when he was 12), so many fights (69) and so much money earned (more than $400 million, according to one report), the question for Manny Pacquiao is obvious: Why continue to fight?

Of course, money remains a factor whether Pacquiao acknowledges it or not. Who among us wouldn’t prolong a career in which we command seven figures-plus?

Pacquiao stands to collect another windfall when he faces Adrien Broner on pay-per-view January 19 in Las Vegas, which arguably is his biggest fight since he outpointed Jessie Vargas in November 2016. 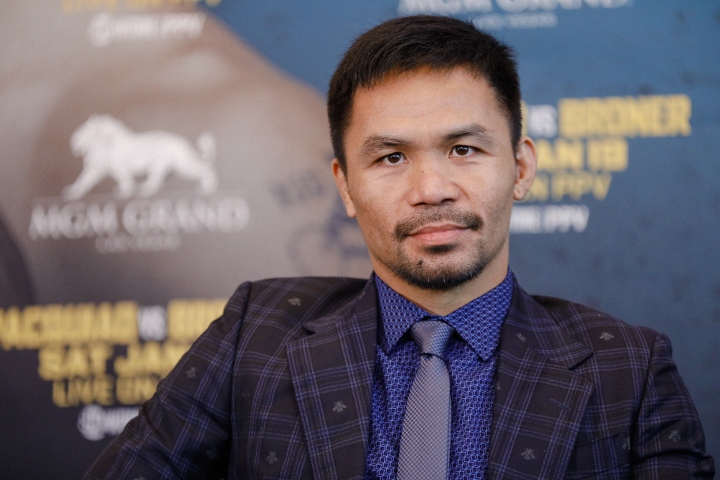 And the possibility of a lucrative rematch with Floyd Mayweather looms. They spoke in Japan recently about a second go-round, although nothing is set.

But Pacquiao insists he returned from “retirement” after outpointing Tim Bradley in June 2016 and remains an active boxer for a reason that’s more pure: He loves the sport.

“I was watching some fights and I was feeling so lonely,” he said. “I was feeling lonely even though I’m busy with work in the senate. I really missed boxing. … Boxing is my passion, I grew up with boxing. That’s the reason.”

How much longer can his body hold up, though? Pacquiao has put it through a great deal over the past two decades-plus, including a shoulder injury that he says hindered his performance against Mayweather in 2015.

He said on Tuesday that he feels good physically, although he doesn’t train as intensively as he did as a young fighter. He still works hard but gives his body more time to recover between sessions, which he believes is essential for all fighters in the twilight of their careers.

“Now I’ll take time, one day rest. That’s a good thing to learn at this age.”

Pacquiao said he trained only one day in the final week before he fought Matthysse. The result: He scored his first knockout since he stopped Miguel Cotto in 2009, when the Filipino icon was at the height of his powers.

“I felt stronger in that fight,” he said, a reference to his measured approach to training.

And how will he know when it’s truly time to walk away? That’s not complicated.

“I’ll continue in boxing,” he said, “as long as I can still fight.”

He won't feel 40 until he ends up on his back, then he will feel 40+ but until that time he may as well keep running on his reputation and taking ******* money.

[QUOTE=MinuteMaid5;19330626]I don't know man that left hook from Broner might put him to sleep.[/QUOTE] Anything can happen that’s for sure. If maidana had Broner like he did lol Manny surely can. Again anything can happen. If people think boxing is…

[QUOTE=PAC-BOY;19323342]I really cant see where BUD has done anything great and opposition has been lame. Cant see him beating this version of Manny and definitely not the 3yr ago manny[/QUOTE] I don't know man that left hook from Broner might…

[QUOTE=MinuteMaid5;19290113]Its crazy because i have Spence beating Crawford but i see Crawford giving pacquiao problems[/QUOTE] I really cant see where BUD has done anything great and opposition has been lame. Cant see him beating this version of Manny and definitely…

he will keep going, we all knew that