Pacquiao Feels Brunt of Long Flight, Takes Off From Training

Eight division world champion, "Fighter of the Decade" and Philippine senator Manny Pacquiao skipped training on Monday afternoon in the Wild Card Gym of trainer Freddie Roach but had "a good, hard run" at Griffith Park in the morning.

Longtime adviser and confidant Michael Koncz informed BoxingScene.com/Manila Standard that he "canceled training in the afternoon because he wanted Manny to rest due to jet lag" from the long and tiring flight from Manila to Los Angeles on Sunday night.

The future Hall of Famer arrived in LA on Monday evening to complete the final two weeks of training at coach Freddie Roach's Wildcard Gym. 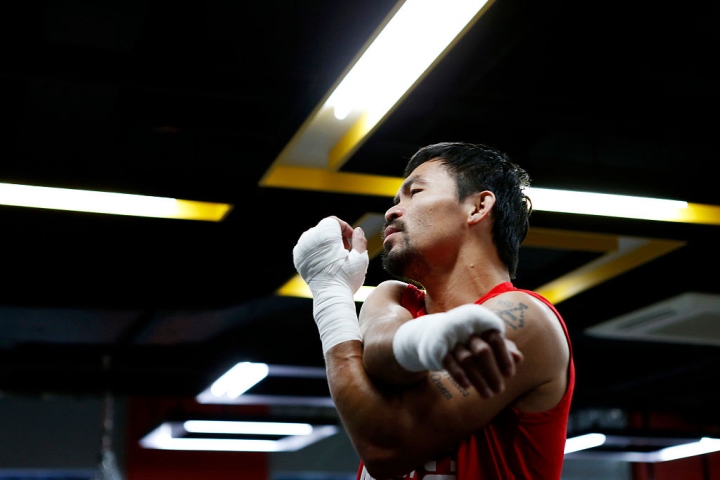 Although the Filipino boxing legend will turn 38 years old in December, and is currently juggling Senatorial duties with the rigors of intense training, seven-time trainer of the year Roach is amazed at how energetic his superstar has appeared in camp.

Roach recently told Top Rank Boxing - "I like what I see."

Fight Saga quoted Roach who said - "I told him, this is how you win big, big fights...like the old Manny Pacquiao. I don't know what did this, but he looks terrific right now. His bounce, his distance, his speed, his power...I said to keep that going, just like that, and don't let anyone change your mindset. His mindset is perfect right now."

The heralded boxing coach understands how hard Manny can realistically push himself at age 37, and knows when his fighter should be "peaking" while preparing for a big event. Remarkably, Freddie has been genuinely surprised at the progress he's seen while preparing for Jessie Vargas.

“I have been training Manny for 15 years and even after all this time he still amazes me. He's pushing 38 and he still outworks every fighter I've ever worked with. He's had a killer schedule during this training camp but it's been really productive."

Fellow Wildcard fighter and sparring partner, Jose Ramirez, has been impressed while working with Pacquiao at the Elorde Gym in Manila.

Good to see Pac, a pity hes supporting that retarded little monkey who is currently Pres of Phillippines

Gonna be another decision for Pacquiao. Very doubtful he can get the KO these days. 5 or 6 years ago this would be 2 or 3 round wipeout.

[QUOTE=JASON SHAW;17147507]Poochquiao the dirty politician always making excuses before and after fights........ Excuses are like oxygen for politicians...... They cant help themselves....[/QUOTE] u probably never left ur hood but if ever you traveled to asia u would know that the…

Poochquiao the dirty politician always making excuses before and after fights........ Excuses are like oxygen for politicians...... They cant help themselves....