Is Pacquiao Destined To Suffer The Fate of Ali, Leonard & Others?

A lot of aging fighters – including many great ones – stay too long.

And it’s easy to understand why. They believe they can still fight when sometimes they can’t, at least not the way they used to. They wouldn’t know what to do with themselves if they weren’t training. And, perhaps most important, they often can still make a good living even though they’re in decline.

The down side is that the result of fighting even one time too many can be a disturbing beating. From Ali to Leonard to De La Hoya to Hopkins, the examples are many.

Which brings us to 40-year-old Manny Pacquiao, who is scheduled to fight unbeaten 30-year-old Keith Thurman on July 20 in Las Vegas.

The difference between Pacquiao and many other great fighters nearing retirement is that he CAN still fight, as he demonstrated by easily outpointing four-division titleholder Adrien Broner this past January. He can beat all but a few of the top 147-pounders.

The problem for Pacquiao? Thurman is one of those few, which could lead him down the same ill-fated path of his great predecessors.

Thurman might be right when he said this week, "I'm going to do to Manny Pacquiao what Manny Pacquiao did to Oscar de La Hoya,” an ominous reference to Pacquiao’s brutal, career-ending knockout of the Golden Boy in 2008.

A case can be made in Pacquiao’s favor, perhaps a strong case. Again, he was impressive against Broner. He isn’t the volume puncher he was in his heyday and has little power at 147 pounds – he has only one knockout in a decade – but he’s always fit, has retained much of his quickness and still throws enough shots from those crazy angles to remain competitive with almost anyone.

Plus, there are questions surrounding Thurman. He peaked when he outpointed Shawn Porter and Danny Garcia is 2016 and 2017, establishing himself as an elite talent, but then went down from injuries and was away for two years. He looked so-so in his return against Josesito Lopez in January, which he won by majority decision.

Was Thurman’s performance the result of ring rust? Or has the time away done more significant damage? We won’t know whether Thurman has regained his pre-hiatus form until he steps into the ring with Pacquiao at the MGM Grand. 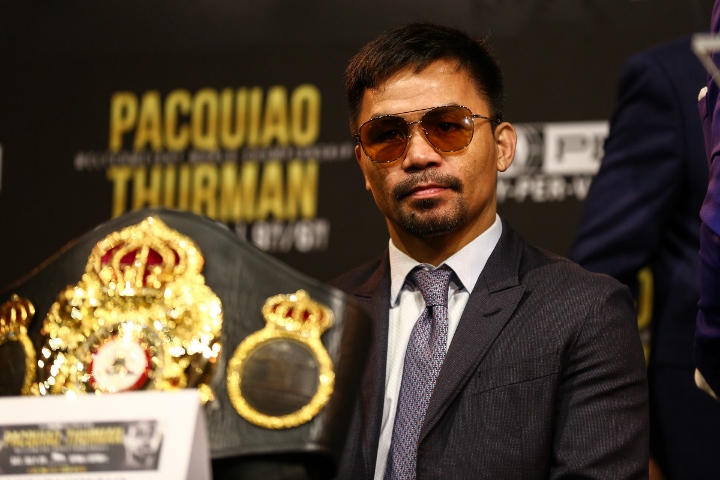 And, frankly, I’ve always had doubts about Thurman. The WBA titleholder obviously is gifted and you can’t argue against his record (29-0, 22 knockouts) but he has fought too carefully for my taste, especially in his biggest tests, as if he was fighting not to lose rather than taking the risks required to be great.

One, while Pacquiao’s victory over Broner was impressive, it might not be a good idea to read too much into that fight. Broner was formidable at 135 pounds and below but only solid above that weight. And he hasn’t thrown enough punches in recent fights – only 25 per round against Pacquiao, according to CompuBox – to succeed.

Two, there generally is a big difference between a 40-year-old and a 30-year-old in terms of physical attributes, particularly a quick, athletic 30-year-old like Thurman. Pacquiao simply can’t match Thurman’s tools at this stage of the old man’s career.

That’s why this week he has tried to goad Thurman into a toe-to-toe battle, saying “Keith Thurman is aggressive and throws a lot of punches. I’m hoping on July 20 he will follow through with what he says and fight toe-to-toe with me.” Pacquiao knows it will be difficult to chase down Thurman, if that’s what it comes down to.

Three, this is a matchup between a small welterweight (Pacquiao) and one who has fought at the weight or slightly above it his entire career (Thurman). That also will work in the titleholder’s favor.

And, four, Thurman knows this is the opportunity of his career, his chance to demonstrate that he’s not merely a good fighter but a special one. He will never be more motivated.

All that is why I fear for Pacquiao. It’s not difficult to envision a one-sided beating that brings back awful memories of other Hall of Fame fighters who needed such a pounding to convince them to retire.

I hope I’m wrong. I hope Pacquiao has enough left to be competitive with Thurman and walk out of the ring under his own power, with his head held high.

Great fighters have been known to extract one last great performance out of themselves late in the game.

I worry that I’m right.

“As I have been saying, I feel I’m 29 years old like when I fought Oscar. Sana, he (Thurman) can prove his words in the ring. I’m going to be a warrior on July 20 and show Keith Thurman what…

[QUOTE=Fighting_Pride;19772650]Pacquiao is now in the twighlight of an illustrious career and his priorities might be spread out in a million direction but the one thing we cannot deny is the skill level he still retains and can still compete with…

[QUOTE=The plunger man;19772515]I love Pacquiao and have been his biggest fan and still is but don’t let your stir crazy love and over fanboyism cloud your judgement. Leonard would have broken Pacquiao down and stopped him. Leonard is To big…

[QUOTE=OldTerry;19771127]I can see Thurman winning or losing against Pacquaio. I don't see Thurman having much chance against Spence or Crawford. So that means we see eye to eye.[/QUOTE] This. I never saw why people rated Thurman so high. The gap…