Pacquiao Confident: Thurman Senses What is Coming His Way

It’s a guy who’s been active since 1995, when the other guy was in first grade.

And it’s a veteran with 70 fights against an opponent with fewer than half that number.

Nevertheless, to hear the old geezer – Manny Pacquiao, in this case – and his equally grizzled trainer tell it, it’s the youngster who’s at every possible disadvantage heading in.

Yes, Keith Thurman, that means you.

“If you look at his last few fights, he’s really faded in each one of them. And I do feel like he possibly has an injury that has not healed,” the aforementioned trainer, Freddie Roach, told Boxing Scene.

“He usually relies on that big overhand right and lately he hasn’t had any success with it. He sets it up with a pawing jab and then goes with the big overhand right and his timing is just way off right now, especially in the last three fights. You look at him in his earlier career and he was knocking guys out with that shot. The last three fights he’s not knocking out anybody with nothing.”

Thurman will encounter boxing’s multi-generational dynamic duo on July 20 in Las Vegas, when “One Time’s” WBA welterweight title belt is on the line in a Showtime pay-per-view show at the MGM Grand.

It’s Thurman’s fourth defense of the full-fledged crown he’s worn since Floyd Mayweather Jr. exited in late 2015, and a big-stage fight he’s been calling for since first cracking the top 10 a few years prior.

But the challenger, beaten by Mayweather in “Money’s” penultimate title defense, is just as certain that the Floridian’s ambitious mouth is writing checks that his fists won’t be able to cash come fight night.

“I will not really know until I am in the ring with him, but I believe I have the better speed and footwork.  I certainly have better experience against better opponents,” Pacquiao told Boxing Scene. “Keith Thurman is going to be surprised by what he sees from me. I have heard what he has said. The more he trash talks the more his insecurities show. I know he senses what is coming his way.” 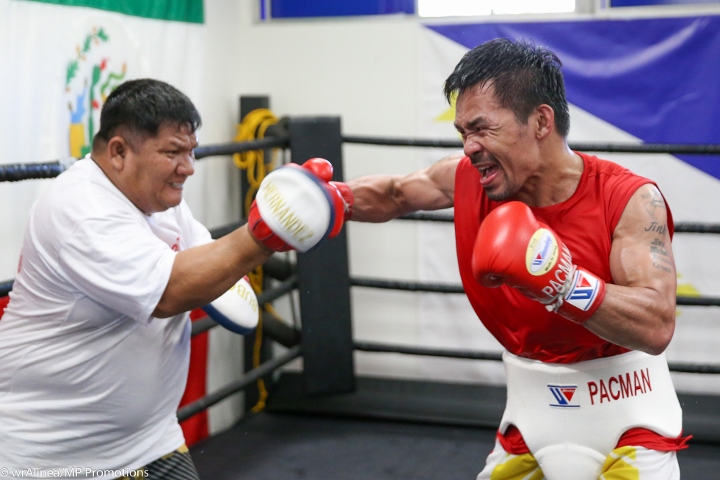 Boxing Scene recently caught up with Roach and Pacquiao on consecutive days to discuss preparation for the Thurman fight, the specific advantages the older man may indeed have and how the action is likely to unfold – from their perspective, at least – once the bell rings.

Boxing Scene: Is the setup with the team the same as it was for the Broner fight? Are you in the same role?

Freddie Roach: My role is back to being No. 1. I’m the guy who calls the shots. I’m the one who picks (Pacquiao’s) sparring partners to come in. Manny said that’s the way we’ve always done it and we always will. We’re having a really, really good training camp and everything’s going quite well.

Boxing Scene: How much different is it, if at all, to train him at age 40 than it was at 30? Do you approach things differently and lay off once in a while or is he the same as he’s always been?

Freddie Roach: He’s a workaholic. He likes to work. He works his ass off. His work ethic is unbelievable. I do have to slow him down a little bit. This morning when I saw him he was getting up for roadwork, and I told him ‘Stay in bed you don’t have anything today’ and I started tying him up with a rope. Just to play a little joke on him and let him know. I said ‘Don’t overdo it, you’re right on schedule.’ He’s right where I want him to be at this point.

Boxing Scene: Are there certain fights you look at Thurman and you see when he’s changed? Do they leap out?

Boxing Scene: Thurman’s a confident guy. He says he wanted this years ago, and that he’ll beat Pacquiao now, too. Had the fight been made when he was 24 or 25, how would it have been different?

Freddie Roach: Five years ago he was probably a better fighter and Manny was a better fighter. Two younger guys going in there. It would have been a good match. But I think this one’s going to be a good match also. I’m extremely calm and confident in winning this fight because of the work ethic of my fighter. I know that we’re fighting a real fighter and I know he’s 10 years younger. Believe me I’ve put all those calculations together, and Pacquiao is still just a better fighter at this point. Manny has not slowed down at all. His work ethic is just unbelievable. He’s the same Manny Pacquiao I met 22 years ago.

Boxing Scene: Is the margin between Manny and Keith the same as it would have been five years ago?

Freddie Roach: You’re talking about an era of boxing when Manny boxed six days a week back in the day, a six-day work schedule, and we’ve cut back to a lighter schedule because everyone does get older. By no means has he showed any signs of fatiguing at all, but I’ve just got to watch him a little bit and make sure he doesn’t overdo it because he does have a tendency to like to overdo it.

Boxing Scene: Are you surprised that we’re still doing this at 40 and he’s fighting 30-year-old guys. Did you see this still happening five years ago?

Boxing Scene: Before Broner, you seemed fairly confident Floyd would come back and it’d get done. Are you less so now?

Freddie Roach: He’s not too talkative about it lately. He’s more interested in fighting a kickboxer. Let’s fight a kickboxer but not change the rules. Again, we would like to have Mayweather one more time. We’re a little embarrassed about the way the first one went. It didn’t live up to what it was supposed to. We’d like that one back one more time. If Mayweather doesn’t come to the table, though, we’re not done with boxing yet. We still have fights in us. If those other two guys step up and want to fight we’re not going to say no.

Boxing Scene: Do Crawford and Spence rev him up as much as Floyd?

Freddie Roach: We both want Floyd tremendously because, again, we’re both embarrassed the way that fight went. At the fourth round Manny told me he couldn’t use his shoulder anymore, I said ‘Do the best you can’ and that was all we could do. We’d like to get that one back because we didn’t fight the best fight we could and we feel we can do much better.

Boxing Scene: How does July 20 look? How do we know it’s Manny’s night?

Freddie Roach: His speed factor will be the controlling part. Everyone says they get ready for fast fighters, but once they get in there with Manny Pacquiao the speed will take over. That will overwhelm our opponent and that’ll be the beginning of the end.

Boxing Scene: You've been through this many times before. How does preparation for Thurman compare to past fights? Similar/different?

Manny Pacquiao: My preparation is similar to how I trained for Matthysse and Broner. I go full out in training camp, but now that I am 40 I will take a day off occasionally to let my body recover fully when it becomes necessary. Freddie, Buboy (Fernandez) and Justin (Fortune) seem as in tune with condition as I am. It really helps.

Boxing Scene: Do you approach anything differently at age 40 than in your 20s or 30s?

Manny Pacquiao: Yes. In my 20 and 30s I would never think of ever taking a day off. I could train forever, 25 to 40 rounds daily. Now, I work just as hard but I listen to what my body tells me and I feel great. Rest has become a new vitamin for me. It is an essential element of my training diet.

Boxing Scene: Your resume of big fights isn't matched by many fighters. This is his first pay-per-view main event. How much of an edge does that provide?

Manny Pacquiao: I still get excited when I enter the ring for a big fight. Focus and discipline will be essential. I am sure he will be able to handle the moment.

Boxing Scene: What challenges do major fights like this provide? What's the biggest element to get used for one of these to as opposed to a routine fight?

Manny Pacquiao: I still enjoy training camp. It feels like a vacation for me. All training camps are the same for me. I work hard. No shortcuts.

Boxing Scene: Bottom line, how will this fight look come July 20? What will success look like?

Manny Pacquiao: There is a big percentage this fight will not go 12 rounds. That is not a prediction but my analysis.

WBA “world” middleweight title – Osaka, Japan
Rob Brant (“champion”/No. 7 IWBR) vs. Ryota Murata (No. 4 WBA/No. 10 IWBR)
Why it’s trash: You want to regard it as a worthwhile return bout between a pair of world-class middleweights? Cool. I’m in. But Gennady Golovkin was the WBA’s top middleweight and he lost to Canelo Alvarez. Until they’re involved, it’s not a title bout. And if you disagree, you’re the problem.

[QUOTE=Curtis2;19889518]Will this PPV fight reach 200K buys??[/QUOTE] I think asking that of the Spence vs Porter fight is more fitting. Pacquiao is the only ppv star in the WW division

[QUOTE=Curtis2;19889518]Will this PPV fight reach 200K buys??[/QUOTE] I think asking that of the Spence vs Porter fight is more fitting. Pacquiao is the only ppv star in the WW division

Easy work for the old man. Run Time simply does not engage anymore and he’ll struggle with Pacquiao’s speed.

[QUOTE=Dramacyde;19888673]Pacquiao getting his ass whooped & probably Knocked out[/QUOTE] Sure thing. Care to put all your points on that? :boxing:

That’s basic he is genius, let’s see if can run s mile at 41 not fight a prime top 3 ww champ