Philippine senator and eight division world champion Manny Pacquiao was mobbed by the media and fight fans when he  arrived at the Los Angeles International Airport at 7:30 p.m. Pacific Time on Saturday aboard a Philippine Airlines flight from Manila.

Pacquiao arrived with his charming wife Jinkee and members of his entourage including Hall of Fame trainer Freddie Roach and longtime adviser Michael Koncz.

Manny had his final sparring session at the “Flash” Elorde Gym in the Mall of Asia complex in Pasay City behind closed doors on Thursday and a final workout on Saturday. 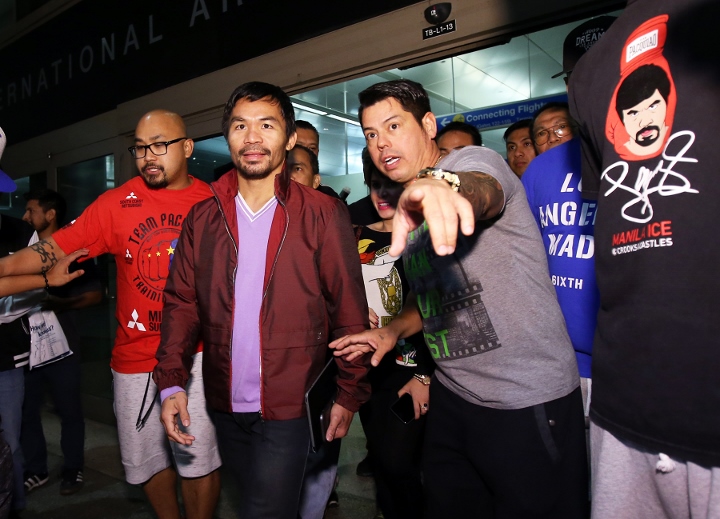 Strength and conditioning coach Justin Fortune who left for LA last Monday told us he expects Manny to have at least three more sparring sessions before his showdown with Jessie Vargas for Vargas’ WBO welterweight title at the Thomas & Mack Center on November 5.

The fight card which will also include five division super bantamweight champion Nonito “The Filipino” Flash in a title defense against unbeaten Jessie Magdaleno will be telecast by Solar Sports and GMA 7 as well as on pay-per-view over Sky Cable and Cignal TV.

Pacquiao has had some ferocious sparring sessions with the 5’10” Jose Ramirez who approximates the style of Vargas.

After six rounds of sparring last Saturday, Ramirez told BoxingScene.com/Manila Standard “while it’s been a tough camp for Manny, he is going to be more than ready when he faces Vargas on November 5.

On Monday, October 24, Manny will begin phase two of his training camp, at Wild Card Boxing Club in Hollywood, for his challenge of World Boxing Organization (WBO) welterweight world champion Jessie Vargas who has a record of 27-1 with 10 KOs.

While Pacquiao will be looking to become a three-time WBO welterweight champion as well as the first senator to win a world title, Vargas will be resolute in enforcing a term limit on the future Hall of Famer's boxing career.  In a wide-ranging exclusive interview with BoxingScene/Manila Standard, Vargas said he is “much stronger today” than when he scored an impressive 9th round KO over Sadam Ali to win the title last March 5 and wants to “go above and beyond that performance and out on a better performance when he faces the “Fighter of the Decade” on November 5.

Vargas said he has gradually increased training every day and “everything is coming along smoothly.” He maintained that if he sees an opening he’ll go for a knockout and mentioned round eight.

However, Pacquiao in an interview with the BoxingScene/Manila Standard before he left for LA said “that is easy to say but hard to do. That is impossible. God is with us, who can be against us.?”

He maintained that he is “inspired and is always dedicated to my work. You know me, how I work hard in the gym. That’s the only way I can make boxing easier.”

Trainer Roach noted  "I have been training Manny for 15 years and even after all this time he still amazes me. He's pushing 38 and he still outworks every fighter I've ever worked with.  He's had a killer schedule during this training camp but it's been really productive. You'd have to see it to believe it."

While there were days the demands of his senatorial duties appeared to tire him out and he looked somewhat flat in sparring, there were other days when Manny was “devastating.”

Former two division world champion Gerry Penalosa who closely follows Pacquiao’s training schedule said that from what he’s seen in Manila, Manny is 90 percent ready and he expects him to score an impressive stoppage within 8-10 rounds and that if Vargas hopes to win by a knockout "he is dreaming.”